According to the Department of Homeland Security, which oversees the US Citizenship and Immigration Services (CIS) agency, 1,046,539 people became naturalized US citizens in 2008 — a new record. Naturalizations by Hispanics doubled over 2007 to 461,317 and account for nearly half. CIS says they were trying to beat an increase in the citizenship application fee, which went from $330 to $595, but also notes “special efforts” of Spanish-language media, pressure groups, and immigrant-heavy unions to get Hispanics to naturalize. It also helps that many Hispanics can retain their original nationality even if they become US citizens. The Pew Hispanic Center in Washington says a record 12.7 million Mexicans were living in the US in 2008, a 17-fold increase since 1970. Mexicans make up one third of all immigrants to the US, and nearly 11 percent of all people born in Mexico now live here. Of the 11.9 million illegals Pew estimates are in the country, 60 percent are Mexicans.

The dominance of Mexican immigrants can be seen in the widespread acceptance of Cinco de Mayo as a de facto American holiday. May 5 is the anniversary of a Mexican military victory over French occupying forces at the Battle of Puebla in 1862. It is celebrated in the Mexican state where the battle took place, but is largely ignored elsewhere. Hispanic boosters, beer companies, and the media have made Cinco de Mayo a day for Americans to recognize and “celebrate” Hispanics.

“Cinco de Mayo is a Mexican holiday, but it also brings a lot of the Hispanic community together,” says Rodrigo Sanchez-Chavarria, a Chicano studies senior at the University of Minnesota and a La Raza board member. Not all Hispanics agree. Dagoberto Reyes, a Salvadorian immigrant in Los Angeles, says the holiday is a reminder of the ascendancy of Mexicans. “Our kids go to this school system, and the school system is more preoccupied with Mexico’s history, and not the rest of Latin America’s, much less El Salvador’s,” he complains. “They came back celebrating Cinco de Mayo. That holiday means nothing to us.” [Jens Krogstad, University Community Celebrates Cinco de Mayo, Minnesota Daily (Minneapolis), May 5, 2009. On 5/5, Mexican Dominance Irks Other Latinos, AP, May 5, 2009.]

Zuma and the Afrikaners

On May 6, the South African parliament elected Jacob Zuma the fourth president of post-apartheid South Africa. Mr. Zuma’s election was a formality given his earlier election as president of the African National Congress, which has run the country since 1994. Who is Mr. Zuma and what can whites expect from him? Dan Roodt, an Afrikaner writer and activist (and 2006 AR conference speaker) has some insights. “Mr. Zuma” he writes, “is a colorful figure who probably could not become head of state anywhere but in Africa. He is a former anti-apartheid guerilla leader whose theme song is ‘Bring Me My Machine Gun.’ He was Thabo Mbeki’s deputy president until 2005, when he was fired because of alleged corruption. The case against him dragged on until April, when charges were finally dropped. Mr. Zuma, who had gotten revenge for his firing by toppling Mr. Mbeki as ANC party leader in 2007, argued that he had been framed by political enemies.

Mr. Zuma was also tried in 2005 on rape charges, but acquitted after the woman was unable to prove that the encounter was not consensual. There was considerable public derision over the fact that Mr. Zuma admitted that he knew the woman was HIV-positive but claimed he had taken necessary precautions after unprotected sex by showering. In a typical absurdist post-script to the case, the woman who brought the charges, Fezeka Kuzwayo, was granted asylum in the Netherlands in 2007. She convinced the Dutch she was in danger from Mr. Zuma’s supporters.

Mr. Roodt reports that Mr. Zuma has made overtures to Afrikaners, telling a group of Afrikaner leaders in April that “of all the white groups that are in South Africa, it is only the Afrikaners that are South Africans in the true sense of the word . . . They are here to stay.” What is driving the Afrikaners and Mr. Zuma into each other arms is “the age-old political logic of ‘my enemy’s enemy is my friend.’ Apart from Mr. Zuma’s strong following among Zulus and ordinary black South Africans, he enjoys almost no support or sympathy from local and international elites. As a Zulu, he is also something of an odd man out in a party now dominated by Nelson Mandela’s Xhosa tribe. Afrikaner support would be very useful to him.” 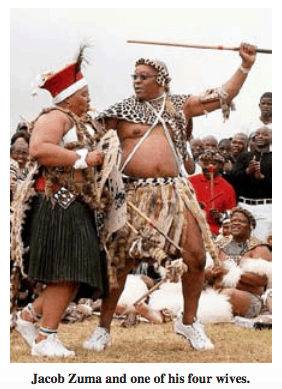 Africa on the Mall

In April, the Smithsonian announced the winning design for the building: a bronze crown meant to “evoke historical imagery of African-Americans.” Lead designer David Adjaye of the architectural firm Freelon Adjaye Bond is a Tanzanian immigrant who works in New York and London. He says the building is supposed to evoke “traditional headdresses worn by African-American women, as well as the colonial crown from Africa and the idea that a hat-wearing person is a free person . . . who doesn’t have to carry a load but could wear a hat.”

Construction is to begin in 2012, with completion scheduled for 2015. Taxpayers will pick up half of the estimated $500 million price tag. There is already a museum of African art on the Mall. [Smithsonian Picks Black History Museum Designer, AP, April 14, 2009.]

Youth for Western Civilization (YWC) is a new campus group that calls itself “the West’s right wing youth movement.” It seeks to “inspire Western youth to organize on the basis of identity . . . and counter radical multiculturalism on campus.” It says it hopes to “counter and ultimately defeat leftism on campus” and “create a social movement on campus where a right wing subculture . . . will provide a healthy alternative to a poisonous and bigoted left wing campus climate.”

College left-wingers accuse it of being a “hate” group. “‘Western’ is a veiled term that means ‘white,’” says University of North Carolina graduate student Tyler Oakley. “YWC’s message is essentially a negative one, an assault on not being white or non-Western, and is therefore hateful, if not blatant hate speech.”

Mr. Oakley was one of the organizers of a Students for a Democratic Society (SDS)-led disruption of a YWC-sponsored speech on immigration that former Colorado Congressman Tom Tancredo tried to deliver at the University of North Carolina at Chapel Hill on April 14. Hundreds of protestors screamed obscenities and tried to shout down Mr. Tancredo, while university administrators stood by silently. Minutes into the speech a protestor smashed a window, leading campus police to cancel the event.

Police had to use pepper spray to clear the crowd, and arrested one student on charges of disorderly conduct. The university, which prides itself as a bastion of free speech, was embarrassed — university officials later called Mr. Tancredo to apologize — but the protesters were unrepentant. Mr. Oakley, the SDS radical, is pleased that the congressman “was not able to practice his hate speech.”

Kwame Kenyatta is a Detroit city councilman who wants to be mayor, but his political aspirations suffered when it became known that he walked away from his mortgage last December. Mr. Kenyatta, who makes $81,000 a year as a councilman, bought the house for $225,000 before the real estate market collapsed. His monthly payment of $2,600 was set to increase by $1,000, while the value of the house had dropped to $100,000. Mr. Kenyatta defended his actions: “It’s not like I’m making out like a fat rat here. The credit is now going to be shot.” The councilman is not the only local politician with mortgage problems. The county District Attorney’s Detroit house is already in foreclosure.

Mr. Kenyatta’s hopes to be mayor are undimmed. “History will show that some of the greatest leaders who did great work for the public may not have done so good by themselves,” he says. “In most cases, they neglect themselves to take care of the people’s business.”

Frank Ricci is a white veteran fireman in New Haven, Connecticut. In 2003, the city offered an exam for promotion to lieutenant and captain. Mr. Ricci took the test and finished sixth among the 77 candidates. New Haven spent $100,000 on a test that was supposed to be free of “racial bias” but no blacks passed, putting the city in a bind. It could accept the results, which meant it would be sued by blacks claiming the test was biased, or it could ignore the results, hoping the whites would keep quiet. It threw out the results, but the whites did not keep quiet. Frank Ricci and his fellow whites (and one Hispanic) sued. When a federal court ruled against them in 2006, they appealed to the US Supreme Court, and on April 22, the justices heard oral arguments in what could be a landmark case.

New Haven claimed, and the lower court agreed, that there was no discrimination because no one was promoted. The firemen argue that the city was bound by its own civil service rules to promote the highest scorers without regard to race. The Obama administration waffled, saying the case should be sent back to the lower court to see if the city really discriminated against whites.

The case reveals what happens when “civil rights” laws ignore race and IQ. The law requires color-blind promotions but bans job tests that whites are more likely than blacks to pass. There is virtually no meaningful job test on which blacks score as high as whites, so most job tests are invalidated because of “disparate impact.” Disparate impact is said to be proof that the test was biased, not that blacks (or Hispanics) were less capable or did not study as hard.

In 2005, the National Collegiate Athletic Association, which sets the rules for college sports, banned the use of Indian mascots and names in post-season tournaments. The NCAA does not make teams change their names or ban them from the post-season; they just can’t wear jerseys that say “Indians” or “Braves” or have a mascot who wears a head dress or carries a tomahawk.

The NCAA also urges members not to compete against schools that use “Native American nicknames, imagery or mascots.” A school such as the University of North Dakota (UND), which uses the nickname “Fighting Sioux” and an Indian-head logo, may have trouble raising its athletic profile if other colleges won’t play against it.

The NCAA may allow an exception to the ban if an Indian tribe agrees to let a college team use its name, and the association worked out a deal with UND under which it could keep its name and logo if two Sioux tribes agreed. On April 21, the Spirit Lake Sioux voted 764 to 371 to let UND use the nickname and logo, so now the decision rests with the Standing Rock Sioux. Standing Rock tribal leaders oppose the nickname. The tribe as a whole may be more receptive but its leaders have refused to schedule a vote. [James MacPherson, UND’s Fighting Sioux Nickname Gets 1 Tribe’s OK, AP, April 22, 2009.]

Ugandan President Yoweri Museveni says Africa needs its own space program to keep tabs on other nations. “The Americans have gone to the moon. And the Russians. The Chinese and Indians will go there soon. Africans are the only ones who are stuck here. We must also go there and say: ‘What are you people doing up here?’”

Mr. Museveni believes an African moonshot will bring African nations closer together. “Uganda alone cannot go to the moon. We are too small. But East Africa united can. That is what East African integration is all about. Then we can say to the Americans: ‘What are you doing here all alone?’” [Africans Must Travel to the Moon: Uganda President, AFP, May 3, 2009.]

View all posts by AR News