Nation-states became essentially large apartment complexes. Consumers payed taxes so they could participate in an economy. They could “shop” for whatever nation-state offered the best economic opportunities. Nationality became something you could choose for individual advantage.

After World War II, Western elites decided that multi-racial democracy was the only acceptable system. White racial identity was a threat. White identity means people see themselves as something more than consumers. With few exceptions, Western political leaders don’t talk about protecting an ethnic group or a national population. They talk about promoting democracy and equality.

The Soviet Union’s collapse meant Westerners no longer had a prominent example of the dangers of utopian egalitarianism. Thus, Francis Fukuyama could write in 1992’s The End of History and the Last Man:

What is emerging victorious, in other words, is not so much liberal practice, as the liberal idea. That is to say, for a very large part of the world, there is now no ideology with pretensions to universality that is in a position to challenge liberal democracy, and no universal principle of legitimacy other than the sovereignty of the people.1 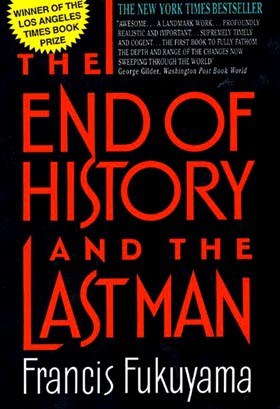 Individual liberation requires eliminating inequality’s root causes, including racial prejudice and racial consciousness. Governments enforce “civil rights” in order to protect individuals from natural inequality. Furthermore, if the “liberal idea” is the final stage of mankind’s political evolution, those who oppose it are ignorant and bigoted. Thus, violence and repression against white advocates would not violate individual rights. They are tactics necessary to protect them. Humanity will live in peace and equality if “racism” is eliminated.

Whatever liberals may believe, equality is an illusion. Many studies have found that stereotypes are essentially correct because groups are different. However, contrary the claims of many liberals, people set aside stereotypes in the face of contrary evidence. They quickly adjust their assumptions if a black woman turns out to be good at math. However, there are group differences on average, and “racists” notice them. Our country has radically changed since the 1965 Hart-Celler Act opened the gates to mass non-white immigration. The consequences include increasing loneliness and alienation,3 wage stagnation,4 and more crime.5 A society meant to defend individual rights is making us lonely and miserable.

Starting in the early 1990s, I began writing that diversity itself is the problem, because it fragments social unity. Societies thrive when there is a cultural consensus on behavior, values, aesthetics, ideals, and faith. These “truths” are sometimes arbitrary, but they are still valuable.

Samuel P. Huntington said something similar in his 1996 The Clash of Civilizations and the Remaking of World Order: that humanity would break into “civilizations” based on religion, ethnicity, and culture.

The failure of trade and communications to produce peace or common feeling is consonant with the findings of social science. In social psychology, distinctiveness theory holds that people define themselves by what makes them different from others in a particular context: “one perceives oneself in terms of characteristics that distinguish oneself from other humans, especially from people in one’s social milieu . . . a woman psychologist in the company of a dozen women who work at other occupations thinks of herself as a psychologist; when with a dozen male psychologists, she thinks of herself as a woman. People define their identity by what they are not. As increased communications, trade, and travel multiply the interactions among civilizations, people increasingly accord greater relevance to their civilizational identity . . . . From sociology, globalization theory produces a similar conclusion: “in an increasingly globalized world — characterized by historically exceptional degrees of civilizational, societal and other modes of interdependence and widespread consciousness thereof — there is an exacerbation of civilizational, societal and ethnic self-consciousness.” 6

Mr. Fukuyama seemed wistful and somewhat despondent about his conclusions but he didn’t see an alternative. Samuel Huntington did. The quest for a single system will fail. Humanity will fragment into different civilizations with different “truths.” If a state includes different civilizations within itself they will compete for power and the state will become unstable. Conflict within a society creates widespread distrust.

As Robert Putnam of Harvard explains:

New evidence from the US suggests that in ethnically diverse neighbourhoods residents of all races tend to “hunker down.” Trust (even of one’s own race) is lower, altruism and community cooperation rarer, friends fewer. In the long run, however, successful immigrant societies have overcome such fragmentation by creating new, cross-cutting forms of social solidarity and more encompassing identities. Illustrations of becoming comfortable with diversity are drawn from the US military, religious institutions, and earlier waves of American immigration.7

Countless American politicians and celebrities say that “diversity is our strength.” This is a profession of faith to our state religion. Diversity is a weakness. No matter what races are involved, diversity makes societies fall apart, as I have written before:

Each of us is a history of traits, including mental traits, shaped by our culture. In any given culture, those whose inherent tendencies match the values of that culture succeed; those who don’t match are less likely to breed successfully. Over time, this produces a shared cultural values system, which in turn produces philosophical and political consensus, and this is the basis of every great civilization that has ever existed (although most are in decline at this time, and race-mixing is one symptom of this decline). Without consensus, there is no agreement to move upward and become better, so civilizations decline by settling on a pale imitation of that, such as “Social Darwinism” by which we decide those who earn the most money — not those who do the best job at a given task, but those who make the most money from their task, regardless of how well it is done — are the most valued in that society.

I prefer a society of my own kind, with shared ethno-cultural values, and I don’t view that as insulting to African-Americans or any other ethnic group; in fact it’s the opposite: the highest respect I can grant to any group is to insist that they be separate and be allowed to do things their own way, since otherwise is to presume that my way is better, and thus to impose it upon them as an “improvement” over what they are.8

Even culture is partially genetic. As Jonathan Haidt says:

All human beings today are the products of the co-evolution of a set of genes (which is almost identical across cultures) and a set of cultural elements (which is diverse across cultures, but still constrained by the capacities and predispositions of the human mind). For example, the genetic evolution of the emotion of disgust made it possible (but not inevitable) for cultures to develop caste systems based on occupation and strongly supported by disgust toward those who perform “polluting” activities. A caste system then restricts marriage to within-caste pairings, which in turn alters the course of genetic evolution. After a thousand years of inbreeding within castes, castes will diverge slightly on a few genetic traits — for example, shades of skin color — which might in turn lead to growing cultural association of caste with color rather than with occupation. (It only takes twenty generations of selective breeding to create large differences of appearance and behavior in other mammals.) In this way, genes and cultures co-evolve; they mutually affect each other, and neither process can be studied in isolation for human beings.9

The results show that ethnic diversity in the micro-context affects trust negatively, while the effect vanishes in larger contextual units. This supports the conjecture that interethnic exposure underlies the negative relationship between ethnic diversity in residential contexts and social trust.11

An Israeli study found that diversity destroys loyalty and trust throughout society:

Libertarian Eric S. Raymond writes about the costs of living in low-trust societies:

One of the intangible assets I benefit from as an American . . . is that in my society, I can usually make handshake deals with strangers and expect them to be honored. I live in a context of what people who study this sort of thing call “high social trust.” (In part because I avoid the places in the U.S. where social trust levels are low.)

This is more important than anyone who has never lived outside a high-trust society really understands. In low-trust societies, you can’t count on anyone outside your family or tribe not to betray an agreement for short-term advantage. Large-scale cooperation is difficult. Rates of crime and violence are high, the law is unreliable, and at the extreme, blood feuds are a common way of pursuing disputes.14

Social trust is a resource, and high-trust societies are more pleasant and productive than low-trust societies. Healthy societies recognize and reward good people and good acts; failing societies are “every man for himself.” In the Third World, institutions tend to fail and there is crime, corruption, and low productivity. If trust is a resource, high-trust societies have a lot to lose from diversity. We should see trust as a “commons,” a shared resource that increases the value of our civilization. Unfortunately, this resource is subject to Garrett Hardin’s “tragedy of the commons:” If something is freely available to all — but in limited quantities — people will exploit it until it is used up or badly degraded. Ocean fisheries and virgin forests seemed inexhaustible, but could not survive unregulated exploitation. Even the atmosphere will be destroyed unless people are constrained.

Civilization is the commons. If each person acts for his own advantage without regard to what that civilization needs, he will tear it apart. Society needs unity. Though slogans about diversity emphasize solidarity and cooperation, a diverse society is an atomized society. There are few reliable shared institutions, and each group looks after its own interests at the expense of other groups.

Mainstream conservatives think they can impose a common culture on diverse peoples. They think they can teach “Americanism.” So far, it’s not working. A non-racial “Western Civilization” can’t be imposed on other peoples. How many nations have adopted the Western style of government and law? Could you live under their legal systems or trust their institutions. One need look only at South Africa, Mexico, or Pakistan to see that non-white populations seldom share our cultural assumptions about how institutions should function. A constitution, even the Constitution, can’t replace folkways and traditions.

Modern American populism reflects an implicit awareness that diversity is failing. A plurality of Republican voters say immigration is the most important political issue. While there is no explicit white consciousness, there’s an implicit acknowledgement that society needs an ethnic core. Research shows many Republicans don’t like hearing foreign languages in public.

To counter the rising tide of diversity, nationalists have championed ethnic self-determination or the ability for every group to choose its own future. Nationalism means that the nation’s ethnic core gets precedence. Germany for Germans, Japan for Japanese, and Israel for Jews. Multi-racial, multi-ethnic, liberal democracies are just as outmoded as the diverse empires of the 19th century.

South America suggests that when Europeans mix with different populations the result is lower capabilities. It’s more than just losing blonde hair and blue eyes. Admixture creates a new group, and breaks up the framework of evolution that gave each original group its unique traits.

Diverse societies merge into a raceless mass, losing the specific traits of each group. Groups also compete for power, and in the worst cases this can lead to genocide.

There is an alternative, what I call benevolent xenophobia. Instead of pursuing “equality,” we should recognize that different groups are happier apart. There is no reason why government cannot encourage voluntary separation instead of promoting involuntary integration. We could offer reparations-with-repatriation; new-comers could accept lump sum payments to go home. They would enrich their homelands and we would be able to heal history’s wounds and part in friendship.

Brett Stevens is an IT professional who writes about nationalism and conservation at his blog, Amerika.org
< Going to a Black School Made Me Proud to Be White
The Late Great United States >
Blog
Commentary
Videos
Podcasts
Follow us