Over the past few weeks, major media outlets have attacked the “QAnon” movement. Some journalists called for it to be suppressed, calling it dangerous and potentially violent. This is just a sampling:

Twitter has removed thousands of QAnon posts. Facebook is banning QAnon groups. TikTok and YouTube are trying to squash it, too. Google is blocking searches for it because it is a “terror threat.”

In addition, we will:

What is QAnon? This question is harder to answer than you might think. There are several books about QAnon, including QAnon and The Great Awakening by Michael Knight, QAnon: An Invitation to The Great Awakening by “WWG1WGA,” and Revolution Q by “Neon Revolt.” After reading these and other books and websites, I’d identify three main points.

The initial post that spawned “Q” could have been made by anyone. Further “drops” by “Q” or people in the movement could also be made by anyone. There is no way to verify any of their claims, except through vague references to key phrases that will supposedly be uttered in the days following the posts. For example, before President’s rally in Tulsa, Eric Trump posted an American-flag QAnon meme with the #WWG1WGA (this is supposed to stand for “Where We Go One, We Go All”) at the bottom to Instagram. Does this mean anything, or was Eric Trump simply passing along an image he liked? QAnon is so popular it has spawned its own “watchdog” groups. NPR’s Michael Martin interviewed Travis View, the co-host of the QAnon Anonymous podcast. Mr. Martin prepped the audience by calling QAnon “a group of people who adhere to some far-right conspiracies and believe a number of absurd things.” Mr. View obliged by saying that according to QAnon, “The world is controlled by a Satanic cabal of pedophiles that they believe control everything like the media, politics and entertainment.” He adds that QAnon also thinks President Trump knows all about this and will “defeat this global cabal once and for all and free all of us.” “QAnon Anonymous” host Travis View added that it is a “domestic extremist movement” and said President Trump had “tweeted or retweeted QAnon accounts over 160 times.” However, he also admitted “no one in the current administration has ever done anything to endorse QAnon.”

Nevertheless, it seems that at least some of President Trump’s advisors know about the movement and are playing to it. President Trump has directly retweeted memes from accounts linked to QAnon. Republican congressional candidate Angela Stanton-King tweeted, “THE STORM IS HERE.” Tess Owen, Vice’s reporter on the “far right” beat, wrote, “Welp, the GOP Now Has 15 QAnon-Linked Candidates on the November Ballot.”

THE STORM IS HERE 🇺🇸

NBC news says, “There is no evidence to these claims” about a “cabal of criminals run by politicians like Hillary Clinton and the Hollywood elite.” However, after Jeffrey Epstein’s alleged “suicide” and news that powerful figures such as former President Bill Clinton and Prince Andrew were part of Epstein’s strange network, it’s hardly absurd to claim there could be sick stuff going on among the political and cultural elite.

Jimmy Saville was a well-known British media personality, knighted, and honored by many institutions including the Vatican and the Sovereign Military Order of Malta. After his death, it emerged that he had sexually abused children; some suggested hundreds of them. Most honors were rescinded posthumously.

A jury recently convicted Harvey Weinstein, once the most powerful producer in Hollywood, of sexual crimes. Several actresses including Allison Mack were alleged to be part of a bizarre sexual cult called NXIVM, and she pleaded guilty to racketeering. During the 2016 election, Wikileaks released email tying John Podesta’s brother to “artist” Marina Abramovic and her bizarre, occult performance piece “Spirit Cooking.” If a crazy man approached you in the street raving about these plots, you’d run, but these things happened. Non-whites sexually abused thousands of young women in Rotherham, England. Police and local government officials did nothing because they didn’t want to be called racists. This is a sick world, and evildoers often get away with evil. It’s not absurd to think powerful men and women are no better than middling Labour politicians who looked the other way instead of stopping rape and sex slavery.

Is there a “Deep State” opposing President Trump? In 2019, the New York Times ran an editorial called “The ‘Deep State’ Exists to Battle People Like Trump.” In 2018, an anonymous official wrote, “I Am Part of the Resistance Inside the Trump Administration.” Recent evidence suggests that the FBI bullied General Michael Flynn, President Trump’s former national security advisor, and made him confess he had lied to agents after they threatened his son. The Department of Justice recently concluded that the interview of General Flynn was not “conducted with a legitimate investigative basis.”

This doesn’t mean there’s a Satanic cabal running the government. It does mean some bureaucrats opposed or even sabotaged President Trump’s agenda. They investigated his subordinates or leaked information to the press. If we substitute “the permanent bureaucracy” for the more ominous sounding term “Deep State,” this “conspiracy theory” becomes plausible. Incidentally, General Flynn recently posted a video that uses QAnon slogans.

What is truly implausible about QAnon is the idea that President Trump knows about everything and will destroy this vast conspiracy. The proof for such assertions lies in gestures, vague statements, or even the background of where he is speaking. For example, in QAnon and the Great Awakening, the author says that President Trump’s phrases “this is the calm before the storm” and “tippy top,” his supposed circular motions with his hands, and occasional pointing towards supposed Q supporters are proof that he is on to it. “Q offers hundreds of data points that demonstrate Q is indeed linked to the Trump Administration,” the book says. If you desperately want to believe something, you’ll find evidence for it. This is confirmation bias at best, schizophrenia at worst. If President Trump truly is about to reveal a vast Satanic conspiracy, he’s taking his time.

What is especially dangerous about QAnon is not that it promotes dangerous extremism, but that it urges complacency. Its core message is that Donald Trump knows all about the secret conspiracy running the world and has the power to crush it; after all, he’s President. All we have to do is wait. “Nothing can stop what is coming,” says one popular slogan. If this were true, President Trump and his followers have already won, and there’s no reason to do anything but scour the internet for clues about what’s coming next.

After almost four years of Trump’s presidency, QAnon is an attempt to explain the President’s failure to “Make America Great Again.” It’s true that he’s hobbled by powerful elites. However, President Trump’s biggest personnel problems, from John Bolton to Anthony Scaramucci, were people he appointed himself. No one forced him to make Reince Priebus his chief of staff, expel Steve Bannon, or pick a fight with Attorney General Jeff Sessions. Indeed, according to QAnon, Attorney General Sessions was the one who was supposed to rout the evildoers.

QAnon assures Trump supporters that he has everything well in hand and that justice is coming. It’s far more terrifying to realize that he doesn’t. He is politically isolated, surrounded by foes, and losing the presidential campaign to a confused and combative man who occasionally forgets what office he’s running for or where he is. President Trump’s not mustering his legions. Instead, his own defense secretary publicly opposed his plans to use soldiers to suppress riots. The brass overruled his wishes to leave bases named after Confederate heroes alone. Unless President Trump has a Praetorian Guard we don’t know about (perhaps the Space Force?), there’s nothing he can use against domestic opponents.

The real question is why reporters fear QAnon. Some of its supporters have allegedly committed crimes. One alleged QAnon believer killed a Gambino mob boss. In February, another blocked a bridge with an armored vehicle. Two others had family troubles, which may or may not be related to their QAnon beliefs. If these people did those things, they are criminals, but this is hardly a wave of violence. All together, this would be a peaceful weekend in Chicago.

QAnon isn’t dangerous. Conspiracy theories are as old as the Anti-Masonic Party, maybe older. Some unstable people may latch on to them, but they are not notably violent. If anything, if they really believe a Satanic cabal runs the world, they are showing remarkable restraint.

I suspect the real reason journalists don’t like QAnon is because at its core, it tells people the media are lying. It encourages independent investigation and citizen journalism. This occasionally leads to absurdities, such as building a worldview around 4chan posts. However, it’s healthy to distrust elites. Sometimes, journalists lie, stretch the truth, or hide it entirely. Sometimes, they demand citizens be silenced. Ordinary Americans looking for truth are a threat. I believe mainstream journalists truly regard themselves as a Fourth Estate, an independent political power. They think they have the right to determine what Americans should and should not be allowed to hear or say. Their efforts to censor and suppress QAnon only fuel the movement.

Journalists promote a conspiracy far more dangerous and deadly than QAnon. That is the “white privilege” conspiracy theory. Many journalists and academics tell non-whites that racist whites hold them down. This implicitly justifies protests, shakedowns, and even anti-white violence. When George Floyd died, Americans weren’t allowed to see the bodycam videos. Instead, many journalists told a fable about a white policeman murdering an innocent black man. This was the spark, but journalists had soaked the country in gasoline years before with endless sensationalist coverage of race and “racism.” Now, riots are destroying cities, ruining businesses, probably spreading disease, and creating a huge crime wave. I blame journalists for inciting this violence. It’s not QAnon spreading a violent conspiracy theory, but journalists at CNN, the New York Times, the Washington Post, and others who manufactured a fake crisis.

Liberals are right to think QAnon is dangerous, but not in the way they think. QAnon is dangerous to whites. It tells them that everything is under control, that an evil conspiracy will be exposed, and that we just need to trust President Trump. We can’t be under any illusions that President Trump will save us. “The Storm” is not coming, the cavalry won’t ride over the hill, and there isn’t a secret military force ready to scoop up our foes and liberate America. It’s up to us. 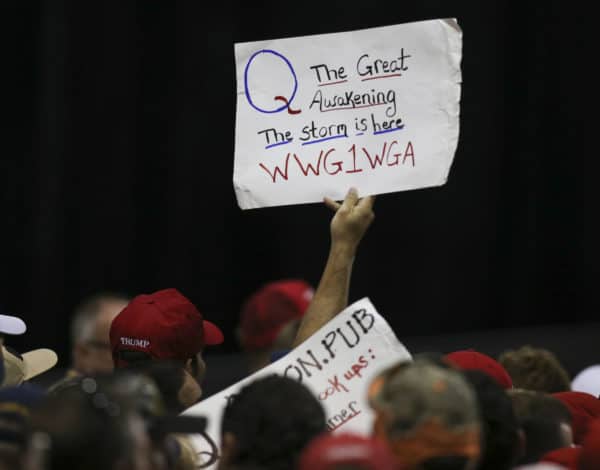 Liberals should be thankful for a conspiracy theory that urges complacency. Our message is more urgent: Our people, country, and civilization are at stake. You don’t need to pore through websites to see what’s happening; just walk down any city street. Time is running out. You have a duty to resist. Don’t look for a savior. Instead, join us, and be worthy of our ancestors.

Mr. Hood is a staff writer for American Renaissance. He has been active in conservative groups in the US. You can follow him on Gab.
< Justice Department Finds Yale Illegally Discriminates Against Asians and Whites in Undergraduate Admissions in Violation of Federal Civil-Rights Laws
South Africa: Farm Attacks and Murders Are Undeniably Spiking – Saps Data >
Blog
Commentary
Videos
Podcasts
Follow us