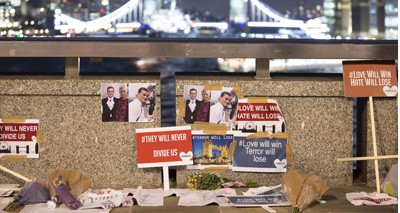 There is a brutal passage in Ayn Rand’s Atlas Shrugged. A train is about to enter a tunnel. Rand describes the passengers, dissecting their beliefs and the ways they led to a disastrous political situation. When an accident kills all the passengers, Rand implies they had it coming.

A Muslim terrorist killed two people last Friday in London. One was Jack Merritt, a “course coordinator for Learning Together, a prisoners rehabilitation program.” His murderer had taken the course. Mr. Merritt’s Twitter account is still up. He promoted diversity, refugees, and support for the Labour Party in the upcoming election. He also opposed “repressing working class communities” to stop knife violence.

Did you see what I done? How J Hus became the voice of young black Britain https://t.co/0KnyZmvrIp

‘It’s not the refugee outflows that cause terrorism, it is terrorism, tyranny, and war that create refugees.’ https://t.co/HnE18wqbPr

“While there are no alternatives in parliament to reducing youth violence without repressing working class communities, they do exist and require building a social movement led by communities directly affected to win them.”https://t.co/dF01CaoyNU

The murderer, Usman Khan, could participate in Mr. Merritt’s program because he was released early. The Labour Party and Conservatives are blaming each other about why. Conservatives blame early release, but Labour leader Jeremy Corbyn wanted to know if Khan was given a proper “deradicalization program.” (The British government forced a man who fought off a terrorist attack in 2017 to undergo “deradicalization” because it thought he might become anti-Islam.)

Jeremy Corbyn also tweeted a video ending with the grim slogan “Our Diversity Is Our Greatest Strength.”

This is our strength. pic.twitter.com/nabBzTK0AB

Security services were already monitoring Khan. It would have been easier to keep him in prison than try to teach him the virtues of multicultural secular democracy.

Mr. Merritt would have opposed this, at least according to his father. David Merritt called his late son a “beautiful spirit” who “always took the side of the underdog.” He added that Jack Merritt “would not wish his death to be used as the pretext for more draconian sentences or for detaining people unnecessarily.” He shares his late son’s views.

Going to see my son In Bristol at the weekend; he LOVES its diversity, like most young people do. He’s the future; racist Angry Wanks is the past. https://t.co/amAak7ZM6o

Unlike Rand, I’m not going to imply Jack Merritt had it coming. His father’s grief must be immense. Yet he is waging an online political battle immediately after his son’s death at the hands of a Muslim.

We’ve seen this before. University of Iowa student Mollie Tibbetts disappeared in 2018. After police arrested an illegal immigrant, her father rather bizarrely defended Hispanics. “As far as I’m concerned,” he said, “they’re Iowans with better food.” He also attacked politicians who call for stricter border control, saying Mollie would have called their views “profoundly racist.” Her mother let an illegal immigrant who was related to the alleged killer stay in her home.

Kevin Sutherland was killed, apparently at random, by a black man on the Washington D.C. Metro on Independence Day 2015. He was stabbed repeatedly; no one tried to help.

The late Sutherland worked in liberal politics and had been an intern for Congressman Jim Himes. Sutherland’s Twitter feed was filled with attacks on the Confederate flag, Christianity, and conservatives. Then presidential candidate Chris Christie blamed “liberal policies” for the murder. Congressman Himes condemned him, accusing Governor Christie of “fearmongering and thinly veiled racism.”

In 2015, two black men raped a pregnant woman named Amanda Blackburn and shot her in the back of the head. Her preacher husband Davey Blackburn said he “forgave” the killers and hoped he could “get the opportunity to share the Gospel with these guys.” He also said, “Jesus takes what the world says is a tragedy and makes it beautiful.”

That same year, Islamic militants killed 129 people in Paris. In a video the New York Times called “moving,” the husband of one of the victims said he didn’t hate the killers. “I will not give you the gift of hate,” he said. “Even though it is what you were hoping for, responding to hatred with anger would be to fall to the same ignorance that made you the people you are.”

There’s also Amy Biehl, a young Fulbright scholar who traveled to South Africa to register blacks in the first all-race election in 1994. She was murdered by a black mob, despite her pleas that she was a “comrade.” Her parents showily forgave the killers, who were released without punishment because the Truth and Reconciliation Commission determined the murder was “political.” Indeed, her parents took the opportunity to honor those who “lost their lives in the struggle.” They gave jobs to two of the murderers. How can we explain this? I believe it’s something beyond pathological altruism. It’s religious. At a Houston church, presidential candidate Marianne Williamson told all the whites in the congregation to hold hands with a black person and say “I apologize” for slavery, lynching, police brutality, etc.

This religion combines fear with a moral vision.

The fear comes from knowing that media or the state will attack anyone who speaks out against non-white aggression, even the most vicious cases. For example, in 2015, Judge Olu Stevens admonished white victims of an armed robbery by blacks for not doing enough to fight “stereotypes.” He was offended that a five-year-old girl traumatized by the robbery said she was afraid of black men. He sentenced one offender to nothing more than probation.

Modern South Africa is dangerous for whites. When whites protested farm attacks in 2017, media complained because Afrikaners used the old South African flag. Whites live peaceably by themselves in the small town of Orania, yet international media regularly write hit pieces against it. Journalists are not horrified by all-black towns; they are not newsworthy.

Fear is central to religion. When Christians “fear God,” it does not mean they think He is tyrannical, but it’s an acknowledgement of His power.

Yet fear fuses with belief in mysterious ways. If people fear something, they seem to believe its power is somehow justified. George Orwell wrote about this in 1984. Winston Smith, despite his loathing of the regime, joins in the Two Minutes Hate. “[H]is secret loathing of Big Brother turned into adoration,” he wrote, and “Big Brother seemed to tower up, an invincible, fearless protector.”

We see this when allegiances radically shift in response to political change. People believe they have sincerely changed their minds.

The religion’s moral vision is egalitarianism — the ideal that everyone can be equal and free in a just society. This is a fantasy. People are not equal, politics is always about pursuing power, and without divine intervention, there can never be a “final” state of social organization in which every problem is solved.

A faith cannot be fought with reason. A moral vision must be replaced with a competing moral vision. It is never enough for white advocates simply to say that we are defending our interests or to show charts about racial realities. Jared Taylor writes that whites are partially defined by “an abiding sense of reciprocity, a conviction that others have rights that must be respected.” Thus, we must ground our movement in white identity’s fundamental moral legitimacy.

At the same time, we must reduce the fear. Fear cripples many of our people. We can take away this fear by supporting activists financially. More people can then defend our views publicly.

When “doxing” loses its economic and social sting, things will change very quickly. The movement has already come incredibly far in the past few years, which is why our opponents have resorted to censorship and force.

If even half our readers sent in ten dollars a month, let alone 10 percent of their income, I have absolute faith we’d triumph — and quickly.

We live under a false creed. When parents can’t express anger at the death of their children and even turn them into martyrs for multiculturalism, we need a Reformation.

With solidarity and courage, we can win. We can overcome this sick secular theocracy that sets the false ideal of “equality” over the lives of our children.

Mr. Hood is a staff writer for American Renaissance. He has been active in conservative groups in the US. You can follow him on Gab.
< Two North Carolina Towns Cancel Christmas Parades After Plan to Fly Confederate Flag Sparks Protests
Hate Crime Hoax: Nathan Stang Vandalized His Indiana Church with ‘Heil Trump’ >
Blog
Commentary
Videos
Podcasts
Follow us