One ruling class replacing another is revolution. One people replacing another is conquest. Usually, revolution or conquest creates a new state. Yet sometimes the state survives the destruction of its core population. I would call this “state conquest.” It happened in South Africa in 1994 and it could happen in the United States.

In 1994, the rainbow nation’s banner replaced the old South African flag. Public safety, infrastructure, and bureaucratic competence declined. South Africa is now holding hearings on “state capture” — a different term that means corruption on such a huge scale that private interests set government policies that benefit themselves. Yet what is happening in South Africa is more than state capture.

A nation is an “ethno-cultural community” that is the expression of a certain people. In my conception, state conquest occurs when this expression is no longer that of the original people but one that serves the interests of a different people. It’s a hijacking.

This isn’t simply “revolution within the form,” which is what happens when massive changes in government take place within old structures. State conquest is deeper. Augustus killed the Roman Republic, but the republic was still Roman. Oliver Cromwell’s Commonwealth was still England. The Ancién Regime, the First Republic, and Napoleon’s Empire were all still France.

Enoch Powell recognized this principle when he said to a stupefied Margaret Thatcher that he’d fight for England even if England went Communist. Similarly, George Orwell wrote in “England, Your England” that there would be radical change after World War II, but that “England will still be England, an everlasting animal stretching into the future and the past, and, like all living things, having the power to change out of recognition and yet remain the same.” Such people understood national identity better than a modern “conservative” who thinks his country is a marketplace.

After state conquest, a nation is no longer Orwell’s “everlasting animal,” but a new organism. South Africa became a different country after 1994. The new South Africa is founded on opposition to the prior state and the whites who created it. A South African patriot before 1994 is a traitor to today’s South Africa, and vice versa.

The initial transition between old and new South Africa was slow. The new South African government did not confiscate the land of political opponents or imprison them. Whites were supposed to have a place in the new system. Nelson Mandela famously visited Hendrik Verwoerd’s widow in Orania in a gesture of reconciliation, tacitly accepting the existence of the Afrikaner community. However, the regime is moving away from reconciliation and reducing whites to a helot class within what used to be their country.

Dispossession takes several forms. First, the South African government is stripping whites of the means to defend themselves. In 2003, the South African government banned the “commando” mobile defense teams that protected rural whites. Farm murders are now on the rise again. South Africa has extremely strict gun control, but crime is still high. Officials are reportedly considering legislation that would eliminate even “self-defense” or “protection of property” as reasons to own a firearm.

South African police have been accused of complicity in some farm murders. When Julius Malema, the head of Economic Freedom Fighters (EFF) was asked if he helped organize these killings, he replied, “Maybe, maybe not.”

Secondly, whites are impoverished in the name of “equality.” The Black Economic Empowerment (BEE) program is a massive affirmative action system in a majority-black country. Politicians and journalists almost always blame persistent black poverty the “legacy of apartheid.” South Africa’s leaders then use inequality to justify such measures as seizing white farmland despite prior constitutional safeguards. Policymakers are also discussing a new wealth tax.

Third, there is the ideological war against the prior regime and white history. This includes changing the flag, renaming cities and streets, and destroying monuments. The EFF wants to rename South Africa itself because the name has “colonial connotations.” This third element is the most important part of state conquest because it defines whites as enemies and justifies plundering them.

Here is an example. Recently whites blocked roads to protest farm murders. Some waved the old South African flag. South African politicians ignored the problem of farm killings and screamed about the flag. Arts and Culture Minister Nathi Mthethwa “strongly condemn[ed] the racism on display.” Journalists wrote many articles on the topic, with some commentators calling for flag wavers to be jailed. This could happen. The Nelson Mandela Foundation is suing to make it illegal to display the old South African flag, which it says is a symbol of a “crime against humanity.” Blacks’ feelings deserve state protection. Meanwhile, white protests against widespread murder are dismissed as a “launch pad for a new movement that gives legitimacy to apartheid nostalgia and racist sentiment.” South African whites gave up sovereignty, identity, and political power but are still said to have “white privilege.”

That “privilege” is under constant assault. In 2015, the University of Cape Town removed Cecil Rhodes’s statue at the University of Cape Town. This was the beginning of a drive to “decolonize” the curriculum by replacing whites with non-whites. The EFF dominates campus politics and is nearing a breakthrough in national politics. According to recent comments by its secretary-general, the governing ANC no longer feels it needs white voters. In a long article in Harper’s, James Pogue writes that the “true reality of confronting white supremacy that I’d learned in South Africa” means “white people giving things up.” (Italics in original). Ultimately, whites will be forced to give up everything.

The same process of state conquest is underway in the United States. Several progressive activists have challenged gun rights on racial grounds. Damon Young wrote an article with the headline, “America Doesn’t Have a Gun Control Problem, We Have a White-People Problem.” Michael Moore’s Bowling for Columbine linked gun rights to white supremacy. Scientific American published a story in 2008 claiming white men were stockpiling guns because of “racial anxiety.” Academic publisher PLOS One posted an article concluding that “symbolic racism was related to having a gun in the home and opposition to gun control policies in US whites.” Journalists link firearms ownership to “scared white males” so often it’s a trope. Paul Kersey is right — when whites cease to be the majority, gun rights will be abolished, regardless of the Constitution.

The second vector of state conquest is also underway. Affirmative action plunders whites. In 2003, Justice Sandra Day O’Connor wrote, “We expect that 25 years from now, the use of racial preferences will no longer be necessary.” Yet there won’t be racial “equality” in 2028 because racial equality is not possible. Instead, even more groups will claim to be oppressed. By 2028, affirmative action will have grown.

Today, race hustlers accuse institutions from the Academy Awards to fire departments of being “too white.” The persistence of racial gaps in wealth or education justify ever more handouts to non-whites. Progressives are already discussing ways to eliminate the “racial wealth gap” via wealth taxes and reparations. These efforts will not eliminate the “racial wealth gap,” just as redistributive policies failed in South Africa. Thus, even more ambitious programs will be needed.

The final and most important vector of state conquest also advances every day. Activists, scholars, and journalists are redefining American history into a story about overcoming “white supremacy.” Cities around the country no longer celebrate Columbus Day but “Indigenous Peoples’ Day.” Some schools teach that Thanksgiving is a “Day of Mourning.” Instead of historical markers commemorating a battle or settlement, localities memorialize lynchings. 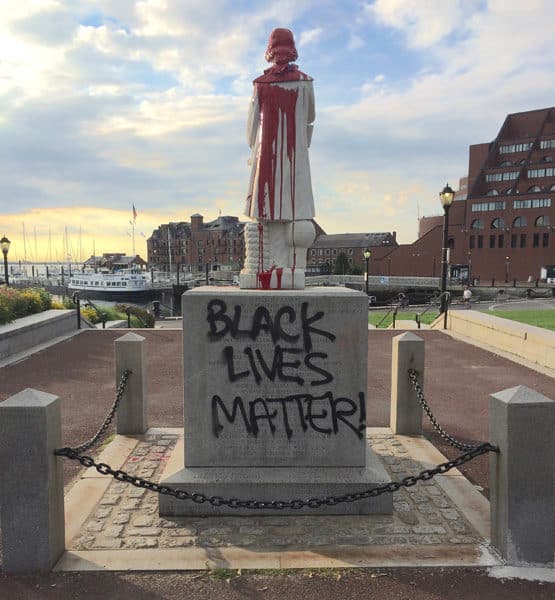 Statues to American presidents, including Union soldiers such as William McKinley, are removed to avoid offending non-whites. Efforts to “decolonize” college campuses, similar to those in South Africa, are sweeping American universities. Protests against the national anthem and the pledge of allegiance, usually inspired by racial grievances, are so common they are barely newsworthy.

In Pat Buchanan’s The Death of the West, he tells “The Old History” of the United States familiar to older Americans. (p.152) It was the history of the Europeans who discovered the New World, the Revolution, the tragedy of the Civil War, the conquest of the West, and the rise to superpower status. The story taught today is one of “Native American” genocide, slaveowners building a country on white supremacy, the “theft” of the Southwest from Mexico, and the creation of a racist empire that oppresses the world. Congresswoman Alexandria Ocasio-Cortez draws on this story when she says Hispanics are “descendants of native people” with more rights to America than whites.

In a moral world, whites would have never come to North America. Thus, the United States should never have been established. It’s not surprising vandals destroy monuments to the national anthem and some students at George Washington University want the school’s name changed.

Revisionist history is mainstream, but not yet dominant. However, conservatives who dismiss “political correctness” are naive. The tipping point of state conquest has nearly arrived in the South.

Both Republicans and Democratic politicians campaign against Confederate symbols and call each other “racists.” Streets are being renamed and there are campaigns to rename cities. Stacey Abrams, who began her career by burning a Georgia flag and wants Stone Mountain sand blasted, came close to becoming Georgia’s governor. She could be Joe Biden’s vice-presidential running mate.

The destruction won’t stop with Confederates. Sam Francis argued that establishing the Martin Luther King holiday meant that America no longer understood itself to be a white country. Reparations would be the next step. It would codify state conquest by non-whites. The flag, references to the Constitution, and some institutions might endure — at least for a while. However, the country is being symbolically “refounded,” this time in opposition to its own past and previous white identity.

This is what Paul Kersey calls “black-run America.” It doesn’t mean that America is literally run by black people (except certain major cities such as Jackson, Mississippi or East St. Louis, Illinois). It means the state serves the interests of blacks and non-whites generally, instead of whites. After state conquest, non-whites become the moral center of American policy, history and identity.

Under such a system, American Indians or African slaves become more “American” than the Founding Fathers, who were racist oppressors with no claim on this country anyway. This version of history is already taught at many colleges. Patriotism for the old regime and respect for its symbols and heroes is treason to the new America. Already, many journalists and politicians want “white nationalists” treated like potential terrorists.

The tipping point is closer than conservatives imagine. President Trump could have defended the historic American nation. Instead, he emboldened its enemies, who are attacking the old America on racial grounds. South Africa is a glimpse of the American future after state conquest. American patriots are in a desperate battle to prevent this overthrow, but victory isn’t guaranteed. If America can’t be saved, white Americans face the difficult task of cutting ourselves away from a regime that is increasingly committed to our displacement. If we fail, the price isn’t defeat — it’s oblivion.

Mr. Hood is a staff writer for American Renaissance. He has been active in conservative groups in the US. You can follow him on: Gab.
< Are Arabs and Iranians White? Census Says Yes, But Many Disagree
Gardai Will Allow Hijabs And Turbans to Be Worn As Part of Their Uniform in a Bid To Increase Diversity >
Blog
Commentary
Videos
Podcasts
Follow us