In John Milius’ 1984 classic movie Red Dawn, which probably got him blacklisted from Hollywood, a pivotal scene illustrates the current political situation. Soviet invaders are sneaking across the southern border with the help of Hispanic Communists disguised as illegal immigrants. After a bucolic, almost entirely white town is invaded and devastated by the Communists, there is a shot of a bumper sticker on a truck reading, “They can have my gun when they pry it from my cold dead fingers.” The white hand of a dead American is framed in the shot, clutching a pistol. One of the Communists calmly reaches down, takes the weapon, and moves on.

Mr. Milius was a longtime board member of the National Rifle Association and this message was no accident. The NRA has thus far avoided becoming yet another failed, ineffective, far-right conspiratorial group and is instead one of the groups most effective at mobilizing voters nationwide. Yet while many Americans think only a uniformed military force could disarm them, they are blind to how a surreptitious army is poised to help their own government disarm them. As Gregory Hood noted, Democrats and the mainstream media are waging a dramatic war on the NRA, and in the long run, they are likely to win through sheer demographics unless European-Americans do something about it.

Indeed, in states such as California, New York, New Jersey, Maryland, Massachusetts and Red Dawn’s Colorado, they have already won victories by banning high-capacity magazines and certain firearms. Senator Dianne Feinstein gleefully rubbed her hands together when President Donald Trump foolishly mentioned restrictions on the Second Amendment. She wants the rest of the country to adopt restrictions like those already passed in states that have gone brown.

The Left recognizes this explicitly. In the aftermath of the Florida shooting, Joy Reid penned a racially triumphalist article bragging about the end of the NRA and the Second Amendment: “If Wayne LaPierre doesn’t understand that the next generation and the next will be unavailable to him and his vile philosophy, he needs a quick lesson in demographic math. One way or another, the NRA and its extremist ideology are on a path to extinction.” 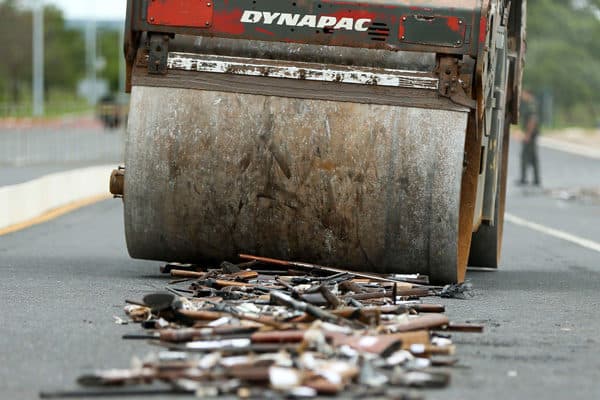 Conservatives pretend this isn’t true. Ben Shapiro may defend the Second Amendment, but famously declared: “I don’t give a good damn about the so-called ‘browning of America.’ Color doesn’t matter. Ideology does.” Yet “color” and ideology are inextricably linked, especially when it comes to guns. A 2013 Pew Research study shows 82 percent of gun owners in America are white.

The data clearly show that the shifting racial composition of the country means the end of the Second Amendment:

Gun ownership is more common among men than women, and white men are particularly likely to be gun owners. Among those who live in rural areas, 46% say they are gun owners, compared with 28% of those who live in the suburbs and 19% in urban areas. There are also significant differences across parties, with Republican and Republican-leaning independents more than twice as likely as Democrats and those who lean Democratic to say they own a gun (44% vs. 20%).

Liberals are counting on non-whites to be allies. As the Washington Post put it in 2015:

Polls show that whites tend to favor gun rights over gun control by a significant margin (57 percent to 40 percent). Yet whites, who comprise 63 percent of the population today, won’t be in the majority for long. Racial minorities are soon to be a majority, and they are the nation’s strongest supporters of strict gun laws.

An overwhelming majority of African Americans say that gun control is more important than gun rights (72 percent to 24 percent). . . .

Although only about 5 percent of the population today, the Asian American population is predicted to triple over the next few decades. A recent poll of Asian American registered voters found that 80 percent supported stricter gun laws.

Perhaps in response to these attacks, the NRA has pursued racial diversity — largely without success. The people who attend its conventions are overwhelmingly white. Van Jones, a former leader of a Communist group called STORM and now a CNN host, casually calls the NRA this generation’s “KKK.”

David French of National Review recently argued that the Left will never win the argument on gun control, but it doesn’t have to change anyone’s mind. All it needs to do is replace those who are allowed to decide. As demographics change, the NRA’s effectiveness will wane. Millennials of all races — except for whites — are overwhelmingly in favor of gun control. Even mentioning the validity of “arguments” in this context is as pointless as running a Republican for mayor of Baltimore.

America may not be invaded by a foreign army, but it is being occupied by a foreign people, and when it comes to constitutional rights, the consequences are the same. Conservatives who value the Second Amendment better wake up before it is too late.

Paul Kersey lives in Denver, Colorado and is the author of Escape from Detroit.
< Racial Quotas Kill Kids
Poster in B.C. Schools About White Privilege Hits Nerve with Some Parents >
Blog
Commentary
Videos
Podcasts
Follow us