Photos: The Violence and Chaos to Our South (Also Known as Mexico)

The news of nine Americans slaughtered at the hands of drug cartels in northern Mexico has shocked Americans. Tragic as these killings were, they were not that unusual for Mexico, parts of which seem to be in a state of permanent anarchy. Its government has been incapable of controlling gangs and drug dealers that dominate parts of the country — and that has been the case for well over a decade. This past Tuesday, at least nine people were killed and 16 vehicles torched in a wave of violence in the northern city of Juárez.  The next day, farmers preparing a plot of land near Mexico City found 13 bags of human remains. Because the violence normally does not impact Americans, we don’t hear much about it.

If the American media begin reporting on the atrocities committed across Mexico, I suspect more of our own citizens would agree with Ann Coulter and support building the wall (especially since border walls work).  Not even liberal elites or devout Marxists want the USA to become the country where these photos were taken: 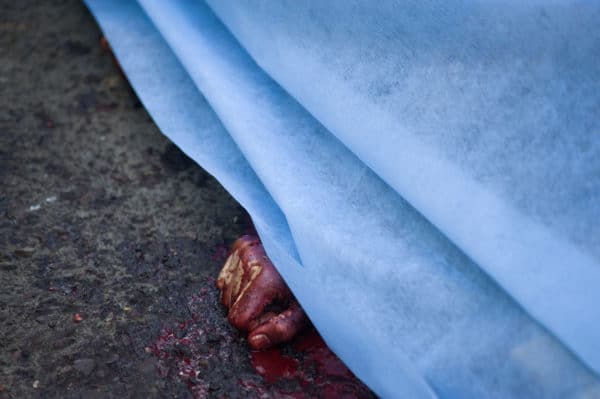 From under a blanket the blood stained hand of a man is seen after he was assassinated in a drug related killing in the city of Culiacan, Sinaloa state the cradle of drug trafficking in Mexico. (Credit Image: © Louie Palu / ZUMAPRESS.com) A man shot multiple times in drug related violence is pulled toward a stretcher by a medic in Culiacan, Sinaloa, Mexico. (Credit Image: © Louie Palu / ZUMAPRESS.com) Here, Mexican police are transporting captured members of the “Los Zetas” cartel from Nuevo León (which borders the US), to Mexico City for processing. It is the police that have their faces covered, in an attempt to keep criminals from easily identifying them and meting out reprisals.
(Credit Image: © SSP / EFE / ZUMA Press) More seized weapons and drugs. As you can see, the drug dealers of Mexico have plenty of equipment normally only found in militaries. (Credit Image: © EFE / ZUMAPRESS.com) Mexican cartels even build their own military-style tanks, such as this one, seized by Mexican authorities near the US border. (Credit Image: © Caters News / ZUMAPRESS.com) It is not unusual for the military to patrol the streets in Mexico in an attempt to establish order, as seen in this photo. However, that white banner you see is an add from Los Zetas offering military men good wages if they lay down their arms and join the gang. (Credit Image: © EFE / ZUMAPRESS.com) More from the armory seized after the shootout described above. (Credit Image: © El Universal / ZUMA Press) The bodies of men executed and dumped on the side of the highway in Navolato, Sinaloa. (Credit Image: © Louie Palu / ZUMAPRESS.com) 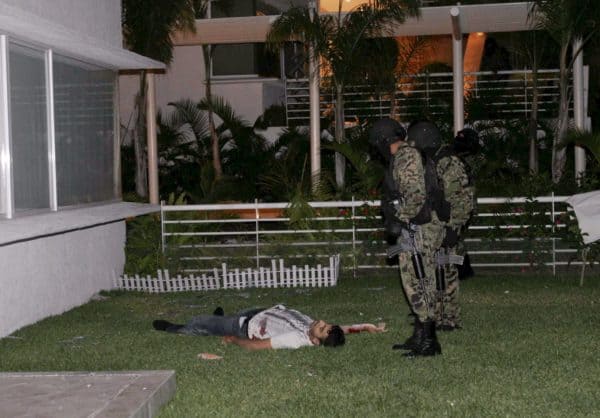 A ‘sicario’ (hired gunman) dead after clash with members of Mexican Navy in an apartment complex in Cuernavaca, where drug lord Arturo Beltran Leyva and members of his Sinaloa cartel was shot dead. (Credit Image: © DPA / ZUMApress.com) The bodies of men executed and dumped on the side of the highway in Navolato, Sinaloa. (Credit Image: © Louie Palu / zReportage / ZUMA) 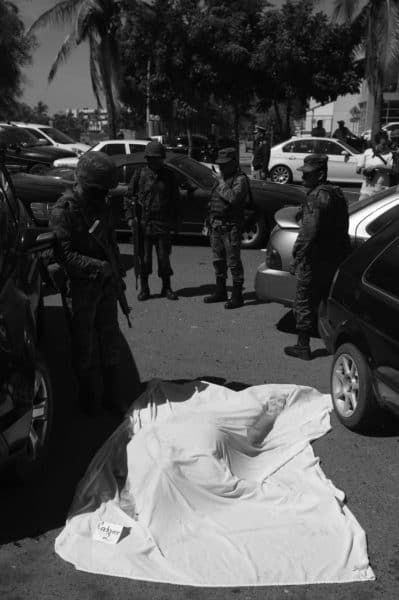 Surrounded by Mexican soldiers lies one of two men killed in a drug related assassination on a main street in broad daylight in Culiacan, Sinaloa which is the home turf of the Sinaloa Cartel in Mexico. (Credit Image: © Louie Palu / ZUMAPRESS.com)

Chris Roberts is the Director of Special Projects at American Renaissance. He can be contacted via email: [email protected]
< The Connection Between the “Beltway Sniper” and the Nation of Islam
A Salute to Veterans >
Blog
Commentary
Podcasts
Follow us