Bruno Gollnisch is one of the most influential members of the Front National. He is a member of the FN political bureau, secretary general of the party, and vice president for foreign affairs. He is currently a member of the European Parliament and a regional councilor for the Rhone-Alpes region. He is also a member of the Paris bar, holds a doctorate in international law, speaks fluent Japanese, and has the rank of capitaine de frégatte in the naval reserve. What follows is his extraordinary reply to a single question in a recorded interview he gave to American Renaissance on September 24, 1998.

“What explains the constant hostility faced by the Front National?”

The answer is fairly simple, but there are many things, many forces that work together. First of all the Front National is an outsider in the system. Obviously it displeases the left and the extreme left, and it displeases the “conservatives” — who have conserved nothing — because it takes votes away from them. Therefore we are an outsider, a competitor in the hyper-competitive world of politics, so everything goes in an attempt to reduce the audience of the Front National.

Second, the FN is particularly hated by the left because it has done the thing the right should have done and did not do — and this failure is the right’s greatest crime — the front has challenged the moral sovereignty of the left. Until now in France, and broadly speaking in Europe as well — but especially in France since the end of the Second World War — the left and in particular the Communists have laid hands on the entire cultural domain: teaching, research, the media. Now, when I talk about Communists, in 1945 it was in fact the Communist Party, but now it is a little more subtle and goes all the way from the people you call “liberals” in America to outright Trotskyites.

These former Communists have now permitted themselves to become more bourgeois, in the sense that they accept the idea of receiving money, of making profits, and have transformed themselves into bosses — sometimes pitiless bosses — but they have retained the same ideas that are utterly destructive to the traditional ideas we defend.

So everything that is in the area of learning, of art, of culture has been abandoned to the left. Which means that when the right was in power [in France], it did not really exercise power because the left had drawn a set of boundaries outside of which the right was not allowed to stray. Because to step outside those lines meant you were not democratic, you were not republican, you were fascist, etc. And this was strictly observed . . . 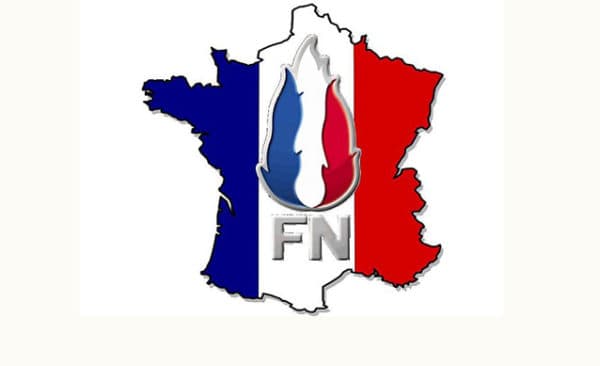 The traditional right also had a great admiration for Communism — even though they rejected the crimes of communism. They would say that the victory of Communism was inevitable, so we have to go in that direction. But the Front National has brought all this up for reexamination. The Front National dared to attack the reality of the left, showing that the Communists’ claim of devotion to social justice was nothing more than the enrichment of a caste — a caste that was much more rotten and corrupt than the conservatives had ever been. We have also shown that the left’s vaunted welfare system generally destroyed all economic dynamism. And for this reason we are hated — because we dare to say a certain number of things that are true but have been taboo.

Thirdly, we are detested by a certain number of pressure groups, who do not accept the idea of the nation. Unhappily, I am obliged to say it: There are a certain number of Jewish organizations, which are quite patriotic when it comes to Israel, but for historical and other reasons, do not accept the slightest sign of national sentiment when expressed by others. We do not confuse these organizations with the entire Jewish community. These are the spokesmen, the pressure groups, the most influential elements. They oppose us despite the fact that we practice no anti-Semitism, despite the fact that we have members and even elected representatives who are Jewish. (Of course, they are greatly persecuted within their own communities for their attachment to the Front National.)

As for our struggle against immigration, it has won the hostility of the left — which hoped to use immigrants to make up for its losses in the French working class. The French were turning away from Communist and other labor unions, and the unions wanted to recruit Algerians, Turks, etc. But our efforts have won the hostility also of certain economic classes — the bosses — who saw immigration as a way to get a labor force that was relatively inexpensive. Of course, this was a very short-term view, because when you add up all the costs — social costs, costs to the penal system, welfare (and we have quite an extensive system of welfare) you can see that our immigration policy has been a disastrous policy economically.

As an aside, on the question of immigration, Le Pen was once on a trip to the United States, where he had a debate with some university students. One student objected to our position on immigration, saying that the United States is a great nation that has been built essentially through immigration. Le Pen agreed but told the student he had forgotten something: “In France,” he said, “I am Sitting Bull. I represent the natives.” 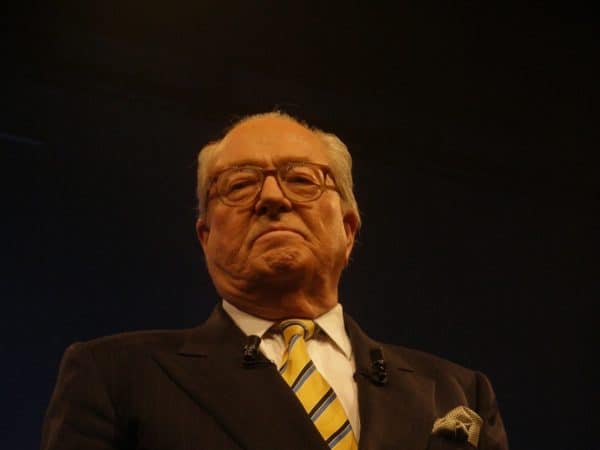 But to return to the hostility we face, given that 97 percent of the media in this country are in the hands of the groups I have described, this hostility is pounded into people’s heads with all the power of propaganda. I would say that for children from the very youngest age, they get courses in history that are truncated or falsified, they have obligatory courses in anti-racism. There are even exhibitions on the Second World War that show concentration camps and then end with photographs of Le Pen! That was the case with the Anne Frank exhibition. It’s just incredible.

This ideological weapon of the left is a Pavlovian reflex. They used it against General De Gaulle and they use it against us. When De Gaulle left the government and set up a new party of the right, there were posters put up by the left, in which De Gaulle’s face appeared as a mask and behind the mask was the face of Hitler. Well, that is exactly the same poster the left has used with Le Pen. Le Pen is taking off a mask — the mask of his own face — and behind it you see Hitler.

The elements of this propaganda line go like this: The right equals Vichy — although things are much more complicated than that. (In the Vichy government, for example, there was the former General Secretary of the CGT [the Communist trade union], and [Pierre] Laval [premier in the Vichy government and executed for treason in 1945] was a politician who came from the socialists — things were very complicated.) But the right equals Vichy though, as I say, this is not entirely correct.

Next, Vichy equals collaboration, which is not correct either, because no fair-minded Frenchman thinks that Marshal [Henri Philippe] Pétain [head of state of Vichy France, condemned to death in 1945 but sentenced to life in prison] did anything but try to limit the damage done by the military occupation of his country. But Vichy equals collaboration. Collaboration equals Nazism. Nazism equals concentration camps. Concentration camps equals gas chambers, which equals extermination, which equals absolute horror. Therefore, the right equals absolute horror. This is what is constantly pounded into us by totalitarian propaganda.

What makes this all the more worrying is the fact that we live in a country that has all the appearances of liberty. If this constant propaganda were in a country with a single political party and were put out by the country’s only television station, by party journalists in military uniform, no one would take it seriously.

But when this very same propaganda is broadcast by six channels of television, things appear to be different. A press agency may make a mistake but the mistake can be picked up by all the television stations and radio stations and all the newspapers, including the “conservative” papers. The reader or the listener gets all this from media organs that have the reputation (generally false) of having different points of view, and he thinks he is clearly in the presence of objective truth. I would guess that in the United States you have the same causes, which produce the same effects.

I am myself convinced that what we have is a struggle between what I might call the Natural Order — which would have to do with Creation and with eternal values (which always have to be rediscovered) — as opposed to a revolutionary will to power. This will to power is trying to establish a social order not on reality, but on theories entirely established by men. I myself believe in the Creator, but this revolutionary philosophy attempts to found the social order on human will alone, a Promethean will. This generally ends in catastrophe.

We had the French Revolution, which claimed to be founded exclusively on human reason, and it ended in the massacres of the Terror. We have had Marxist revolutions, which claimed to base everything on the class struggle to liberate the proletariat, and this ended in gulags, famines, wars, misery, and death. We also had in a more limited geographic area the National Socialist revolution, in which all was founded on a largely mythical racial purity — though I certainly affirm ethnic facts — but that, too, is not an absolute to which the entire social order must be sacrificed.

And now, in my opinion, now that the Marxist revolution has failed, we have another form of the revolutionary idea, and I see its progress very clearly within the European Parliament, for example — or in the organizations that are part of the United Nations. This is an international revolutionary ideology, like those that went before — like Marxism, in particular — which, for lack of a better term, I would call anti-racism.

Chesterton said the world is full of Christian ideas gone mad. For example, the idea of social justice degenerated into the Marxist revolution. But anti-racism does not derive exclusively from a Christian idea gone mad. After all, anti-racism could be the result of a generous sentiment of people who say, “I find that the unfortunate immigrants who come here because of hunger and misery in their own countries are not welcomed in my country, and I will try to help because of my feelings of generosity and compassion.” That is something we could discuss if that were really what was going on. We could talk about whether there are solutions other than immigration to the problems of the Third World. That could be an acceptable discussion.

But that is not at all what is happening. I see in the European Parliament that immigration is to be forced upon us, that miscegenation is to be forced upon us, and this is part of a messianic will to revolution. There is an ideal of the New Man, who must be neither white nor black. This ideal would be, say, Michael Jackson. Neither black nor white, neither man nor woman, this pitiful jumping jack ends up in dreadful stories of pedophilia.

But this will to suppress differences of race, sex, culture, traditions — this is a revolutionary idea, a messianism. It has its dogmas, its preachers, its witch trials, and its excommunications. And we [the FN] are the objects of a perpetual witch trial.