Mark S. Weiner, The Rule of the Clan: What an Ancient Form of Human Organization Reveals About the Future of Individual Freedom, Farrar, Straus and Giroux, 2013, $27.00, 258 pp.

What is the oldest, most natural form of human organization? The clan or tribe. Even in societies that that are not ruled by clans, people have instinctive kinship loyalties. In the United States, this loyalty is weakest among whites, who rarely show much attachment beyond their immediate family, and strongest among blacks, most of whom have a strong sense of loyalty to their entire race. 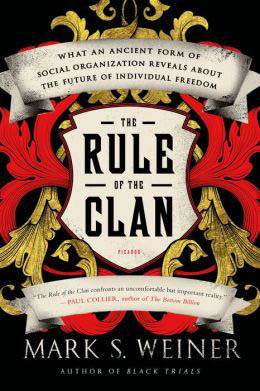 Mark S. Weiner of Rutgers University Law School has written a book about the powerful attractions of clan loyalty and the persistence of clan rule in some parts of the world. He has interesting things to say about how clans work, and offers case studies of clan societies past and present. He also understands why clan loyalties are so powerful and how they shape a member’s identity.

And yet, this book is irritatingly couched as a solution to an imaginary problem. Prof. Weiner actually seems to think that proponents of small government want to hack away the state to the point that the United States could fall into clan chaos. Get the government out of medicine and education, and we’ll be back to the blood feud. It’s hard to think of a stupider defense of big government but fortunately there are other, better things in this book.

Prof. Weiner writes that “clan societies meet certain basic human needs more effectively than liberal nations.” (By “liberal,” he means any non-clan-based democratic country.) He’s right. Members have dense, interlocking associations with many people. They know exactly who they are, and how they fit. Compared to the “bowling alone” individualism and loneliness of many in the West, clansmen — Prof. Weiner concedes he is writing about tribes as well, but doesn’t like the T-word because of “negative and racialist connotations” — have a profound sense of identity and affiliation.

The identity of clan members tends to be collective. They take great pride in the accomplishments of their fellows and they share responsibility for failure. A clansman’s offense against a neighboring clan could bring retaliation against anyone, so clans police their members and make sure they behave.

Clan relationships are also permanent. In “liberal” societies, we have a few ties we cannot cut — laws enforce a parent’s obligations to his children — but most of our associations are voluntary. We can change jobs, skip town, join a new club or church. Tribesmen find deep meaning and security in their tribe, but they are stuck with it.

If there are disputes within the clan, councils of elders dispense justice, and there is usually not much need to enforce decisions. Members do as they are told because violators could pay a heavy penalty in ostracism or even violence.

Clans have clear boundaries. These are usually set by lineal descent, but sometimes non-related but similar groups known as septs may become part of a clan. Clans may join forces in the face of foreign invasion, but there is almost never any doubt about membership. Prof. Weiner reports that clansmen in Somalia can often trace their ancestry back 20 generations.

Prof. Weiner does not mention this, but many clans physically mark their members. Among West African tribes it is still common to scar the faces and bodies of children so they will always be recognizable as members. Highland tartans served the same purpose, as do the “colors,” branding, and tattoos of American criminal gangs.

Prof. Weiner writes that a legitimate American organization that closely resembles a clan is the Marine Corps. Although the corps is not a kinship group, many corpsmen are loyal for life, take pride in each others’ accomplishments, and share the humiliation when a Marine misbehaves.

The most obvious problem with clans is that they recognize no superior authority. Prof. Weiner notes, however, that catastrophic feuding is rare; clan societies have what he calls “justice without government.” There are rules that cover violations, and a well-considered act of revenge often squares the books. Sometimes elders from a third clan reconcile hostile clans. No one wants all-out war, so there are built-in curbs against it, but sometimes clan honor requires mass violence. Much blood may be shed before one clan is routed or the exhausted belligerents finally make peace.

The most interesting parts of this book explain how clans worked in the past and continue to work in the present. Iceland, settled in 870 AD by Norsemen, was one of the most finely regulated clan societies. There were courts and a legislature — the famous Althing — and by 1117 the legal code ran to several hundred pages. However, there was no executive authority; kin banded together to enforce judgments. This system worked for more than 300 years but divisions sparked by the introduction of Christianity led to several decades of feuding, and in 1262 the chieftains agreed to submit to rule by Norway. Icelandic clan society is dramatically depicted in epics such as Njal’s Saga.

In present-day Pakistan, clan loyalty helps explain why no one handed Osama bin Laden over to the US authorities, despite a $25 million reward. Anyone tempted by the money knew he would face the wrath of the clan if he violated both the code of hospitality and the prohibition against placing a fellow Muslim in the hands of infidels.

The Palestinians, according to Prof. Weiner, are hopelessly clan ridden. Both the Gaza Strip under Hamas and the West Bank under Fatah are wracked by feuding, which makes it hard for either group to negotiate consistently with Israel or anyone else.

In parts of India, disputes are settled by clan councils. Councils are much quicker and more efficient than Indian courts, and probably dispense justice that is at least as fair, and certainly in accordance with tribal expectations. Albania has traditionally been a clan-based society but was held together by Communists. There has been a return to feuding since the collapse of the old regime; people build walls around their property for protection, and some children stay away from school for fear of clan violence.

The Nuer of South Sudan have rigid clan affiliations that clearly identify all people as either kinsmen (actual or accepted as such) or strangers. This difference governs every aspect of how they deal with each other.

Prof. Weiner clearly thinks that feuding alone is reason enough to abolish clans, but he has other reasons to dislike them:

[C]ompared with modern liberal states, communities governed by the rule of the clan possess a markedly diminished conception of individual freedom. This is because under their legal principles people are valued less as individuals per se than as members of their extended families. The rights and obligations of individuals are fundamentally influenced by their places within the kin groups to which they inescapably belong.

It is true that modern Westerners might find clan life suffocating, but people accustomed to it think we live isolated, fragmented lives. Prof. Weiner concedes that “liberal societies are threatened by anomie,” but insists that individual freedom is a higher value than tribal identity.

He also argues — wrongly — that clans are bad because they mistreat women. Muslim clans mistreat women, but ancient Germanic, Scandinavian, and Anglo-Saxon clans treated women well. It is Islam that mistreats women, and fully-functioning Islamic states can mistreat them as much as any clan. Ride of the Valkyries by William T. Maud (1890). Women hold honored positions in the Norse pantheon.

Prof. Weiner’s final argument against the clan is that “societies founded on kin solidarity lack the common consciousness necessary to pursue truly public ends.” This is for the most part true. However, Prof. Weiner seems to think any group of people can build a “liberal” society if we just point the way.

Some simply cannot, and average IQ probably matters most. In The Limits of Democracy, Tatu Vanhanen of the University of Tempere, Finland, shows the unmistakable correlation between a population’s intelligence and its capacity for representative government. High-IQ people show more mutual trust and can see beyond kinship relations to larger associations. Clans are especially powerful in places — mostly Muslim — that practice cousin-marriage, which both lowers IQ and tightens kinship bonds.

The parts of the world run by clans are probably doing about the best they can. A strongman who imposes order might be an improvement — or he might not. In most of black Africa, what passes for government is simply the means for the tribe in power more efficiently to suck the blood of every other tribe.

Prof. Weiner makes another mistake when he says that since “liberal” societies foster individualism and “truly public ends,” we have a moral obligation to use “hard” and “soft” power to drag clan societies into the sweet light of liberalism. This is the dangerous nonsense that leads to “nation building,” in which we kill a lot of people — including the one man who had figured out how to control sectarian violence — and are then baffled because the survivors do not embrace Robert’s Rules of Order and women’s liberation. Afghanistan, Iraq, and Libya are worse — more clan ridden, if anything — since our bloody neddling, and Syria is hardly likely to improve if we start shooting people.

But this is the folly that follows from believing, as Prof. Weiner does, that the entire world will revert to clannism unless the United States is constantly projecting power. This violent arrogance makes us hugely unpopular.

Prof. Weiner also thinks we have to promote “liberalism” because “clan societies . . .  provide safe-havens for a wide variety of militant groups waging war against liberal democracies and other modern governments.” More nonsense. No one is waging war against modern governments. Foreigners wouldn’t care if we were a divine-right monarchy. They hate us because we bomb them or their friends, and we support other countries that bomb them or their friends.

Prof. Weiner’s trump argument — that clans are bad because people die in feuds — is not nearly as powerful as he thinks. Strong central states — not clans — are the unsurpassed champions of butchery. Even the Hutu and Tutsi tribes, who managed to hack nearly a million of each other to death with machetes in 1994, were amateurs compared to the modern nations that fought two world wars and imposed scientific socialism on themselves.

Prof. Weiner thinks the United States — the indispensable liberal society — is holding clan authority and clan violence in check around the world, but how many people have we had to kill in the last 10 years to do it? Estimates in Iraq alone run from 100,000 to 650,000. All the feuding clans in the world have probably not killed anything near that number.

But if Prof. Weiner misunderstands foreigners, his misunderstanding of his own country is even more astonishing. “[T]here has been a widespread call . . . to engage in wholesale dismantling of public institutions,” he warns, adding that “the individualism we cherish will be lost as a result of a deterioration of the state.” He imagines a future 50 years from now in which there are no courts and no police. Family-based clans, religious groups, racial gangs, crime syndicates, and international corporations have filled the void. “Universities have been captured by international businesses,” and courts are run by international companies that favor their own employees.

States never “waste away through neglect.” States always seek more power. They can be destroyed by stronger forces, but they never “vanish.” The idea that even the government of Yemen or Mali would “waste away” is fantastic. The US federal government in President McKinley’s time was a scrawny thing by today’s standards, but the anarchist who shot him in 1901 certainly had no hopes that the state would “waste away.”

The prospect of rule by feuding clans would seem to be about the least convincing argument for yet more government, but that — believe it or not — is the main idea of this book.