If President Obama did this, Republicans would be indignant:

Very disappointed in Prime Minister Stefan Löfven for being unable to act. Sweden has let our African American Community down in the United States. I watched the tapes of A$AP Rocky, and he was being followed and harassed by troublemakers. Treat Americans fairly! #FreeRocky

President Donald Trump is trying to get special treatment from the Swedish authorities for the Harlem rapper Rakim Athelaston Mayers, known as “A$AP Rocky.” Mr. Mayers and his entourage fought with a couple of non-whites on the streets of Stockholm.

It’s not entirely clear what Mr. Mayers did. In the video the President must have seen, an Afghan migrant named Mustafa Jafari keeps following Mr. Mayers’s group. The group tries to leave, but Mr. Jafari does not leave them alone. “Just for the cameras, we don’t want no problems with these boys,” Mr. Mayers says. In this video, there is no fight.

However, another video shows Mr. Mayers throwing Mr. Jafari to the ground, and he and his group attack him. Mr. Mayers allegedly used a bottle, and Mr. Jafari’s injuries include deep cuts. Maybe “A$AP Rocky” and friends snapped when the man would not leave them alone. Mr. Jafari is an Afghan migrant with convictions for illegal drugs and assault.

Mr. Mayers and two companions were charged with assault and the police cleared Mr. Jafari of all charges. President Trump took the trouble to call up Swedish Prime Minister Stefan Löfven at the behest of Kanye West and asked Mr. Löfven to help the rapper. The President even “vouched” for Mr. Mayers’s bail, whatever that means. The Prime Minister explained that Sweden’s judicial system is independent. 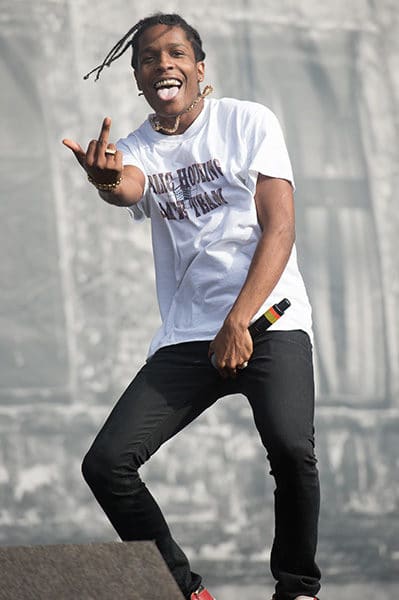 President Trump claims to be acting for the “African-American community.” He seems to think this means freeing criminals as part of “sentencing reform” and fighting for rappers. He’s right in a crude way. Lenient law enforcement disproportionately benefits blacks. Of course, they usually prey on other blacks, but racial solidarity and the “no snitching” rule mean that blacks don’t dare admit this.

One could argue that President Trump is simply intervening on behalf of an American citizen. Of course, he didn’t intervene to help Jared Taylor when he was banned — without explanation — from the 28-member European Schengen Zone. Of course, no black celebrity told him to. President Trump isn’t defending Americans, he’s pandering to blacks.

In 2017, President Trump retweeted messages from Jayda Fransen, deputy leader of the Britain First Party. When the British government arrested her for political speech, she begged President Trump for help. He did nothing.

He also did nothing when an independent report and video footage showed antifa attacked demonstrators at the 2017 Charlottesville protest. We know President Trump watched the footage. “There was a group on this side, you can call them the left, you just called them the left, that came violently attacking the other group,” he said at the time.

And yet, President Trump’s administration prosecuted those who defended themselves. The President doesn’t have the same consideration for them that he has for some rapper.

Mr. Trump taunts antifa, but his administration has taken no action against them, even after a terrorist attack. In contrast, the Trump Administration banned Austrian identitarian Martin Sellner — whom no one could consider “violent” — from traveling to the United States. This petty persecution sabotaged Mr. Sellner’s wedding to his American fiancée, Brittany Pettibone.

There’s something else to the Swedish story. A$AP Rocky and his friends met some of the unassimilable foreign “migrants” nationalists have warned about for years. Slate says, “The rapper has unwittingly stumbled into a bitter debate over race, crime, immigration, and the future of the country’s famed welfare state.” Slate accuses the nationalist Sweden Democrats of wanting to use immigrant crime to dismantle the welfare state: “So long as the population was overwhelmingly blond and blue-eyed, conservatives found it difficult to undermine support for the high taxes that subsidized the welfare state . . . . Now with higher immigration rates and increased diversity, Sweden may be starting to lose their sense of collective social responsibility.”

Naturally. Diversity destroys trust. It’s easy to be a “humanitarian superpower” when people are “overwhelmingly blond and blue-eyed;” it’s hard when non-whites are attacking your people and throwing grenades. The Sweden Democrats don’t want to “end” the welfare state; they want to save it from immigrants.

Even the New York Times may even be dimly aware of this. It recently asked, “The Nordic Model May Be the Best Cushion Against Capitalism: Can it Survive Immigration?” The article confirmed that most people don’t want support programs for foreigners. You can have social democracy or diversity, not both.

Sweden’s establishment and President Trump’s administration are alike in that they ignore the interests of whites. Why are Afghans bothering people on the streets of Stockholm? Why is President Trump trying to free some rapper when his supporters are deplatformed, physically attacked, or jailed by his own administration? Why do nationalists have no access to the President, but Kanye West has his ear?

Some people call this Clown World. It’s also proof we have no independent voice within our own countries. President Trump doesn’t speak for us; we must speak for ourselves. He wants black votes — but takes nationalists for granted.

Mr. Hood is a staff writer for American Renaissance. He has been active in conservative groups in the US. You can follow him on Gab.
< What We Know, Don’t Know, and Don’t Want to Know about Crime
Drag Queen vs. David Duke: Whose Tweets Are More ‘Toxic’? >
Blog
Commentary
Videos
Podcasts
Follow us