In White Fragility, Robin DiAngelo claims that whites do not want to talk about racism because we do not want to admit that we are racists. Our inability to admit that we are racist is what makes us “fragile.” Miss DiAngelo’s basic position leaves whites no way out: All whites are racist, so the only distinction between them is those who — like her — virtuously admit their guilt and those who deny it. Any white who denies his racism is not only a racist — because all whites are racist — but is showing his “fragility” by denying it. Non-fragile whites who admit their guilt can work towards salvation, but they can never be fully saved. Racism is a permanent condition for whites, so Miss DiAngelo expects us forever to be saying the secular equivalent of “Forgive me Father for I have sinned.” We must atone for our sins by constantly thinking about how to benefit non-whites and about how we consciously or unconsciously oppress them.

The civil rights legislation that we passed, and the anti-poverty programs designed to help blacks that we finance with our taxes were not nearly enough. That blacks are still not as prosperous as whites is proof of our sinful nature. Black problems are my own fault, my own most grievous fault. Mea culpa, mea maxima culpa.

Robin DiAngelo is a professional diversity consultant. She earns a good living telling whites how racist they are, and her book is full of stories from her career. She writes: “I am a white woman. I am standing beside a black woman. We are facing a group of white people in front of us. We are in their workplace and have been hired by their employer to lead them in a dialogue about race.” The white people are angry, but they have no reason to be: “I have after all, only articulated a definition of racism.”

I can guess why they were angry. Their employer made them sit through a scolding from two well paid Social Justice Warriors, and they knew that it would be dangerous for them to discuss their views of blacks — views based on experience and easily documented facts. In these sessions, blacks are supposed to talk openly about how whites have hurt their feelings. Whites must not talk about blacks who mugged them, raped them or the women they care about, shot them, or killed friends or relatives. If anyone were to mention black crime, we would need to explain immediately that it is caused by white racism. This is not the dialogue on race the United States needs. This is reeducation. In a real dialogue, whites would talk honestly about race. Geneticists would be able to discuss their discoveries of genes that related to intelligence and criminal or sexual behavior, and whether these genes are found equally among the races.

When a white schoolteacher in one of Miss DiAngelo’s struggle sessions describes a bad experience with blacks, Miss DiAngelo dismisses it as “racially problematic.” She tells the teacher, “I am going to ask you to consider not telling that story in that way again . . . I am only asking you to try to listen with openness.” She won’t listen to the white teacher, but the teacher has to listen to her. This is a monologue white employees must endure to keep their jobs.

Miss DiAngelo explains that not even whites who took part in civil rights demonstrations can claim to be innocent of racism: “Might many have dominated discussions, not listened to others, and assumed to know what was best?” She is describing herself.

Miss DiAngelo writes that we “see stereotypical depictions of black people in the media . . . we live in a culture that circulates relentless messages of white superiority.” What culture is that? The message we get from Hollywood is that blacks behave at least as well as whites, and often better. Miss DiAngelo writes, “Today we depict blacks as dangerous, a portrayal that perverts the true direction of violence between whites and blacks since the founding of this country.” She clearly doesn’t realize that whites today are vastly more likely to be victims of black violence than the other way around.

Miss DiAngelo claims that “affirmative action is a tool to ensure that qualified minority applicants are given the same employment opportunities as white people.” More fantasy. Affirmative action discriminates against whites and Orientals, lowers standards for blacks, and advances many blacks to positions beyond their capacities.

Robin DiAngelo writes that ”George Zimmerman would not have stopped me as I walked through a gated suburban neighborhood” because she is white. Does she have no idea that middle-aged white women have vastly lower crime rates than young black men? And that if George Zimmerman had followed a young white man, the man probably would have calmly explained who he was and why he was there. That is what I did in a similar situation. Trayvon Martin felt dissed, so he attacked George Zimmerman, threw him to the ground, and began punching him. 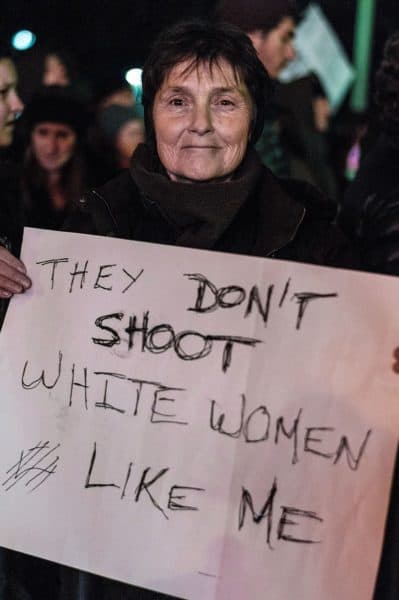 Robin DiAngelo claims that the worst racists are whites who deny that they are racist. She also dislikes the Martin Luther King line about judging people “by the content of their character.” It “was seized upon by the white public because the words were seen to provide a simple and immediate solution to racial tensions: pretend that we don’t see race and racism will end.” So whites are in an impossible bind: If they try to ignore race that is “color-blind racism.” But wasn’t treating people differently because of race supposed to be the original problem?

Miss DiAngelo writes: “Anti-blackness is rooted in misinformation, fables, perversions, projections and lies.” What misinformation? What lies? She seems entirely unused to defending her assertions. She has spent too much time haranguing captive audiences who don’t dare talk back.

Nowhere in this book is there any acknowledgement that by every criterion blacks are, on average, less intelligent than whites. Nowhere is there any mention that blacks have a crime rate that is eight times the white rate, and an illegitimacy rate three times the white rate. Nowhere does Miss DiAngelo show any understanding of why someone might have a low opinion of blacks.

If I ever made a statement Robin DiAngelo would consider “racially problematic,” it was based on experience, or is a fact I can prove. If by her definition I am a “racist,” I don’t feel one bit guilty about it. The fear of being called a “racist” stifles the dialogue on race people like Robin DiAngelo claim to be leading, but which they are doing everything they can to suppress.

John Engelman has been posting at American Renaissance since 2010 when he read The Color of Crime.
< On the Phenomenon of White Shaming
‘How Did We Become Enemies?’: Racism and Reconciliation in Canada >
Blog
Commentary
Videos
Podcasts
Follow us