A Blow to the Hate Crimes Myth 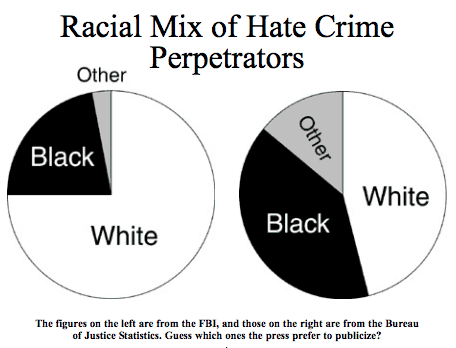 The prevailing view is that hate crimes are overwhelmingly committed by whites against non-whites. The two most famous racial hate crimes are the murders of James Byrd, who was dragged to death by whites in 1998, and of Emmett Till, who was murdered in 1955 for flirting with a white woman. Amazon.com sells no fewer than nine books about Emmett Till and two about James Byrd, and PBS has devoted documentaries to both men. Black-on-white murders that are just as clearly motivated by racial hatred are largely ignored.

AR has tried to give a more balanced picture. Our report, The Color of Crime, found that blacks are 2.25 times more likely to commit hate crimes against whites (including Hispanics) than the reverse. A recent report from the Bureau of Justice Statistics (BJS), “Hate Crimes Reported by Victims and Police,” finds that hate crime perpetrators are even more lopsidedly black.

The Color of Crime was based on the only national statistics on hate crimes then available: the FBI’s annual Hate Crime Statistics. The FBI reports only those crimes police departments consider to be motivated by hatred, but the new BJS study, based on a broad population sample, asks victims if they thought hate was the motive.

The first major difference in results between the FBI and the BJS reports is the sheer number of hate crimes. The FBI says that in 2003 — the most recent year for which figures are available — the police categorized only 7,489 crimes as hate crimes. The BJS, on the other hand, found that from 2000 to 2003 there was an average of 210,000 hate crimes per year. Why such a huge difference? First, only 40 percent of the BJS hate crime victims reported the crimes, so the police never learned about them. Second, police designate a crime a bias crime only if they think they have enough evidence to prosecute it as one. The BJS report tabulates crimes that victims merely think were motivated by hatred, a looser and more subjective standard.

Which numbers are more likely to be accurate? The BJS is certainly on firmer ground. As we noted in The Color of Crime, according to the National Crime Victimization Survey, there are 844,000 interracial violent crimes reported to police every year, but the FBI reports that only 2,168 were motivated even in part by racial hatred (the previous figure of 7,489 includes non-violent crimes like intimidation and vandalism, as well as crimes against homosexuals, Jews, the handicapped, etc.). If the FBI is right, only 0.3 percent of interracial violent crimes have a bias motive. The BJS statistics suggest there are roughly 100,000 violent interracial hate crimes each year — approximately 12 percent of all violent interracial incidents. Given the racial animosity in the United States, this is a much more credible figure than the FBI’s 0.3 percent.

The most recent FBI report said 22 percent of perpetrators were black; the BJS study finds 40 percent were black, while 46 percent were white or Hispanic. (Hispanics are lumped in with whites when they are perpetrators. We can call this category W&H for “white and Hispanic”). This means any given black is 5.5 times more likely than a member of the W&H group to commit a hate crime. This multiple applies to both violent and non-violent crimes. Judging from disproportions in non-bias crime, the black/W&H multiple for violent bias crimes is likely to be larger.

These substantial differences lend support to a long-standing race-realist suspicion: that even when the evidence of hate is equal, police are more likely to label a crime a “hate crime” when the perpetrator is white than when he is black. As American Renaissance has reported (see AR, Nov. 2000, “Hate Crimes 101“), police training materials on hate crimes portray whites as the exclusive perpetrators of racial hate, and police departments often appear to resist labeling blacks as hate criminals even when the evidence is strong.

The BJS numbers tell us furthermore that not only are blacks 5.5 times more likely than W&H to commit hate crimes, but that when black criminals commit violence, they are more likely than W&H criminals to be motivated by bias. Blacks commit 24 percent of all violent crimes, but approximately 39 percent of all violent hate crimes. The figures for W&H criminals are 62 percent and 44 percent. This means black criminals are more than twice as likely as W&H criminals to be motivated by hatred when they commit violent crimes.

Critics might cast doubt on the BJS statistics because they reflect victims’ subjective judgments of the motives of perpetrators; an angry victim might impute racial animus where none existed. However American society teaches blacks, but not whites, that other races are prejudiced against them, so it would be more likely for blacks to overestimate racial bias.

Jack Levin, a Northwestern University hate crimes scholar who is a major proponent of the whites-as-perpetrators view, finds the BJS report more credible: “It’s not necessarily completely accurate, but I would trust these data before I trusted the voluntary law enforcement reports to the FBI.”

The BJS statistics are a valuable addition to our understanding of crime, but leave out much that is important. They tell us the race of the perpetrator only for the total of all hate crimes, including those motivated by religion, ethnicity, sexuality, and disability, as well as race. Therefore, it is impossible to break out the racial makeup of victims and perpetrators in specifically race-motivated hate crimes. Nor does the report include finer data on perpetrators and victims of violent versus non-violent hate crimes. Finally, like so many other US crime reports, the BJS study breaks out Hispanics from whites only when they are victims and not when they are perpetrators. Because Hispanics commit virtually all crimes at higher rates than whites, lumping Hispanic perpetrators in with whites artificially inflates the “white” hate crime rate.

The new BJS report has not garnered anything like the press attention the FBI report gets every year. This is hardly surprising. The purveyors of anti-white racial propaganda have little interest in the facts.