Europe  is “underestimating” the scale and severity of the migration crisis and “millions of Africans” will flood the continent in the next five years unless urgent action is taken, a senior European official has warned.

The dire prediction from Antonio Tajani, president of the European Parliament, came as Paris evacuated almost 3,000 migrants sleeping rough from a makeshift camp near the city centre – the 34th such evacuation in two years.

In an interview with Il Messagero newspaper, Mr Tajani said there would be an exodus “of biblical proportions that would be impossible to stop if we don’t confront the problem now”.

“Population growth, climate change, desertification, wars, famine in Somalia and Sudan. These are the factors that are forcing people to leave.

“When people lose hope, they risk crossing the Sahara and the Mediterranean because it is worse to stay at home, where they run enormous risks. If we don’t confront this soon, we will find ourselves with millions of people on our doorstep within five years.

“Today we are trying to solve a problem of a few thousand people, but we need to have a strategy for millions of people.”

The only solution is massive investment in Africa to dissuade people from leaving in the first place, he said. 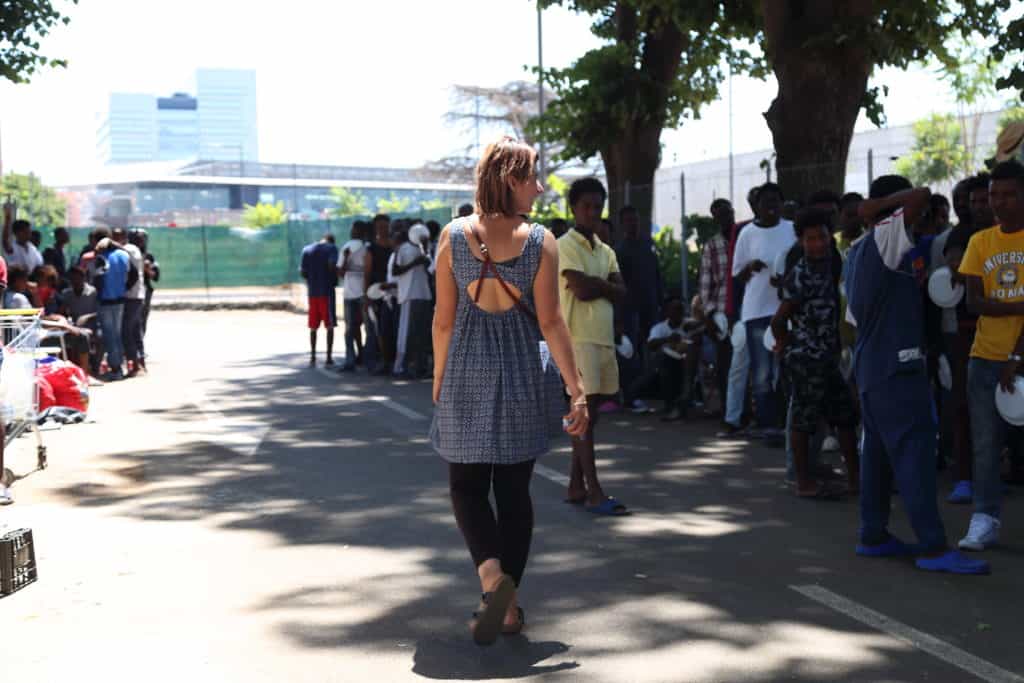 Mr Tajani’s sombre forecast came a day after EU interior ministers pledged to back an urgent European Commission plan to help Italy, which has accepted around 85,000 of the 100,000 migrants who have arrived by sea from North Africa this year.

Last month it threatened to close its ports to NGO boats carrying rescued migrants and called on some of the vessels to be sent to ports in France and Spain – a proposal these countries dismissed.

The effects of the migrant influx have been felt in Paris, where a makeshift camp of almost 3,000 people was dismantled yesterday morning, with migrants bussed to temporary accommodation in and around the French capital.

The migrants, whose numbers have swollen since the notorious Calais “jungle” was shut last October, had been living around an aid centre in the Porte de la Chapelle area. Set up last November to accommodate 400 people, it soon became swamped by the 200-odd weekly newcomers forced to sleep rough.

Their ballooning numbers raised security and hygiene concerns and caused tensions with locals.

President Emmanuel Macron’s government is expected to announce new measures to cope with the migrant crisis next week.

Jumping the gun, Anne Hidalgo, Paris’ Socialist mayor, issued her own proposals yesterday. These included an “organised spread” of migrants around the country to avoid bottlenecks, increasing the capacity of welcome centres from 50,000 to 75,000 by 2022, and pumping more funds into language and “civic” lessons. Most migrants landing in Italy are sub-Saharan Africans who have crossed the Mediterranean from Libya, a journey that has so far claimed more than 2,200 lives this year, according to UN figures.

Their influx has exacerbated tensions with neighbouring Austria, which this week deployed armoured vehicles close to its border with Italy and threatened to send up to 750 soldiers to block any migrants trying to head north.

EU ministers agreed to an “action plan” to provide up €35 million in aid for Rome and beef up the Libyan coastguard, which NGOs accuse of serious rights abuses and even collusion with people traffickers.

Amnesty said it was “deeply problematic” to unconditionally fund and train Libya, which has been teetering on lawlessness since former dictator Mummer Gaddafi was ousted and killed after a Nato-led operation in 2011.

At a separate conference in Rome on Thursday, Italy’s foreign minister Angelino Alfano stressed with a string of African and EU ministers the importance of bolstering Libya’s southern borders to end what he called “the biggest criminal travel agency in history”.