The Case of Rosa Parks 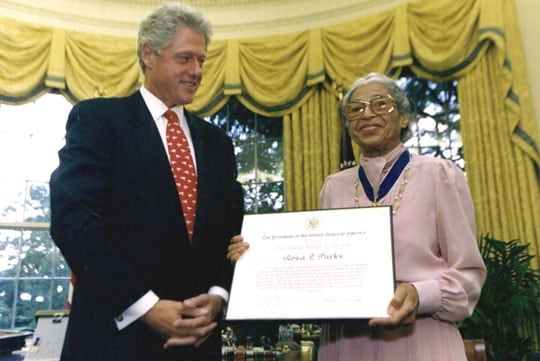 A curious state of madness descended on the country on October 24, and began to dissipate only by the first week of November. Americans lavished the praise and honor reserved only for supreme heroes on a woman whose sole achievement was to refuse to give up her seat on a bus.

From the moment Rosa Parks died at the age of 92, until she was buried nine days later, virtually every politician and organ of the media competed to see who could heap the most praise on a woman invariably referred to as a “civil rights icon.” She became only the 30th person — and the first woman — to lie in state in the Capitol rotunda, where President George W. Bush laid a wreath. Her casket was accompanied by a military honor guard for memorial services in Washington, before she was buried on November 2 in a seven-hour funeral in Detroit. The President ordered that all flags over federal buildings and bases fly at half mast. It was an astonishing tribute to a woman whose lifetime of achievement began and ended in one afternoon.

The myth that has grown up around Rosa Parks is of an exhausted Birmingham seamstress who, in 1955, was too tired to give up her seat and move to the colored section so a white man could sit down. According to the myth, this spontaneous act sparked the Montgomery bus boycott and launched the civil rights movement. In the miles of column inches that greeted the news of her death, there were only hints of what really happened.

In fact, Parks’s decision to keep her seat was carefully planned by the NAACP, for which she had worked for 10 years as a secretary. Her arrest did help start the bus boycott, but she played no role in organizing it. And though the boycott has gone down in folklore as a great blow for freedom, it did not even succeed; it was a court order that integrated Birmingham’s buses.

Several black women had already done exactly what Parks later did. They were arrested and charged with minor infractions. Parks’s best known predecessor was Claudette Colvin, a 15-year-old high school student who refused to give up her seat on March 2, 1955. She was arrested and taken off the bus kicking and screaming. Police say she was screaming obscenities; she later claimed she was screaming that her constitutional rights were being violated. Not even Miss Colvin’s case was the spontaneous act for which Parks is now generally remembered. The girl had been active in the NAACP Youth Council, and had even discussed strategy with Rosa Parks herself.

The NAACP considered basing a desegregation case on the basis of Miss Colvin’s arrest but soon decided she was not an attractive plaintiff. She was dark, and many blacks wanted a lighter-skinned spokesman. The NAACP also learned she was several months pregnant by a married man, and discovered her habit of breaking out in volleys of curses. This was not a girl conservative black church-goers would support.

As E.D. Nixon, then a leader of the Montgomery chapter of the NAACP, explained years later, “I had to be sure that I had somebody I could win with.” Rosa Parks was far more promising: “morally clean, reliable, nobody had nothing on her.”

The NAACP had been planning a bus boycott for years, and was waiting only for the right person to act as figurehead. Far from being an accidental hero, Parks was carefully groomed for her role. A white integrationist, Virginia Durr, had paid for Parks to attend civil rights strategy seminars at the Highlander Folk School in Tennessee. The school, known to be rife with Communist sympathizers, was under FBI surveillance.

Moreover, Parks’s role was strictly limited: keep her seat and hold her tongue. Others swung into action immediately to organize the boycott. The very day she was arrested — it was a Thursday — an English professor at all-black Alabama State College named Jo Ann Robinson stayed up all night mimeographing 35,000 leaflets calling for a one-day bus boycott the following Monday. On Friday, she and her students secretly leafleted elementary and high schools. As part of a coordinated effort, Montgomery’s black preachers met and agreed to endorse the Monday boycott from their pulpits, and to hold a mass meeting Monday night at Holt Street Baptist Church to assess the results. That evening, after a surprisingly successful boycott, thousands of blacks crowded into and around the church to hear 26-year-old Martin Luther King give his first public speech. The boycott lasted for more than a year, with both the blacks and the bus company more stubborn than anyone had expected. Blacks organized carpools that even the Citizens Council had to admit operated with “military precision.” Parks played no role in any of this.

It was not the boycott that eventually brought integration, but a court case — and one in which Rosa Parks was not even a plaintiff. In Browder v. Gayle — one of the four plaintiffs was foul-mouthed Claudette Colvin — a three-panel district court in Birmingham ruled on June 5, 1956 that segregated buses were as much a violation of the 14th Amendment as segregated schools. The Supreme Court upheld the decision in December. Then, and only then, did Montgomery agree to integrate its buses.

It can be argued, therefore, that the boycott was both a failure and unnecessary. Rosa Parks was a catalyst in organizing what turned into an impressive demonstration of black solidarity, but virtually anyone presentable would have served equally well. Rosa Parks did not risk death. She did not face fire hoses or police dogs. She did not even face humiliation. She knew very well that if she was polite and cooperated with the police she would be treated courteously. She also knew that the NAACP and her white friends would immediately bail her out of jail.

It is impossible, even by the most sympathetic reading, to see Rosa Parks as anything but an unimportant actor in a drama that was not even necessary. Not once, in the intervening 50 years, did she do anything of the slightest importance. Black congressman John Conyers gave her a job in his Detroit office, apparently more out of courtesy than because of her abilities. As she grew older, she mismanaged her finances, and depended on a local church to pay her rent. Eventually, her landlord simply stopped charging.

Rosa Parks has dined out — and become a hero of American history — on the basis of a single half hour of immobility. Surely, never in the history of the world, has so small an act won such praise.

The last few years have been building up to the extraordinary excesses we have just witnessed. In 1996, President William Clinton presented Parks with the Presidential Medal of Freedom, and in 1999, Congress voted her its Gold Medal. These, too, are exalted honors.

Blacks are not likely to complain if whites make a demigod of an unimportant woman, but why do whites bow their heads before such transparent fraud? There is no satisfactory answer. Americans are never happier than when glorifying non-whites who have denounced the alleged sins of whites. The adulation of Rosa Parks is just another chapter in the lemming-like rush to destruction whites everywhere appear to have joined. If a still-majority-white Congress and Senate can vote by acclamation to make Rosa Parks the first woman to lie in state in the rotunda, any act of racial self-mortification is possible.

Jared Taylor is the editor of American Renaissance and the author of Paved With Good Intentions, White Identity, and If We Do Nothing.
< Growing Up Is Even Harder When Mom Is in Prison
Sikh Policemen to Get Bulletproof Turbans So They Can Join Firearms Units >