Teaching Them to Hate US

In 2010, Los Angeles got a new school, the Robert F. Kennedy K-12 Learning Center. Built on the site of the old Ambassador Hotel in Los Angeles where Kennedy was assassinated in 1968, the school’s website notes that “the school was built to relieve underperforming and overcrowded schools located in the historically underserved neighborhoods of Pico-Union and Koreatown.”

At the school’s dedication, Robert Kennedy’s son, Maxwell Kennedy, proclaimed that “this new K-12 learning center will educate and empower our young people and their parents to fight for economic and social justice.”

Today, almost the entire Los Angeles Unified School District (LAUSD) has been turned into a series of “schools of social justice” based on the premise that the United States is a racist, oppressive nation that benefits whites at the expense non-whites. Today’s textbooks make that very clear.

During the first half of the 20th century, public-school textbooks instilled such values as patriotism and honesty, and honored our laws and language. Children of immigrants assimilated by learning about America’s ethics, standards, and codes of behavior.

Selections from a seventh-grade reader of the 1940s, Readings in Literature, promoted pride in America and made sure the next generation shared the culture of its ancestors. Here are the first four selections:

What is it to be An American? by Henry Cabot Lodge

Stand by Your Country, by Edward Everett Hale

The Morning of the Revolution, by George William Curtis The next selection is a hymn. I cannot imagine any of these readings in a modern-day anthology. Selections from the “This Land We Love” category in the collection include Paul Revere’s Ride by Henry Wadsworth Longfellow, Grandmother’s Story of Bunker-Hill Battle by Oliver Wendell Holmes, and America for Me by Henry van Dyke. The “Heroes and Heroines of Yesterday and Today” category includes “On the Oregon Trail,” from Ox-Team Days on the Oregon Trail, “The Landing of the Pilgrim Fathers,” by Felicia Dorothea Hemans, “Lindbergh,” from The Book of Courage and “The Hoodoo” from The Boy Scouts Year Book of Ghost and Mystery Stories.

Another popular California-state textbook from the first half of the 20th Century was Good Reading for High Schools –Adventure. The editors suggested that selections be read aloud, “for only when he so reads them will a pupil realize the beauty of these types of literature.” I cannot fathom, in today’s oppressive PC climate, reading aloud Robert E. Lee’s, Farewell, found in the “Oration” section, but the editors suggest that this is how a student will “realize the full beauty of its well-rounded sentences.” They also call this a good passage to “commit to memory.”

In the mid ’60s, textbooks like these were exiled to the LAUSD book depository, located in a run-down industrial area near downtown. Thousands of old textbooks moldered there for decades, each one marked “discard,” but were available to teachers who wanted to use them to supplement lessons.

In the late ’70s, after years of white flight due to forced busing and massive immigration from Mexico and Central America, the LAUSD student body became predominantly Hispanic, with a drop-out rate of approximately 60 percent. When asked, Hispanics and other students “of color” said they didn’t like school because they didn’t see anyone in their school textbooks who looked like them or represented their culture.

The LAUSD then adopted “multicultural” textbooks full of lessons about “people of color,” and put the mostly white teaching staff though hours of “professional development” to raise their “sensitivity level and awareness.”

The new textbooks depict a white-dominant America that is inherently oppressive. Non-whites are noble victims, struggling against an “institutionally racist” system that tries to keep them ignorant and poor. Brutal whites cling to a world that has passed them by.

One of these new mandated textbooks, called Perspectives in Multicultural Literature, comes in two volumes. Here students can read Gloria Allred and Lisa Bloom’s, If Decency Doesn’t, Law Should Make us Good Samaritans, which favors legal punishment for “turning our backs on someone in desperate need.” There is also a speech by former President Bill Clinton to a black congregation called “Remarks to the Convocation of the Church of Christ in God,” which argues for gun control, passage of the Brady Bill, and more spending in decrepit inner cities. Cesar Chavez is included with a speech called, “What the Future Holds for Farm Workers and Hispanics,” in which he says:

Today, thousands of farm workers live under savage conditions, beneath trees and amid garbage and human excrement, near tomato fields in San Diego County, tomato fields which use the most modern farm technology. Vicious rats gnaw on them as they sleep. They walk miles to buy food at inflated prices. 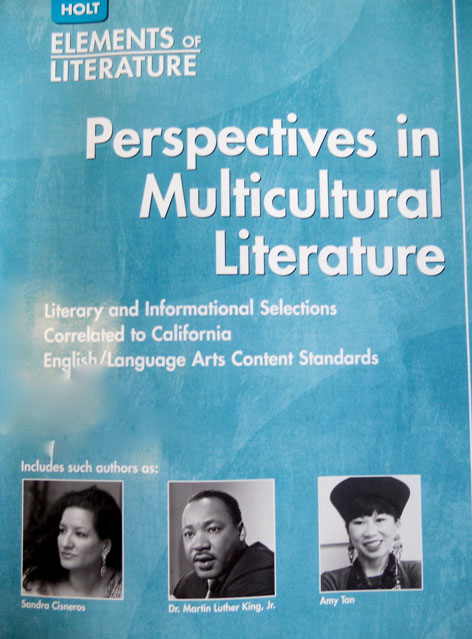 Other readings include: “Coming of Age, Latino Style,” “Interview with Nikki Giovanni,” and “Straw into Gold” by Sandra Cisneros. In case you never heard of her, the book says she is a “Chicana” writer “from a working-class Mexican American background who found little opportunity to read or hear about people like herself.”

Scholastic Scope is a monthly magazine published by Scholastic, Inc. and widely used in Language Arts classes. It consistently pushes the message of “persons of color” fighting for dignity against a “racist, sexist American culture.”

The main feature of the January, 2008, issue is American Pastime, a readers’ theater drama about the relocation of Japanese-Americans during the Second World War.

The play begins with a description of the setting:

In one scene, whites beat an innocent Japanese-American as they yell, “Why don’t you go back where you came from!” In another scene, a vicious white wrenches the arm of an aspiring Japanese-American baseball player, dashing his hopes for a college sports scholarship.

There is, of course, a sub-plot about a forbidden inter-racial romance between a Japanese camp resident and the daughter of the racist white sergeant who runs the camp. The daughter defies her furious father and promises to go off to college with the Japanese boy after the war is over.

After they have read the play, students are invited to discuss why it is important to be reminded of historical events like the Japanese relocation.

The February 2012 issue of Scholastic Scope included an article about the integration of Little Rock High School in 1957 called “When School was Scary.” The article comes with the famous photograph of Elizabeth Eckford entering the school, followed by a crowd of angry whites. This is the caption under the picture: “A crowd of people shouted, ‘We don’t want you here!’ ‘Don’t Let her In!’ One girl’s face twisted into pure hatred: ‘Go back to Africa!’ she screamed.”

The main feature of a 2008 issue of Scholastic Action (a dummy version of Scholastic Scope for “struggling” high-school age readers) is an excerpt from The Express, a biography of a black football player named Ernie Davis. The front cover of the magazine asks:  “Can a young football star win his fight against racism?” Inside, Ernie is described as “a star athlete who never gave up on the field — or in his fight against racism.”

Here is how the excerpt begins. Note the simple-minded language, which is a far cry from the Robert E. Lee’s “well-rounded sentences”:

It’s 1949 in Uniontown Pennsylvania.  Ten-year-old Ernie Davis and his cousin walk along a set of train tracks. They laugh and sing as they collect empty bottles to earn money. Suddenly they see a gang of white boys who exclaim, ‘What are you doing here? This ain’t your side of town!

Later, when he becomes a star college football player for Syracuse University, racist referees call him out of bounds unfairly, and bigoted hotel employees tell him to “stay off the elevators” and send him to a room down a dark hall in the basement.

This is the sort of thing children read every day in LAUSD classrooms. Gone are old fashioned notions of uniting students in a shared American heritage. Instead, students get an education that could not be better designed to make non-whites hate America and hate white people.

And has this massive effort to make sure non-whites see themselves in their textbooks narrowed the achievement gap? Here are the reading scores over the last 28 years on the National Assessment of Educational Progress (NAEP): Whites and Asians still consistently outperform blacks and Hispanics. In fact, the average black or Hispanic 17-year-old performs at about the same level as the average white or Asian 13-year-old. The new-fangled methods are a great success at teaching just one thing: resentment.

Several years ago, we got orders to get rid of all pre-1980 textbooks. We also heard that the book depository had been shuttered, so the books were simply to be destroyed. Closing the depository was said to be a cost-saving measure, but a few teachers like me wondered if it wasn’t also an excuse to wipe out the hated past.

Of course, I kept my old textbooks and treasure them. They reflect an America that no longer exists, an America that is officially racist, sexist and homophobic, and that is being replaced with one devoted to victimhood and “social justice.”

Mary Morrison has been teaching in Los Angeles schools for more than 20 years.
< Obama Frees 8 States from ‘No Child’ Education-Testing Rules
Thousands of Illegal Immigrants Are Being Freed ‘To Safeguard Their Human Rights’ >
Blog
Commentary
Videos
Podcasts
Follow us