Written in 2010 and Unfortunately Still Up to Date

Race and racism are everywhere. Hardly a day passes without charges of racism. Usually, invoking what James Edwards calls the “R” word is enough to make the accused bow down and apologize. No trial needed.

But, as Mr. Edwards notes, “most white people have no idea when they hear or see the word ‘racist’ in the media that the people using the word mean something far different from what the ordinary person understands the word to mean.” Unfortunately, this book is even more relevant today than when it was written 10 years ago. 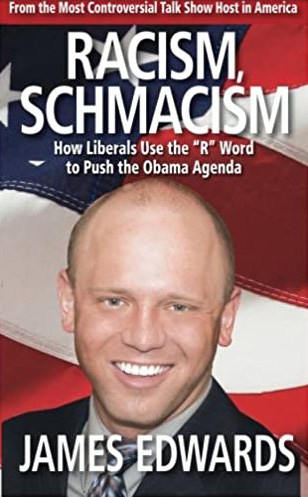 Since the death of George Floyd last spring, persecution of thought criminals has intensified. Examples that Mr. Edwards highlighted have become the norm.

In 2010, white conservatives were de facto racists; now all whites are racists. If we are to listen to the media today, the whole “system” is fueled by racism, the main engine of Western society. No one is innocent, and the United States is more racist than ever.

President Obama changed nothing. As Mr. Edwards writes, people “were certain that with a black man in the White House, charges of racism and hate would begin dying down, and that race would become a smaller and smaller factor in American life from here on out.” Wrong. Every “conversation on race” has become a harangue; one side says whatever it wants, while the other side listens and nods.

Mr. Obama’s election illuminated certain trends: “Humor and satire that have been acceptable for centuries when directed at white politicians become ‘hate’ and ‘racism’ when the target is a black . . . .” This is why comparing George Bush to Curious George was funny, but comparing Obama to the same character was shocking.

Fear of the “R” word explain why John McCain waged such a mild campaign. He never attacked his opponent for spending 20 years as a member of Trinity United Church of Christ, where pastor Jeremiah Wright preached, “No, no, no, not God Bless America. God damn America.” Despite his restraint, McCain still got the “R” word lobbed at him.

It soon became clear that voting against Mr. Obama or judging him on his programs or achievements was racist. Whites were supposed to look beyond his color but also to show their lack of racism by voting for him, but it was natural for blacks to vote for him out of racial solidarity.

Mainstream conservatives fail to understand this double standard, and continue to play the game according to rules set by their opponents; conservatives throw around the “R” word, too. This is why Mr. Edwards finds the Democrats more respectable in a certain way:

Say what you want about . . . the Democrats, but at least they’re loyal to their voter base. Unlike the GOP, which would never do anything to advance the cause of their white base, Democrats take every opportunity to reward the non-whites who vote for them. They understand how politics works; if you want people to keep voting for you, you reward them when they support you.

At least one person got Mr. Edwards’ message: Donald Trump. Even if he was not clearly pro-white, he did not openly betray his white supporters, which is why he has been under constant attack since 2016. And he refused to bow down when the Liberals threw the “R” word at him. This refusal to cower is what Mr. Edwards was recommending 10 years ago, and in 2016, Mr. Trump won election. It took guts to refuse the guilt game in politics. We have yet to see anyone in the mainstream media or at a university show the same courage.

It is seldom stated this bluntly, but anything whites do can be racist. It was racist for whites to move out as neighborhoods became “diverse,” but it is now racist for them to move back. Similarly, we are told that movies and television are racist because there are not enough blacks onscreen and that those who are, are made into negative stereotypes. Anyone who has watched an hour of television knows that’s not true. For those who haven’t, Mr. Edwards cites countless examples of the exact opposite.

If we are forced to support certain ideas and never dissent, it raises questions about free speech. The government of my country, Canada, has already passed hate speech laws. The United States does not yet have official censorship, but social media do the censoring and antifa intimidate dissidents.

As Mr. Edwards points out, the problem is that although “white people aren’t filled with hate and ‘racism,’ they are scared to death of being ‘perceived’ as a racist, or getting called one, because ‘racist’ has become the most powerful racial slur in America.”

Mr. Edwards urges us to stop playing that game. Stop apologizing and stop trying to prove we are not racist. We can free ourselves only by refusing to bow down.