Why I Would Vote for Donald Trump if I Were American

Editor’s note: Neither American Renaissance nor its parent organization, New Century Foundation, endorse candidates for political office. We publish a variety of opinions that do not necessarily reflect our own.

I write from central Europe, and like racially conscious whites everywhere, I closely follow your elections. Despite its declining economic and political power, the United States is still a mighty source of popular culture and ideology, almost all of it poisonous. Your choice on November 3 will resonate across my continent and throughout the world.

It’s my view that you must vote for Donald J. Trump — despite his flaws and with your eyes open. You must recognize that although he has disappointed you in many ways, you must not dismiss his accomplishments. And you must not overlook his great inadvertent achievement: He has forced your opponents to show their true selves. He has unmasked the deep state and driven the media to an unprecedented level of fury and open contempt for whites. This has opened the eyes of whites, not just in your countries but in Europe.

President Trump did things no other Republican would have done. He eliminated critical-race-theory workshops in the federal government. He abolished the Obama Administration’s sabotage of school discipline. He “saved the suburbs” by ending Barack Obama’s forced integration schemes. He sharply cut legal immigration and refugee resettlement. He built new defenses on the border. A substantial part of his travel ban survived court challenges. He made a strong effort to bar immigrants who could become a “public charge.” He acted on fair trade. He did not bring home nearly enough soldiers, but he didn’t start any new wars.

I know that in many ways, President Trump was a disappointment to you. He failed to back policies that would have been popular. Ending birthright citizenship would have been a hard slog, but he should have tried while he still had both houses in Congress. A tax on remittances to pay for the wall and making English the official language would have been easier. President Trump did nothing effective to stop internet censorship, and that is one reason he is losing support. He wasted power in 2017–2018 passing a tax cut any GOP President would have signed, and by attacking Obamacare — even though he had no real health plan. Medical care doomed Republicans in 2018 and may do so again in 2020.

Aside from some action on trade, the Trump Administration did not reward working-class whites. Instead, apparently at Jared Kushner’s urging, it offered blacks a $500 billion “Platinum Plan” reportedly built with advice from Ice “F*ck the Police” Cube. Last week, he released an “American Dream Plan” for Hispanics.

Under the Trump Administration, journalists, Big Tech, and law enforcement cooperated to deplatform, selectively prosecute, and sometimes jail white advocates. Powerful NGOs such as the Anti-Defamation League worked with Democrat politicians to suppress dissent while  Republicans were mostly silent. The fantasies of your media notwithstanding, it is clear to us even in Europe that the Alt Right is dead, and that white advocacy has no influence in this administration.

President Trump’s real importance is therefore less in what he did than in what he made others do. He forced the System to reveal itself. Most media outlets are now openly biased, with no pretense of journalistic integrity. President Trump prompted unprecedented antifa violence. The whole country now knows who they are, and Americans don’t like them. President Trump revealed what you call the “Deep State.” Many Americans now disbelieve the media and doubt institutions such as the FBI, CIA, and even the Pentagon. These are all victories for you.

Although Europeans remain ignorant of it, even the concept of “Anarcho-tyranny” is beginning to appear in your mainstream. A strong Dissident Right is emerging despite all efforts to suppress it. Figures such as Nick Fuentes, Michelle Malkin, Scott Greer, and others have become important, and the force they have built will endure even if President Trump is defeated.

There are still major obstacles to white advocacy. American whites are like Abbe Sieyès’s Third Estate: You sustain your country, but politically you are nothing. No mainstream politician appeals to you as whites, and none will until you either earn a place in the GOP coalition or create your own political force.

While President Trump has slowed immigration, he has not stopped or reversed it. You are still hurtling toward minority status in your own country. At the same time, to the astonishment of European Identitarians, ever since the death of George Floyd, the cultural revolution against your people has reached a new level of hysteria. From overseas, some of us wonder why American patriots “back the blue,” even when the police ignore rioters and looters, and the FBI considers “domestic violent extremists” — meaning people like you — at least as dangerous as foreign or Islamic terrorism.

Even worse for us overseas, your elites support an international, structurally liberal system that hurts whites everywhere. The so-called “Open Society” has influence far beyond your borders. Your biased but cleverly plotted movies and television programs are now seen in every part of the world and help explain why there are Black Lives Matter protests from the United Kingdom to South Korea. Your State Department — President Trump’s State Department — funded opposition to the Hungarian government. When even a Republican government opposes healthy European nationalism, can you not imagine what we fear from Democrats?

Will this change after November? It may, if President Trump wins. He could become even bolder in his contempt for the media and elite opinion, and might express himself in increasingly identitarian terms.

Of course, a vote for Donald Trump on Tuesday does not mean you support him unconditionally. You must not let him pass an amnesty for “dreamers,” and certainly not for other illegal immigrants. You stopped George W. Bush and you can stop President Trump. At the same time, a second Trump administration should offer opportunities.

It would mean national populism becomes a powerful and probably permanent faction within the GOP. It would be much harder for what you call Conservatism, Inc. to resurrect slogans about “free trade” and “limited government.” Critical race theory would be rooted out of the bureaucracy and maybe even from all organizations that get federal money, including universities. The GOP would have a better chance of regulating Big Tech if President Trump wins, and this is a vitally important issue for you now. Your Dissident Right would be stronger and more credible, and this would encourage white advocates all around the world.

A second Donald Trump victory might split the Democrat coalition. Surely, Democratic Socialists would not mourn a Joe Biden defeat if it paved the way for candidates like Alexandria Ocasio-Cortez and Ilhan Omar. Countering such a force from the Right could make it easier for you to build an independent political force.

American conservatives will not suddenly “wake up” under a Biden/Harris Administration, but they will surely respond to the riots, protests, and violence leftists will unleash if Donald Trump wins. This will be an unmistakable sign that the “threat to Democracy” the media wail about comes from the Left, not the Right. Re-electing the incumbent would mean more instability. This would make the lines of conflict even more blindingly clear, whereas President Joe Biden might try to paper them over with platitudes.

Trump supporters want strong action against the NGOs, bureaucrats, and journalists who hold so much power. Ironically, you could be freer with a strong executive, and in a second term, President Trump might be more willing to use power. Isn’t this the hope expressed by unofficial campaign flags that say “Trump 2020: No More Bulls**t”? 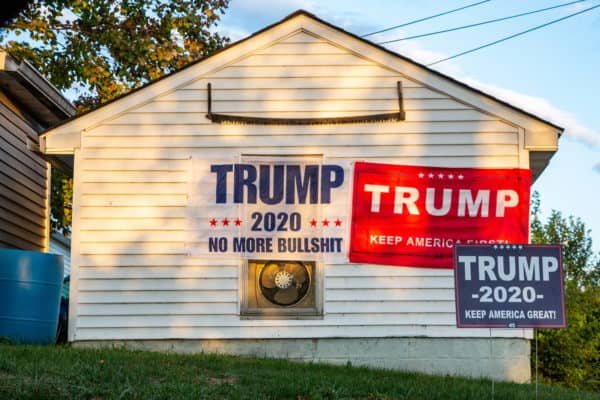 Whites will not suddenly mobilize under a Biden administration, but it would force you into creating the institutions you need. Your federal system means you have choices Europeans do not. Under Biden/Harris, some localities are likely to pass truly intolerable laws on gun control, home schooling, public school curricula, racial preferences, abortion, public expression of religion, etc. that will encourage you to do something you should have done long ago: concentrate geographically and build power locally.

Whoever wins, whites must become a force in American politics. Unquestionably, this is more difficult for you Americans than for Europeans because of your two-party, first-past-the-post system, but until you can express yourselves politically, you will continue to be simultaneously taken for granted and reviled.

Do not forget: The United States has the largest single concentration of whites within any national territory. What you do matters tremendously for all whites everywhere. The whole world will see a Trump victory as, at the very least, a rejection of globalism, of elite opinion, and of multiculturalism. The Left will see it as a return to everything it hates: nationalism, tradition, sovereignty, and even white consciousness.

As it did in 2016, a small number of votes could tip the difference. Mr. Trump could lose with 63 million votes but win with 63.5 million. If he loses, no one will remember or care about those 63 million people. If a few more voters join them, they could push him to a victory of world-wide significance.

You American whites do not have many years left. Don’t forget: Neither do we.

View all posts by Günter Schulte

Günter Schulte is an Austrian living in Hungary. He worked for many years at Commerzbank AG/New York.
< French Terror Attacks Are a Stark Warning to US Voters
Biden/Harris Campaign Closes with Promise to Play Racial Robin Hood >
Blog
Commentary
Videos
Podcasts
Follow us