Are the Pilgrims the Next Racists? 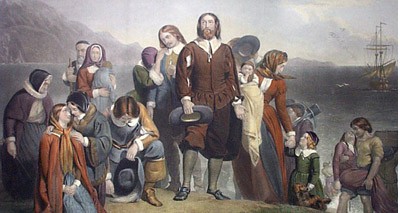 Thanks to the 1619 Project, “1619” is a graffiti tag vandals spray on Confederate monuments. We may see a new tag soon.

Plymouth Rock has 1620 carved into it, marking the year the Pilgrims arrived. On Presidents’ Day – yesterday — vandals sprayed red paint on Plymouth Rock and other memorials in Plymouth. but police say that the graffiti have no political meaning. Some say “508 MOF,” and 508 is a Massachusetts area code. It could be a local gang tag.

However, there’s also an obscene message directed at the police near the National Monument to the Forefathers at Plymouth. A local news organization said photographs of this “are not being published.”

Media also reported that there has been so much graffiti that Plymouth Town Manager Melissa Arrighi is “taking stock of just how many monuments have been vandalized.” She called it “sickening” and said the timing – November is the 400th anniversary of the Pilgrim Fathers’ landing — adds another layer of “disappointment and just real sadness.” There is a GoFundMe offering a reward for catching the vandals. Reporter Sharman Sacchetti said the community wants to clean up the monuments right away.

“Why would someone do this?” asked one observer. That’s easy to answer:

“We didn’t land on Plymouth Rock. The rock was landed on us.” Malcolm X

Yes it’s a piece of history, but the significance is different for some. Not condoning it, but it’s still in a lot better shape than the Native American sacred sites that were blown up for the damn wall.

“Did you hear that Plymouth Rock was just vandalized?”

“Oh, right, I keep forgetting that not everybody here shares my politics.”

This is still the minority view. Will it remain that way?

The New York Times reported one month ago that American Indian groups are “actively shaping the programming of events in the United States and Britain” that are planned for the 400th anniversary. One historian, a “member of the Wampanoag tribe who is on the advisory committee,” said she will “unravel the misconceptions that are put out there in history,” especially the “myth” that “Native Americans welcomed the Pilgrims.”

Thanksgiving is increasingly controversial. In a story about the Plymouth Rock vandalism, ABC reported that the “United American Indians of New England holds the solemn remembrance on every Thanksgiving Day since 1970” to bemoan what they call “the genocide of millions of native people, the theft of native lands and the relentless assault on native culture.”

Media pressure and academic campaigns could demonize the Pilgrims. It worked on Christopher Columbus. He used to be one of our top national heroes, but now monuments to him are routinely vandalized and even destroyed. Some cities are taking them down. “The city of Columbus, Ohio spent $95 million to celebrate the 500th anniversary of Christopher Columbus’s voyage to the New World in 1992,” wrote Paul Kersey. “In 2018, the city stopped observing the holiday altogether.”

Many government officials, academics, and journalists already prefer to celebrate “Indigenous Peoples’ Day.” The idea is that it would have been better if Europeans never came. The European discovery of the New World was a tragic event, and “Native Americans” are the only real Americans. (Alexandria Ocasio-Cortez, with slightly more plausibility than Elizabeth Warren, thinks her group – mestizos – are indigenous too.)

If the discovery was a tragedy, so was the Pilgrims’ arrival. Ultimately, leftists will target every white American hero, leader, or even mascot because they think we should not even be here.

Conservatives aren’t fighting back. When leftists began taking down Confederate memorials, National Review’s editor Rich Lowry supported them. He said Robert E. Lee fought for slavery and “betrayed the U.S. government.” This is pathetic. Many of the Founding Fathers were slaveholders, and all betrayed the Crown.

President Donald Trump opposed the campaign against Confederates and said that the Founding Fathers were next. He was right. George Washington’s church took down his memorial, a school named after him took down a mural, a Chicago pastor wants Washington (and Jackson) parks renamed. George Washington University created a “renaming” task force to look into whether buildings or landmarks have embarrassing names. They better rename the entire campus.

Thomas Jefferson gets harsher treatment. Some Hofstra students called Thomas Jefferson an “icon” of white supremacists. Jefferson’s alma mater, home, hometown and the college he built have all dishonored him. Every Fourth of July, leftists call the Declaration of Independence (and its reference to “merciless Indian savages”) racist. In Baltimore, vandals wrote “racist anthem” on a monument dedicated to Francis Scott Key. “The third stanza of Key’s poem includes a reference accusing the British of encouraging American slaves to join the fight against their masters,” reported The Baltimore Sun. (They did.)

One could argue that Christopher Columbus and the Founders were all tied to slavery, and thus uniquely offensive. Yet officials in Arcata, California, removed a statue of onetime Union officer President William McKinley, apparently because Indians once lived in the Arcata area. They replaced McKinley with information about the “region’s indigenous history.” The Lincoln Memorial was vandalized in August 2017. Though the message was unreadable, it occurred just days after the ill-fated Unite The Right rally.

The graffiti on the Lincoln Memorial, the Jefferson statue at William & Mary, and the graffiti on the Key memorial all used red paint. It’s unknown whether the vandals at Plymouth Rock attached any significance to the color, but it often means that white pioneers had “blood on their hands.”

No monument or commemoration tied to the historic American nation is safe from attack. This is about race, not partisanship or ideology. In June 2015, National Review’s Kevin Williamson predicted that Democrats would never cancel their Jefferson-Jackson Day dinners because their “selective” concern about “racist totems” was strictly partisan. He said we had reached “peak leftism.” A statue of Confederate President Jefferson Davis being removed from the University of Texas at Austin’s campus in 2015.

One month later, Democrats started dropping Jefferson-Jackson Day dinners. We have not reached peak leftism. We never will. Leftism is defined by the quest for equality, which is an impossible goal. Rather than admit this, leftists invent enemies and concepts to explain their failure, much as the Soviet Union blamed the disastrous consequences of central planning on “saboteurs” or “wreckers.” The less “white privilege” actually exists, the more it’s invoked to explain why test scores and crime rates remain unequal. The less racism there is, the more people crusade against racism. We’re fighting a faith, not a rational worldview.

We don’t know if the vandalism in Plymouth was political, other than being anti-police. It’s clear that the town and most Americans are disgusted at the desecration, but that could easily change.

A few media and academic campaigns could get many Americans thinking differently. What happened to Columbus could happen to the Pilgrims. Let’s keep our eyes open for a “1620 Project” telling us the Mayflower should have never sailed.

Mr. Hood is a staff writer for American Renaissance. He has been active in conservative groups in the US. You can follow him on Gab.
< Twitter Hate: Black History Month Edition
Passengers Begin Leaving Quarantined Ship >
Blog
Commentary
Videos
Podcasts
Follow us