Ever wondered which Latin American countries have blacks, which have a lot of blood, and which have both? Now you have all those answers in one place, here — complete with maps and data tables.

Map of states of Mexico: The data above come from: Francisco Mauro Salzano and Mónica Sans, “Interethnic admixture and the evolution of Latin American populations,” Genetics and Molecular Biology, 37 (1 Suppl), pp. 151-170; March 2014. This paper will be cited throughout this essay as “IAELAP.”

Mexico’s black population is almost entirely in the southern states of Guerrero, Oaxaca and Veracruz; and higher than average rates of black admixture are usually found in other southern states. However, there is another racial group in Guatemala that needs to be taken into account: the Garifuna. This is a hybrid race found in the Caribbean and some countries with coasts along the Caribbean that are a mix of black Africans and local Amerindians, especially Arawak tribes. Genetic studies, and a glance at the photo above, suggest that the Garifuna are more black than anything else. One study that specifically focused on Guatemalan Garifuna found their average admixture to be: 70 percent black, 29 percent Amerindian and 1 percent white.

About 40 percent of Guatemalans are pure Amerindians, and genetic studies have found that this population has no black blood. The other 60 percent, however, have between four and nine percent black admixture.

As the World Population Review puts it, “This is the only Central American country without a visible African population due to racial intermixing during its colonial days.”

Studies of this country are hard to come by, but the average share of black blood appears to be around 9.7 percent.

The two different analyses of Nicaragua I was able to find both suggest the black admixture of Nicaraguans is significantly higher than that of its northern neighbors, with one putting the average at 20 percent, and the other at 16.29 percent. The average of the two would be 18.15.

Unfortunately, no serious examinations of the admixture of the general population can be found.

The nationwide average appears to be around 9 percent black. With lower averages in the central region (4 percent) and higher averages (13-14 percent) in the coastal areas.

Panamanians appear to be the blackest people of Central America — with their average share of black blood being 24 percent. Colombia may well be the most mixed country in the world — certainly in Latin America. Coming up with a useful “average” composition of the population is simply impossible. Take a look at the data in this table, or those below, for yourself. You can find a more detailed examination of the data above here. Suffice it to say that any country hoping to limit black genetic influence should not let in Colombians.

Once again, the numbers vary somewhat. The CIA World Factbook  has the total black population listed as 7.2, broken down into three groups: Afroecuadorian (4.3 percent), mulatto (1.9 percent), and black (1 percent). The World Atlas and World Population Review both simply list “African-Ecuadorians” as one group, at 7 percent, with the latter having an ambiguous “other” category at 1 percent — while the CIA has it at just 0.4 percent.

Ecuadorians — average 8 to 12 percent black blood. I suspect the country’s Amerindians have no black blood, or nearly none, while its whites likely have as much or less — but certainly not greater — black blood as the average.

Peru’s average amount of black blood is low, varying from 1 to 3 percent across the country, as you can see below, and here as well. Percentage of total population: One

As with Honduras, thorough genetic studies of Bolivia cannot be found.

The blacks in Chile today have almost all arrived from elsewhere in the Western Hemisphere in the last ten years, such as Peru, Colombia, Venezuela, and especially Haiti.

About half of Chileans have black blood, averaging between one and six percent admixture.

Aside from a few outlier regions, Argentines have little black blood, normally under five percent. 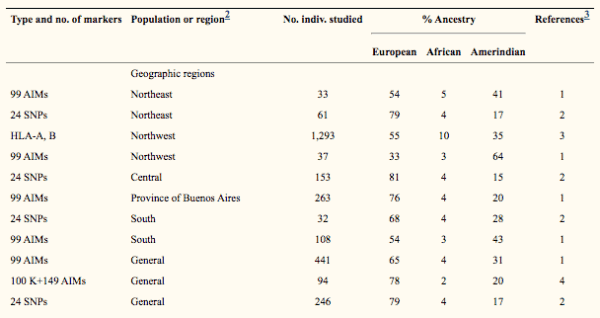 Black heritage in Uruguay is similar to Chile and Argentina, with an average of about five percent.

Percentage of total population: 1 or less.

As with Honduras and Bolivia, thorough genetic studies of Paraguay cannot be found.

Like its neighbor Colombia, Venezuela is incredibly mixed. The World Atlas makes note of the fact that 51.6 percent of its population is “mestizo” — and that 28.5 percent of mestizos “possess African characteristics.” That would mean another 4,660,210 Venezuelans with significant amounts of black blood, a demographic sometimes called “Afro-descended.” If they are added to the total black population, the breakdown becomes:

As with its neighbor Colombia, Venezuela is so mixed it is hard to come up with a meaningful number for average admixture. Non-black Cubans vary quite a bit in black ancestry, between 10 and 25 percent black.

Numbers for this country are tricky because of its stigma about identifying as “black” — a product of their rivalry with Haiti. The CIA World Factbook lists the black populations this way: 58 percent indio [a local euphemism for “part black”], 12.4 percent mulatto, and 15.8 percent black — making the “Afro-descended” total 86.2 percent. The World Population Review and World Atlas put the black population at 11 percent and the “mixed” population [a euphemism for “part black”] at 73 percent; totaling the “Afro-descended” population at 84 percent.

In the Caribbean, and Latin America more generally, if you are not classified as “black,” you have no more that 20 – 25 percent black ancestry. The ~16 percent of Dominicans classified as “white” are likely as varied as those of Cuba. 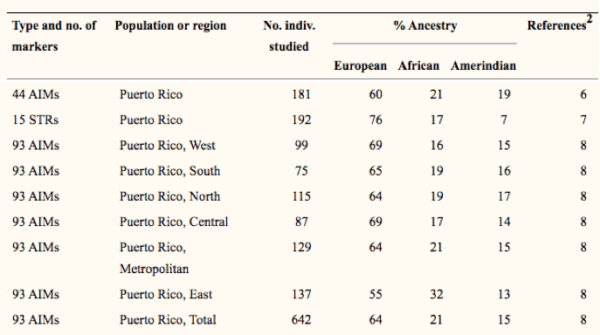 Blacks in the non-Hispanic New World

The number of blacks in Latin America is higher than many people think, however, it is the countries that do not speak Spanish that are the Western Hemisphere’s African outposts. Almost all of them are super-majority black — especially those in the Caribbean.

The various small islands throughout the Caribbean that are still controlled by European states or America (e.g. The Virgin Islands, Guadeloupe, etc.) have similar demographic profiles.

Countries outside of, or on the periphery of, the Caribbean Sea are less black, but all still have black populations higher than America’s (per capita).

Finally, the small central American country Belize is as much of a genetic jumble than Colombia and Venezuela. Suffice it to say that there is plenty of black blood in the mix. Genetically speaking, the islands of the Caribbean Sea are today an outpost of sub-Saharan Africa. This outpost has beachheads along southern Central America’s sea line (Mexico’s blackest states are in its southeast) and South America’s northern littoral and into the Amazon jungle, as most of Brazil’s blacks are concentrated in its north. The largest white pocket in all of this is some seven million Cubans, who, to expand on the analogy, are like the 4.5 million whites in South Africa.

The Third World to America’s south does not represent merely a “brown threat,” but a black one as well. Though the majority of Hispanics in the United States are Mexican (62.3 percent) — who have little black admixture, the same cannot be said of many other common countries of origin: Puerto Rico (9.5 percent), Cuba (3.9 percent), The Dominican Republic (3.5 percent), and Colombia (2.1 percent). And many other countries with substantial amounts of black blood, could easily become increased sources of immigrants in the future, given their economic and political situations, especially Brazil, Venezuela, and Nicaragua.

Latin America’s most prosperous and stable countries have historically been not only the whitest ones, but the least black ones: Costa Rica, Chile, Uruguay, and Argentina. This is not a coincidence — and should not be lost on Americans looking to ensure a prosperous and peaceful future for themselves and their posterity. As Nicolás Palacios, the great Chilean racial theorist, wrote in 1904, “ . . . It is difficult to calculate how much damage just one black brought into a country can do.”