Democratic Massachusetts Rep. Ayanna Pressley wants to end the “school-to-confinement-pathway” by making it harder to punish non-white students. The theory, of course, is that blacks are disciplined more often than whites only because of “racism,” and that school discipline somehow leads to arrest and imprisonment later in life. Miss Pressley’s “Ending Punitive, Unfair, School-Based Harm that is Overt and Unresponsive to Trauma (PUSHOUT) Act” would set aside $2.5 billion in federal grants. Schools would have to “ban unfair and discriminatory school discipline practices and improve school climates” in order to get it.

The bill would ladle out yet another $2.5 billion to the Education Department for better civil rights data collection and enforcement. It would also set up a “Federal Interagency Taskforce to End the School Pushout crisis and its impact on girls of color.” Most of the yelling about school discipline has claimed that boys “of color” are victims, so Miss Pressley is breaking new ground.

Rep. Pressley claims the bill is necessary because “schools have become a place that criminalizes and harms girls of color.” Rep. Pressley’s website says that black girls are 54 percent of all preschoolers who are suspended. Schools suspend black girls seven times more often than whites, Hispanics twice as often, and American Indians three times as often. Her website is silent on suspension rates for Asians, which are consistently lower than those for whites.

The black congresswoman says racism is the problem. “Across our country, black and brown girls are pushed out of school not because they pose any sort of threat, but for simply being who they are,” she wrote in a Boston Globe op-ed. “Society too often deems our hair too distracting and our bodies too provocative, our voices too loud, and our attitudes too mean — demeaning our very existence before we even reach adulthood.”

Congresswoman Ilhan Omar (D-MN) supports the bill. “Across the country, students of color face rampant discrimination in school — and it is having lifelong consequences,” she said, adding that American society is “desensitized to the pain and trauma of black girls.” 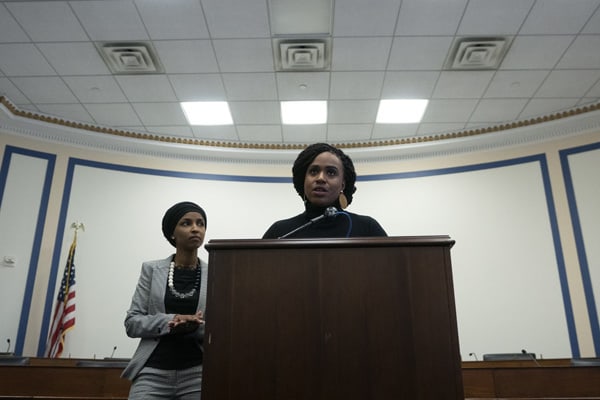 New Jersey Rep. Bonnie Coleman, another black supporter, claims non-white girls may appear violent because of their “trauma” and “unaddressed mental illnesses.” At the same time, “They’re being disciplined for hairstyles deemed disruptive,” she said. “They’re being disciplined for the energy, independent thinking and strength that would earn their white, male peers the label, ‘future leader.’”

A variety of civil rights groups and community organizations, including the National Black Women’s Justice Institute and the YWCA, endorsed the Ending PUSHOUT Act.

Miss Pressley doesn’t like School Resource Officers. However, schools started hiring large numbers of them beginning in the 1990s because of “the public’s perception of an increase in juvenile crime, especially school shootings.” The National Center for Education Statistics reports “the total victimization rate and rates of specific crimes” declined for students aged 12 to 18 from 1992 to 2017. Yet Rep. Pressley told The Intercept that “the mere presence of SROs in these schools can have violent consequences for students of color.” Once again, the theory is that police in school are cruising the halls, looking for innocent blacks to arrest.

The Intercept also claimed SROs pose “an additional threat” to illegal immigrants, who might be deported if they commit crimes. Students in California and other “sanctuary” areas probably don’t need to worry about that, and Miss Pressley wants to make this a national policy. Her bill would prevent schools that get federal funds from cooperating with ICE or the Department of Homeland Security.

But here’s the logic: If an illegal-immigrant student commits a crime so serious he should be arrested, police are supposed to look the other way because he could be deported. That would be favoritism and special treatment for illegals.

Many progressives want to undermine discipline in schools. California recently eliminated elementary and middle school suspensions for “willful defiance.” President Barack Obama’s administration pressured school districts to reduce the racial disparity in suspensions. If they didn’t, the feds could investigate them.

One district that followed the Obama administration’s orders was Florida’s Broward County. This district replaced many of its punitive measures with counselling and therapy. Violent crime rose. The new policies probably prevented officials from stopping the 2018 Marjory Stoneman Douglas High School shooter, Nikolas Cruz. He escaped arrest despite his violent record because of lenient policies. If he had had a criminal record, he couldn’t have bought a rifle.

The Anti-Defamation League suggested Mr. Cruz was “sympathetic to white supremacist ideology.” Therefore, in its yearly report, it blamed a killing arguably enabled by progressive policies on the “right wing.”

If Rep. Pressley gets her way, there will be more horrors. She and her “squad” can’t admit that blacks and browns are disciplined more than whites because they misbehave more often. If this bill is passed, Rep. Pressley’s faith-based crusade will sacrifice student safety on the altar of equality.

Robert Hampton is a contributing editor at American Renaissance. He is a Middle American who chose to wake up.
< Trump Has a Gift for Tearing Us Apart
A Timeline of America’s Fertility Rate >
Blog
Commentary
Videos
Podcasts
Follow us