Contempt for America on Independence Day

America is racist and so it must be deconstructed

Yet partisan scorn conceals the real problem. Independence Day, like Thanksgiving and Columbus Day, is no longer apolitical. The Fourth of July honors the nation created by the Founding Fathers — a nation, many believe, whose racism can never be redeemed.

Members of the Revolutionary Communist Party burned American flags outside the White House and called for a “world without America.” Unlike Jared Taylor and American Renaissance, party representative Carl Dix and what appears to be the party itself have accounts on Twitter. The latter account quote-tweeted Frederick Douglass’s famous speech “What to the Slave is the Fourth of July?” “This Fourth of July is yours, not mine,” he said. “You may rejoice, I must mourn.” “THIS is why we burned the American flag today!” said the account, along with the hashtag #AmericaWasNeverGreat.

The RCP is a fringe group; its sentiments are not. Colin Kaepernick, who reportedly forced Nike to recall its “Betsy Ross” shoes, tweeted Douglass’ speech. Major publications glorify Frederick Douglass’s speech every year in a new anti-Independence Day tradition.

The RCP’s demand that America should be unmade is no longer fringe. “No Borders, No Wall, No USA At All,” is a common chant at protests, including by members of the Democratic Socialists of America. Congresswomen Alexandria Ocasio-Cortez and Rashida Tlaib are in the DSA.

There’s not a single person I know that still refers to Columbus Day as anything other than Indigenous People’s Day. . . if you stand in opposition to our country’s actions and believe we occupy stolen land — what are we really celebrating? Why waste a beautiful holiday on the rotting carcass of self-described superpower when we could be doing anything else.

Black author Ibram Kendi, who claims to have written the “definitive history of racist ideas in America,” said, “Our American project is not built on the idea that we became free in 1776 or any year thereafter, but that we are fighting for freedom, oftentimes from the economic and political interests that became free on 1776.”

“[E]very year, we are reminded that while we are able to participate in the party, the party isn’t for us,” said Arielle Gray. “We are only visitors who may or may not be asked to leave once the party is over.”

“As black people, we’re expected to shut up and sing these songs that, for so long, declared and celebrated freedom that specifically excluded us, freedom that, in 2019, still doesn’t feel applicable to us,” wrote Jameelah Nasheed.

On television, academic Michael Eric Dyson, whom American Renaissance’s Chris Roberts called “a fat leech on the bodies of very sick white people,” compared the Betsy Ross flag to the swastika or a burning cross.

Angel Diaz of Rapetón, tweeted from his verified account:

White supremacists adopted the flag. It’s not that hard to comprehend. And fuck Betsy Ross and the Fourth of July https://t.co/gXoU439pVz

Please, please, please set aside some time today to allow Frederick Douglass to fuck you up: https://t.co/NIZwewItnd

These are restrained compared to the countless obscenity-laden insults against America and whites.

Happy Fourth of July! Remember this land is stolen from the indigenous people who live and lived here, built by slavery, and rips children from their families and puts them in cages! Fuck your glorious America

Fuck the fourth!! Fuck cops!! Fuck ICE!! Fuck trump!!! Fuck his concentration camps!!! Fuck institutionalized racism through US prison systems!! Fuck the USA!! NO ONE DESERVES TO CELEBRATE FREEDOM IN AMERICA UNTIL WE ARE ALL FREE!! AND FUCK YOUR BBQ TOO! pic.twitter.com/YHisnKQSme

fuck the fourth & fuck the flag, share & read this instead https://t.co/yhOHUrVQwN

President Trump’s patriotic speech was weak. The Daily Beast decided that President Trump’s tributes to Harriet Tubman, Martin Luther King, and Frederick Douglass “inadvertently highlight[ed] all the norms he’s crushed with his explosive rhetoric and banana republic-style presidenting.” He got no credit for his racial boot-licking. 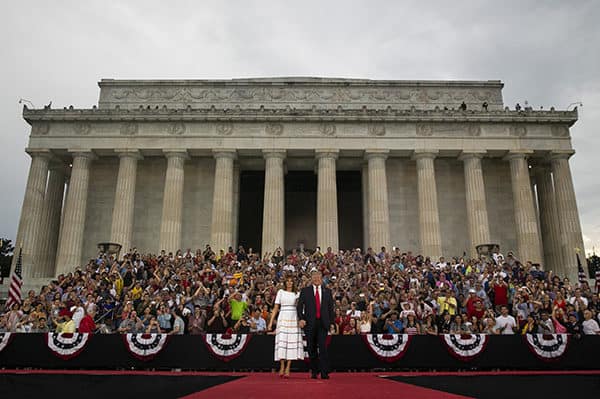 Other conservatives have only weak defenses of American patriotism. Kyle Smith of National Review and The New York Post wrote that America is the best country because even its critics refuse to leave. Why should conquerors leave?

George Will defends America because he claims the Constitution defends the natural rights advanced in the Declaration of Independence. He approvingly cites Judith Shklar’s contention that the Founders “announced a ‘declaration of independence from the entire European past,’ instead rooting sovereignty purely in the consent of the governed.”

Any real conservative knows no real-world society can satisfy utopian claims to universal equality and democracy. Besides, non-whites enjoy not just legal equality but racial preferences in jobs and education, mainstream media support, set-asides, special programs for their advancement, and tributes to their race even from white conservatives.

Still, many non-whites don’t think they are “free.” They never will. Even if they got reparations, it wouldn’t “heal” America. It would just set up the next demand.

Immigrants still come to America to earn money. They sense that America was founded by and for whites, and its traditional heroes, symbols and holidays reflect this. Even the Declaration of Independence is “racist.” Non-whites’ resentment can’t be appeased by lame appeals to a patriotism many don’t feel.

However, I would not resent the Japanese. Many non-whites, even first-generation immigrants, resent us and think America doesn’t deserve to exist. Many well-meaning whites want a civic identity to unite all “Americans,” but non-whites increasingly don’t. They are confirming what white advocates have said all along.

One was Thomas Jefferson. In explaining why blacks and whites could never live peaceably under the same government, he wrote that “nature, habit, opinion has drawn indelible lines of distinction between them.”

Frederick Douglass, in his own way, made the same point in his famous speech. “What have I, or those I represent, to do with your national independence?” he asked.

Mr. Hood is a staff writer for American Renaissance. He has been active in conservative groups in the US. You can follow him on Gab.
< In Search of Human Nature
Swedish Politician Reported by Police for ‘Hate Speech’ for Wanting to Deport Criminal Migrants >
Blog
Commentary
Videos
Podcasts
Follow us