Writing on the Wall

The 2000 Census counted 281.4 million Americans, a 13.1 percent increase over the 1990 total of 248.7 million. In 1990, non-Hispanic whites were more than 75 percent of the total population, but in just ten years had slipped to 69.1 percent. Blacks, at 12.3 percent were, for the first time, outnumbered by Hispanics at 12.5 percent. Asians (3.5 percent) and a mix of American Indians, native Hawaiians and other non-whites (2.5 percent) accounted for the rest.

This graph shows how the white percentage of the population has changed as the proportion of non-whites has increased. According to the Census Bureau, if current trends in immigration and birthrates continue, whites will drop to just under 50 percent of the population in 2060. Blacks are projected to increase slightly to 13.3 percent, while Hispanics would account for 26.6 percent and Asians for 9.8 percent. At that point, the total U.S. population is projected to be more than 432 million, which would mean another 145 million people — the equivalent of absorbing the total population of the United States in 1945. In fact, if current trends continue, whites will become a minority sometime before 2060. This is because the projections represented in the graph do not take 2000 census data into account. Before the count, Census Bureau demographers expected to find, at most, 275.8 million people, and the racial projections were based on that expectation. The actual count of 281.4 million was 5.6 million more than the highest estimate, which means we had the equivalent of two more Chicagos the bureau had not expected to find. These 5.6 million people and their descendants — overwhelmingly non-white — will hasten the day when whites become a minority.

The difference between the expected and actual counts is due mainly to illegal immigration. For the 2000 census, the bureau tried very hard to count illegals, and appears to have succeeded beyond its expectations. However, since most of them don’t want anything to do with the government, many escaped the count anyway, and no one really knows how many there are. In 1993, the Immigration and Naturalization Service (INS) thought there were some three million, and the official 2000 figure for illegals doubles that to at least six million. Researchers at Northeastern University in Boston estimate the number at closer to 13 million, and believe it increases by 500,000 to one million every year.

The legal immigrant population is also growing at 700,000 to 900,000 per year. The foreign-born population of the United States now exceeds 27 million, and one out of every 10 Americans is foreign-born, a figure not reached since the 1930s. (One quarter of the federal prison population is foreign born, which means foreigners are 2.5 times more likely than natives to end up in a federal jail.) This graph shows which countries send the most people and how many naturalize. Current levels of immigration are much higher than the historical average, and have doubled in 20 years. The subsequent graph depicts this sharp increase (illegal immigration is not included), and the regions of the world from which immigrants come. In this graph, the decade of the 1990s still has two more years to run but has already racked up an unprecedented 8.5 million legal immigrants. 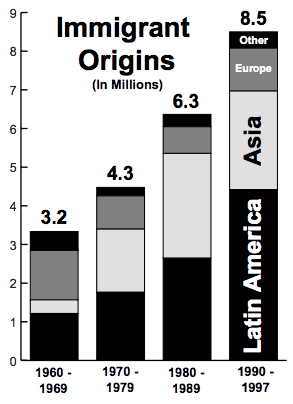 Because of changes in the law since the Immigration Act of 1965, approximately 90 percent of legal immigrants are non-white. Practically all illegal immigrants are non-white, which explains why 98 percent of the 2,684,892 illegals granted amnesty by the 1986 Immigration and Control Act were from the Third World: Africa, Asia, Latin America or the Caribbean. The number of immigrants increases every decade, and very few are white.

The 32.7 million rise in the population since 1990 is the single largest one-decade increase in the nation’s history. The Hispanic population grew by 57.9 percent, Asians by 48.3 percent, blacks by 16.2 percent, and whites by just 5.9 percent. The census bureau considers Middle Easterners and North Africans — Iranians, Iraqis, Syrians, Egyptians — to be white. More than 1 million have immigrated since 1970, and have produced an estimated 1 million children. These 2 million should be subtracted from the growth of the “white” population.

Of the country’s 35 million Hispanics, more than 20 million, or nearly 60 percent, are Mexicans. In 1960, there were fewer than two million Mexicans in the United States. So many Mexicans have moved north in recent years that some of the poorer parts of Mexico are effectively depopulated.

By 2060, the census bureau projects a Hispanic population of 114.8 million — more than one quarter of the total projected population, and greater than the entire population of the United States in 1920. As we have noted, this figure is based on projections that are already outdated.

Immigration is now the determining factor in US population growth. Since 1970, nearly 30 million immigrants — roughly one-third of all the people who ever came to America — have settled in the United States. Immigration and births to immigrants have accounted for 70 percent of the increase in US population since then, and the immigrant population is growing six-and-a-half times faster than the native-born population. Without this influx, the current population would be just over 226 million, or approximately what it was in 1980.

“Replacement-level fertility” is the number of children the average woman must have during her lifetime just to replace herself and her spouse. This figure is set at 2.11 rather than 2.0 to include a margin for premature deaths. If there is no emigration or immigration, a population with average lifetime fertility of 2.11 will eventually level off. It can continue to grow, even with replacement-level fertility, if people are disproportionately young. In 1972, the total fertility rate of American women dipped below replacement level for the first time, and the white rate is now well below replacement level. This means long-term population growth is fueled exclusively by immigration. In 1997, there were approximately 3.9 million births in the United States, reflecting a total fertility rate of 2.04. Non-whites, who are younger than whites and have higher fertility rates, were 28 percent of the population but accounted for 40 percent of the births. Hispanics have the highest lifetime fertility of any group, but are still below the figure of 3.326, reached in 1960-1964 as the the baby boom was ending. Because of their high fertility, Hispanic women have given birth to more children than black women every year since 1993.

Low white fertility means white children are an even smaller percentage of the population than whites as a whole, and are projected to shift to minority status at least 20 years sooner. Although 69.1 percent of the total population is white, only 60.9 percent of children under 18 are white, and are expected to become a minority in 2037. These projections do not include the unexpectedly large number of non-whites found in the 2000 census, so the transition is likely to take place even sooner.

Whites are moving away from areas hardest hit by immigration, especially the big cities. They are now a majority in only 52 of the 100 largest cities, down from 70 in 1990. More than two million whites left these cities since 1990, as more than 3.8 million Hispanics moved in. Over half of all whites live in suburbs, but more and more are fleeing to the country, which is still overwhelmingly white. Only 22.6 percent of whites now live in central cities (44.8 percent of immigrants live in cities). That figure is now smaller than the 23.4 percent of whites who live in rural areas (only 5.4 percent of immigrants live in the country). Blacks have residency patterns more like immigrants, with 53 percent in the cities, 33 percent in suburbs, and only 14 percent in the country. Our immigration policy is, in a word, insane. Even if every newcomer were white, well-educated, and English-speaking, it would be folly to expect the country to absorb another 150 million people over the next 60 years. The first two graphs end at 2060, but the Census Bureau happily forecasts yet more millions in the decades to come. We decry our dependence on foreign raw materials, and cannot generate enough electricity for the millions who have swarmed into California, yet we are supposed to be looking forward to yet more sprawl, congestion, crowding, and pollution.

And, of course, the vast majority of immigrants are not white, well-educated, English-speakers. We never tire of telling ourselves how important education is, yet we import millions of people who are illiterate in their own languages. We claim to want to improve the health of Americans, yet we import people sick with diseases like tuberculosis, which we once eradicated, and leprosy, which is exclusively an immigrant disease. We have spent billions trying to fight poverty, yet we let in millions who own nothing more than the clothes they wear. It would be hard to think of a government policy more flagrantly in opposition to the expressed goals of our society than immigration.

Americans have repeatedly told pollsters they want less immigration, and whites (and blacks) continue to move away from those parts of the country that immigration has transformed — and with good reason. Crime, ethnic conflict, deteriorating schools, and contempt for European civilization have been the invariable result of massive influxes of Third Worlders. In the long term, there is no guarantee that an increasingly non-white America will continue to abide by the institutions white nations — and virtually only white nations — take for granted: the rule of law, freedom of speech, constitutional government. Our children and grand-children will live to see the results of this reckless experiment with the basic identity of a once-great nation.

One of the most important roles of government is to avert catastrophes, both near and distant. This is why we have an army, public health, police, and an environmental policy. The current flood of Third-World immigration is a completely unnecessary catastrophe brought on by the very government that is supposed to be working for our interests. It is not just insane; it is criminal.

Stephen Webster is a former American Renaissance employee.
< Rumble in the East European Jungle
What Is Wrong with White Women? >
Blog
Commentary
Videos
Podcasts
Follow us