Like all Western nations, Germany suffers from waves of immigrants who clearly have no intention of integrating, and from a duplicitous political class that harries its citizens to accept what they instinctively know is wrong. At the same time, because of the Nazi period, the pressure on Germans to conform to the United Nations-sponsored ideology of multiculturalism has been immense. Many Germans themselves treat any assertion of national German pride as a manifestation of neo-Nazi tendencies, as something hideously offensive and shameful. 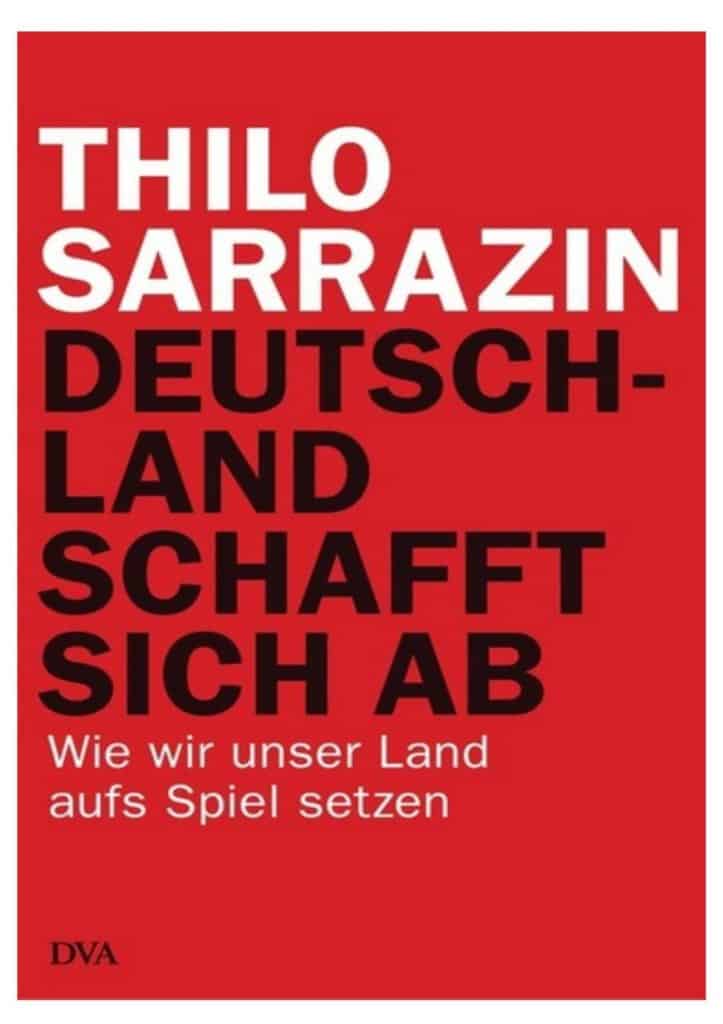 It is this specifically German context that makes the publication of Thilo Sarrazin’s book so remarkable. It is all the more remarkable for having been written by one of Germany’s top technocrats, a person at the very heart of the administrative establishment. Clearly, Mr. Sarrazin, who was until last September 30 on the executive board of the Deutsche Bundesbank, has had enough. He instinctively grasps the truth of Solzhenitsyn’s eleventh commandment: “Thou shall not live by the Lie.” The fact that Mr. Sarrazin’s book has become a best seller in Germany and attracted enormous support may well have prompted Angela Merkel, the German Chancellor, publicly to admit in October that multiculturalism has utterly failed in Germany. Indeed, it has, and not just in Germany.

The title of Mr. Sarrazin’s book has generally been translated as Germany is Abolishing Itselfor Germany is Doing Away With Itself. I believe a translation of the German verb abschaffenthat does justice to the implications of the book’s themes would be Germany Consigns Itself to Oblivion, or even Germany Commits Suicide or Germany’s Death Wish.

Mr. Sarrazin’s avalanche of evidence and professional analyses left me in no doubt that the suicide diagnosis is accurate. The author underlines the rather obvious but easily forgotten point that Germany is Germany “by virtue of its inhabitants and their living intellectual as well as their cultural traditions. Without the people it would merely be a geographical term.” The same, of course, is true of England, Denmark, China, or Zimbabwe. Mr. Sarrazin notes that for decades it has not been possible to talk about the preservation of Germany, since the left-wing media denounce such talk as Nazi, racist, and xenophobic. Mr. Sarrazin destroys the silence.

Like the highly trained member of the German technocracy that he is, Mr. Sarrazin presents thoroughly researched arguments. Each chapter addresses some aspect of the immigrant problem — poverty, fertility, declining mean IQ and educational standards, spiralling welfare payments, left-wing and intellectual cowardice, the relentless Islamification of Germany — providing the reader with a series of brilliantly written mini-monographs. The whole leads inexorably to his synthesis and the work’s devastating conclusions. Germany Consigns itself to Oblivion is a masterly display of erudition and logical exposition.

To begin with, Germans, especially high-IQ women, are not having enough children, and the population of indigenous Germans is dropping below replacement rate. This is not, however, a justification for immigration: “[T]he natural population decrease in one country or group of countries may not serve as the basis morally and politically to justify immigration or seizure of land. The territorial principle is an inviolable component of state sovereignty and respect for it serves to maintain peace.”

Mass immigration from the Third World, primarily Turkey, the Middle East and Africa, will not solve the problem of Germany’s aging population because the country’s economic future lies in its human and intellectual capital. Mr. Sarrazin cites studies by Richard Lynn, Tatu Vanhanen, and others that show the average intelligence of people from these areas is well below the European average. He goes on to note that “the three immigrant groups with the greatest lack of education and the highest social costs [Turks, Middle Easterners, and Africans] are also those who are reproducing themselves the most.”

Very few Turks who came to Germany as workers ever returned home. Instead, their families joined them from Turkey, and this has created a huge, hostile underclass. Mr. Sarrazin calls the entire guest worker program “a gigantic error.” He notes that some of the problems Muslims bring are: Below average employment, above average dependence on welfare and handouts, above average fertility, segregation with a tendency to create parallel societies, above average religious participation with an attraction to fundamentalist Islam, and above average criminality and participation in terrorism.

Mr. Sarrazin notes that Germany’s generous, typically European welfare state is cracking under the strain of millions of jobless Third-World immigrants. He nevertheless insists that those who cannot feed themselves and their progeny “should and must be helped.” But what happens when their numbers rise to the point that the means to clothe and feed the poor can no longer be found? The honest answer is that human beings who engage in reckless personal breeding experiments should be free to suffer the consequences, but this is farther than Mr. Sarrazin is prepared to go.

In any case, immigrants who live in parallel societies, courtesy of German and European taxpayers, and who have no intention of integrating cannot be considered fellow citizens. They are aliens who, in my view, do not meet the conditions laid down by Mr. Sarrazin for taxpayer charity. Furthermore, Mr. Sarrazin’s arguments in favor of welfare for foreigners living in Germany are the moral basis for massive transfers of German and European wealth to the Third World. It is common to claim that the starving and diseased in Somalia or Haiti — or wherever the latest Third-World disaster happens to be — are fellow citizens of the world and thus entitled to our money. This is what prompts the demented do-goodery of multimillionaire celebrities and pop stars who want other people’s taxes to subsidize reckless breeding everywhere.

In any case, as Mr. Sarrazin points out, attitudes towards poverty are driven by emotion rather than analysis. He notes that “the poverty risk threshold in Germany today is higher than the average net income of Germans at the high point of the economic miracle at the start of the sixties.” Mr. Sarrazin has even tested his theories about the largesse of the German welfare system. Before he wrote Germany Consigns Itself to Oblivion, he and his wife famously demonstrated that it is possible to live well and healthily on the money provided by the German welfare system. The publicity surrounding this experiment resulted in a television program, and a cameraman told Mr. Sarrazin he had been instructed not to film the apartments of welfare recipients because they were full of electronic gadgets.

Mr. Sarrazin identifies three reasons why any challenge to welfare provokes so much emotion. First, the recipients themselves like the system. Second, hordes of researchers and bureaucrats depend on it for their jobs. Third, if it is possible to live adequately on welfare but those on it do not, it is their own fault rather than some existential catastrophe. It is this last point that triggers the most rage and aggression.

Mr. Sarrazin describes the effects of Germany’s generous welfare, quoting one account of the chaos of life of an immigrant Turkish family that concludes with the observation, “And the flat screen television is always on, always.” It seems that one of the classic features of the black, white, or any underclass is addiction to television. It is the international underclass’s constant narcotic.

Mr. Sarrazin also writes about a small German town where the population of 300 Turks is derived from just two families. One of them boasts, “We don’t need the Germans.” Mr. Sarrazin also mentions Neukölln, one of the boroughs of Berlin, which is just one of many areas where immigrants have displaced the indigenous population. “A German going through these districts would feel like a foreigner in his own country,” he notes, an experience now available to the citizens of virtually any white country.

As in other European countries, the mainstream media ignore immigrant crime or fail to name or describe the criminals, because to do so would show that the perpetrators are immigrants. “Who is actually helped when facts in the public domain are suppressed . . .?” asks Mr. Sarrizin. “Certainly neither the truth nor clear analysis or integration.”

Mr. Sarrazin concludes his book with two scenarios: nightmare and salvation. In the nightmare scenario he looks ahead to the end of the 21st century. He sees a Germany that is no longer German. Rampant welfare spending and the failure to control Third-World immigration have effectively turned Germany into a Muslim state. Germany’s famous churches, including Cologne cathedral, have been converted into mosques. There are demands for a new German flag, one with a crescent and star.

Salvation, if it is still possible, comes from the populist right-wing parties all across Europe. Immigration controls are tightened, educational standards rise, and high-IQ women start having more children. The migrant quarters in the big cities shrink and far less Turkish and Arabic is heard on the streets. Germany has been brought back from the brink.

What makes Germany Consigns itself to Oblivion so valuable is Mr. Sarrazin’s fearless, rational honesty. Germans reading this book must experience something similar to that of a Russian reading a samizdat version of Solzhenitsyn’s Gulag Archipelago during the Cold War: an exhilarating experience that only the honest search for truth can deliver. I salute Mr. Sarrazin for his moral courage and intellectual acumen; and God bless his great nation in the struggle to save itself from oblivion.

Editor’s note: Germany Consigns itself to Oblivion was published in Germany in August 2010. It immediately shot to the top of the sales chart at Amazon.de, and dropped to number two only in late December. At that time it had 441 reader reviews, of which 73 percent were five stars, and 13 percent were four stars. Let us hope its enormous success will be the first step back from the brink.

View all posts by Frank Ellis

Dr Frank Ellis used to teach Russian at the University of Leeds and the author of The Damned and the Dead. His main academic interests are counterinsurgency and the Eastern front in World War Two.
< Tucker Carlson’s Last Laugh
Photos: The Gangs of Latin America >
Blog
Commentary
Videos
Podcasts
Follow us