American Renaissance, an online magazine described as a “white supremacist” publication by outlets such as The Washington Post and the Southern Poverty Law Center, held a conference at Montgomery Bell State Park Inn and Conference Center in Tennessee from July 28 to July 30. On the second day of the conference, a group of approximately 150 people gathered to protest the conference with an event titled “Oppose the Hate.” 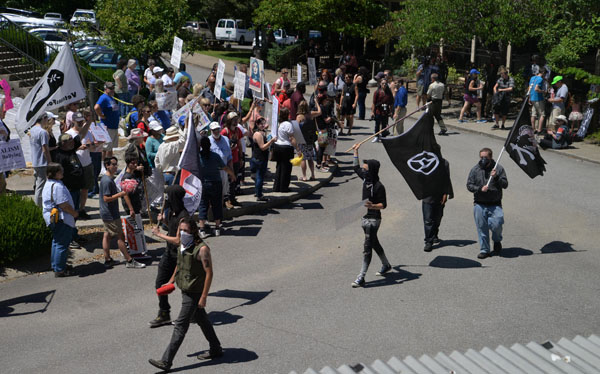 Oppose the Hate was hosted and organized by notable activist groups including the Tennessee Anti-Racist Network and the Tennessee Activist Coalition and supported by groups such as the Dickson County NAACP and the Nashville Peace and Justice Center.

According to a press release sent the TARN, the protest was organized to “make sure American Renaissance’s racist ideals are countered by speech that is pro-equality and pro-diversity.”

“There’s been protests there, throughout the years,” TARN Representative Kirk Braaten, who assisted in the organization and promotion of the protest, said. “There’s been nothing at this level. The reason it was so big this time is because a lot of different groups got involved to make this happen at this level.”

According to Braaten, another reason that the protest was held on a larger scale was due to the rise of alt-right and white supremacist groups in recent years.

“The rise in normalization of their ideals has certainly led to a resistance of those ideals,” Braaten said. “American Renaissance has never seen anything on this level.”

“(American Renaissance) tries to proclaim that they have some superior knowledge and that they take an intellectual approach to racism and bigotry. The reality is, essentially, they are the KKK in suits and ties. Regardless of how they paint themselves as a scientific, intellectual group, it still comes down to that they are racists and bigots.”