Teenager Shot by Police in Ferguson Called Himself ‘Glocks’, Posed with Guns and Boasted of Being a Gangster

The alleged gunman who is accused of opening fire in Ferguson on the anniversary of Michael Brown’s death posed holding guns on Facebook and bragged about being a gangster.

Tyrone Harris called himself ‘Ty Glocks’ after the gun maker and claimed he was part of a group called ‘Pistol Gang’.

He posed in multiple photos on Facebook with pistols and rifles whilst his friends waved wads of cash in front of the camera. 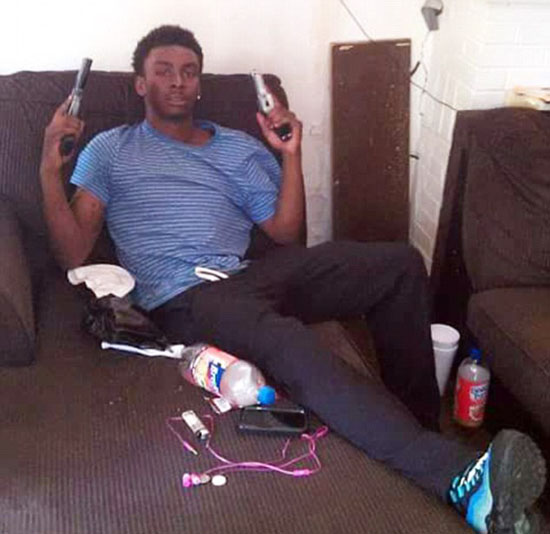 Harris also bragged in one post that he would ‘do da hit by myself’ and made gang signs for the camera.

The 18-year-old is currently in a critical condition in a hospital in St Louis, Missouri.

He has been charged with four counts of assault on law enforcement in the first degree.

He has also been charged with shooting a firearm at a motor vehicle and is being held on $250,000 cash bond.

St Louis County Police say that Harris opened fire with a stolen Sig Sauer 9mm handgun on Sunday night and that they shot him when he fired at them.

Court records show that that in November last year Harris was arrested for having a stolen 9mm pistol.

A probable cause statement showed officers pursued and arrested him after driving down a one way street in a stolen car.

The last post on his Facebook page was from Sunday at 4.51pm and reads: ‘I f*** around go on West Florissant tonight’, referring to the street where the protests were happening and where he was shot by cops.

Today it also emerged that footage from German TV network Ruptly captured the moment that Harris allegedly pulled out his gun from back of his pants.

The clip shows him running across the street towards where multiple gunshots were coming from as everyone else dives onto the ground.

The next time Harris was seen he was lying face down with blood stains on his torso having been shot by four plainclothes police officers after allegedly firing at them.