Blood and Politics: The History of the White Nationalist Movement From the Margins to the Mainstream, Leonard Zeskind; Farrar, Straus and Giroux, 2009. 672 pp.

Leonard Zeskind’s Blood and Politics is a history of the White Nationalist movement from 1974 to 2004. Although I have owned a copy since its publication in May, I have only recently sat down and read it cover to cover. It has received multiple reviews (from within and without the racialist community) which contain a fairly accurate summary of its contents. 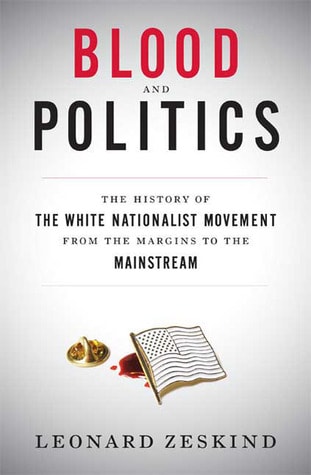 The book tracks the evolution of old fashioned Jim Crow “white supremacy” into modern White Nationalism over a thirty year period. In presenting his case, Zeskind draws an analytical division between “vanguardists” and “mainstreamers,” radicals and respectables, reformers and revolutionaries that has characterized the modern pro-White movement since its earliest days.

The “mainstreamers” believe in moderation and an electoral path to victory. The vanguardists believe in creating small, often violent organizations of the elect few and waiting for a general social/economic collapse. Throughout the narrative, Zeskind uses the stories of William Pierce (revolutionary) and Willis Carto (reformer) to illustrate these two conflicting tendencies within the movement.

Blood and Politics is comprehensive in scope. Zeskind runs through every imaginable sector of the pro-White movement: Klan, Neo-Nazi, Creator, Christian Identity (one-seed and dual-seed), Christian patriot, Neo-Confederate, White Nationalist, Council of Conservative Citizens, skinhead, revisionist, militia/paramilitary, underground terrorist, paleocon, race realist, and populist. He does an excellent job of illustrating how racialists drift through one or more of these cross-pollinating subcultures. Everyone from Francis Parker Yockey and Louis Beam to Tim McVeigh and Erich Gliebe is mentioned at some point or another.

For an Ashkenazi Jew, I dare say that Blood and Politics is objective in tone, almost scholarly even. To be sure, Zeskind writes in a Jewish anti-racist voice and can’t resist the occasional humanist quip, but his account of the White Nationalist movement is surprisingly free of the usual boilerplate. I found it informative, profited from reading it, and expect others will as well. If I had to level any specific criticism, I would say that Zeskind sacrifices depth for scope. He skips around from one sector of the movement to another in two or three pages.

The Gen Y racialist will find Blood and Politics somewhat familiar, yet profoundly alien. This is very much the history of another generation of racialists: its leaders, organizations, strategies, rhetoric, feuds, triumphs and tragedies. Over the past few months, I found myself picking it up and putting it back down. I immediately read the few bits that interested me: Duke’s political campaigns, Taylor and AmRen, Pierce and the National Alliance, The Bell Curve controversy, Buchanan and Sam Francis. I had to force myself to read the parts that did not. Later, I reflected on my new interest in sectors of the movement I had previously ignored.

Have you ever heard of “leaderless resistance” before? Have you ever seen racialists using strange numeric codes like 14/88 or 33/5? What about acronyms like “Z.O.G.” and “O.R.I.O.N.” or slogans like “White Pride World Wide” and “RAWOHA?” Have you ever heard vague references to the Fort Smith trial, the Northwest territorial imperative, or a gang of Aryan bank-robbers known as The Order? Can you explain the difference between one-seed and dual-seedline Christian Identity? In Blood and Politics, you will learn all about this and much more.

Be warned. This is not a story about the last decade. The internet hardly figures at all into Zeskind’s narrative. Blood and Politics has sixty chapters, but not a single one about StormFront, the largest website in the movement. Instead, Zeskind focuses on Don Black in his days as a Klansman, the jail time he served for plotting the invasion of Dominica, and his role in the defunct Populist Party. Alex Linder and VNN are nowhere to be found, but Glenn Miller and the White Patriot Party are discussed at length. There is no mention of Kevin MacDonald. The proliferation of vBulletin discussion forums in the 2000’s–the critical nodal point for Gen Y contact with the White Nationalist movement–is also ignored.

Blood and Politics is not about us. We were teenagers in the Clinton years. Under George W. Bush, we went to college, developed political opinions, graduated and entered the workforce. Some of us admired Dr. Pierce and tuned into ADV radio broadcasts. A few of us joined the National Alliance in its final days as a viable organization. We frequently read Pat Buchanan, Steve Sailer and Sam Francis at VDARE, created or joined online racialist forums, tuned into and laughed at Goyfire, subscribed to American Renaissance or The Occidental Quarterly, but never followed the travails of Willis Carto. We tend to be white collar atheists or pagans with an HBD-informed view of racial differences and a Kevin MacDonald take on the Jewish Question.

To say the least, this period of movement history (1974-2004) is strange, but important seeds were sown in this bleak period. I can’t resist comparing it to the Dark Ages. In a manner of speaking, it followed the Roman Empire but preceded the Renaissance. I think of David Lane who considered himself a latter day Viking, or Robert Miles, Louis Beam and Tom Metzger who thought Whites were over-civilized and could use a little Aryan barbarism. The violent, tattooed, beer soaked skinheads (the barbarians) represented a tremendous decline from courtly Southern segregationists (Roman patricians). Racialist discourse degenerated like Old Latin into dire warnings about black helicopters, the New World Order, and “Z.O.G.” From Race and Reason to the Aryan Nations theory that Jews are the genetic spawn of Satan to The Bell Curve. That’s the theme of Blood and Politics.

But there is another side of the story. In 1972, Wilmot Robertson published The Dispossessed Majority, a pathbreaking work that pointed the way forward. In 1992, he published The Ethnostate, a seminal contribution to an emerging White Nationalism. Revilo P. Oliver was active in this period. Dr. Pierce thundered against the Jews from a West Virginia mountainside. David Duke encouraged his followers to ditch their Klan robes and Stormtrooper uniforms. Jared Taylor appeared on the scene and restored a little class and literacy to the pro-White movement. Herrnstein and Murray picked up Carleton Putnam’s baton.

The vanguardists made their own contributions. In Blood and Politics, you will read about the Posse Comitatus and Nehemiah Township, an attempt to carve out a White ethnostate in North Dakota. Bob Mathews and The Order shed blood for the ideal of a Aryan nation in the Northwest. William Pierce and the National Alliance pushed the ideal of an exclusive White ethnostate. In fact, “White Nationalism” owes more to its ruder beginnings in Aryan Nations literature and The Turner Diaries inspired bank-robbers than to Jared Taylor’s polished suit and tie crowd. We can’t ignore this part of our heritage.

If the past was reminiscent of the Dark Ages, White Nationalism has since settled into its High Medieval period. The interregnum is over. We have raised a few institutions that are like beautiful Medieval cathedrals. We have established a small network of discursive spaces that are like the first universities. We have a powerful new genomics based theory of race and and a new general theory of anti-Semitism that draws upon sociobiology and evolutionary psychology.

I foresee a period of growth and maturity ahead. The sheets and costume crowd are fading out. The old leaders are aging and dying off. Their version of racial discourse will pass away with them. In the next decade, I think a mass membership White advocacy organization will finally emerge for sane and normal people. The cultural ground has been prepared for it.

The field is wide open to a new generation of racialists willing to make their mark. Three decades from now, the sequel to Blood and Politics ought to prove interesting than the original. I think Mr. Zeskind will be following many of us in the years to come.