British evolutionary psychology researcher and adjunct anthropology professor Edward Dutton has written another brilliant work on a taboo subject. In Race Differences in Ethnocentrism, he analyzes racial differences in the tendency to elevate their own groups and denigrate others. Prof. Dutton, who teaches at university of Oulu in Finland, distinguishes between positive and negative ethnocentrism. The first means taking pride in one’s own group and being willing to make sacrifices for it, while he defines the second as “being prejudiced against and hostile to members of other ethnic groups” (page 2). The main purpose of the book is to explain why some races are more ethnocentric than others and why contemporary whites have relatively low levels of ethnocentrism.

Prof. Dutton divides humans into four main races: sub-Saharan African, Caucasian, East Asian, and South Asian, although he recognizes that this does not include every ethnic group. South Asian in this context also includes Middle Eastern and North African populations, based on the genetic similarity between all three. He took data from the World Values Survey, with positive ethnocentrism determined by the percentage of people saying that they would fight for their country and those disagreeing with the statement that they were “not at all proud of my nationality.” Negative ethnocentrism was estimated based on how many people would not want “someone of a different race” or “an immigrant” as a neighbor. Negative ethnocentrism was highest among South Asians, followed by East Asians, then Caucasians and Africans. Positive ethnocentrism was more evenly distributed among Africans, Caucasians and East Asians, but much higher among South Asians.

Prof. Dutton tries to explain why South Asians stand out in both respects. One explanation is the high degree of cousin marriage among Muslims. About 22 percent of Indian Muslims are married to relatives who are second cousins or closer, and an eye-opening 55 percent of British Pakistanis are children of cousin marriages. Cousin marriage means these ethnicities have less variation in their gene pools. According to Genetic Similarity Theory, to which Prof. Dutton dedicates an entire chapter, this high degree of relatedness predicts a greater degree of attachment to the group. Working for the benefit of others with similar genes helps pass on one’s own genes, so people have evolved the instinct to do this. 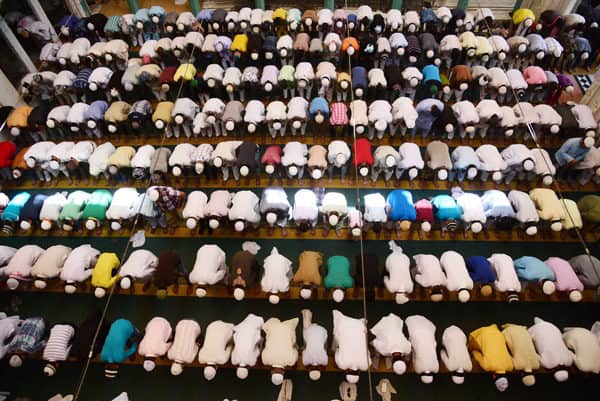 Another reason for high ethnocentrism among South Asians is religion. Prof. Dutton describes several ways religion promotes ethnocentrism, particularly if “there is a God concerned with morality and group purity” (161). Members of a religious group believe that the lives of their co-religionists have eternal significance, making them more willing to act for the benefit of the group even when this requires sacrifice. They also believe behavior is judged by a God who smiles on their group, which is a further reason for in-group cooperation. Prof. Dutton argues that religion can encourage negative ethnocentrism if it casts outsiders as damned or impure.

Prof. Dutton includes research on Jews but not in a way that make it easy to compare them to other groups in ethnocentrism. However, he does does cite research showing that Israeli infants were more likely than north German infants to have an intense fear response to strangers.

Jews may have a particularly small gene pool. The largest Jewish ethnic group — the 10 million Ashkenazi — has been traced back to only 350 ancestors in the year 1400. One 2010 study (Atzmon et al.) found that Ashkenazi Jews were on average as similar to each other genetically as fourth cousins. Another study from 1875 by G. H. Darwin found that 20 percent of Jews living in England were married to cousins, and a survey between 1972 and 1975 concluded that “25.4 percent of married Jews living in Iran were in consanguineous marriages” (170), although more recent research showed lower rates for Israeli Jews. As with South Asians, Prof. Dutton believes such a gene pool is conducive to ethnocentrism.

Prof. Dutton repeatedly draws on the concept of Life History Strategy, also known as r/K theory, according to which different types of animals as well as different groups of humans have developed different reproductive strategies in response to different environments. Some animals produce many offspring with many partners but invest little effort in caring for offspring. This is an adaptation to an unstable, dangerous environment, in which having many offspring is the best way to ensure that at least some survive. In more stable environments, it may be more advantageous to produce fewer offspring, but invest more in them to ensure survival. The former are known as having a fast Life History — or being more “r-selected” — while the latter have a slow Life History and are more “K-selected.”

In human beings, sub-Saharan Africans are argued to have a faster Life History than whites and South Asians, and Northeast Asians the slowest. Those with a faster Life History mature more quickly and are also more impulsive and aggressive, as an adaptation to a more chaotic environment. Such people are less inclined to trust and cooperate with others, whether co-ethnics or outsiders. Slower Life History strategists are more trusting and cooperative and more able to control their impulses. They are better adapted to a consistent environment where challenges, such as cold winters, require cooperation to overcome. Prof. Dutton speculates that Africans may be less ethnocentric than South Asians because of lower levels of cousin marriage and religiosity. The lower levels may be associated with a fast Life History. Those more impulsive and less selective in mating would be less likely to form stable long-term family bonds, and have a lower likelihood of cousin marriage. As for religion, Africans may never have reached the level of social organization in which a religion like Islam would have taken root. Islam welcomes universal conversion, and thus promotes shared identity and cooperation. People with a fast Life History would be less likely to think in universal terms because they are less trusting of others and accustomed to a chaotic society of warring tribes.

Prof. Dutton offers several theories why Northeast Asians would be more ethnocentric than whites. One is simply that that they are more genetically similar to each other and would instinctively take a greater interest in the well-being of their co-ethnics. A harsh environment in which the ill-adapted died would produce a smaller gene pool.

Another possibility is that Northeast Asians are generally less open to change and novelty, and thus less open to outsiders. Prof. Dutton cites studies suggesting Northeast Asians are higher in Neuroticism and lower in Openness and Extraversion than whites, making them more fearful, more averse to risks, and less likely to enjoy novelty (Kura et al., 2015, Eap et al., 2008).

One of the most interesting factors correlated with ethnocentrism is the average age of a population, with younger populations having higher national pride. Earlier research to which Prof. Dutton contributed (Dutton et al., 2016) found that age was the single strongest factor that predicted positive ethnocentrism. Prof. Dutton speculates that this may be due to other factors related to average age. High birth rates and low life expectancy obviously result in low average age, and these are often found in low-IQ high-poverty societies. Such societies can be stressful, and stress tends to increase positive ethnocentrism.

The countries with the highest average age are overwhelmingly white (with the exception of Japan and Hong Kong), while the youngest are African and Middle Eastern. The median age in Gaza is estimated at 17, far lower than the world average of 30, and the EU average 43. There are four African countries with a median age of under 16!

Prof. Dutton tries to explain the relatively low ethnocentrism of whites. One theory is that we have an evolutionary strategy based on producing geniuses. Exceptional people make breakthroughs that advance the interests of the group, but the type of environment that produces and supports such people is one of low conformity. This would decrease ethnocentrism.

As he does in his earlier book, At Our Wits’ End, Prof. Dutton also argues that social changes connected with the Industrial Revolution have meant far less natural selection in industrialized populations since then. For most of history, children with maladaptive traits usually died, but now they often survive. This means harmful mutations stay in the gene pool.

Prof. Dutton argues that ethnocentrism benefits groups in the struggle for survival, so natural selection has generally promoted it, whereas maladaptive attitudes such as very low ethnocentrism are the product of mutations. Mental and physical abnormalities due to genetic mutations are often found together, so that as the population is increasingly burdened with mutations affecting physical health, it may also be afflicted with reduced ethnocentrism, which reduces a population’s chances for long-term survival.

Prof. Dutton’s writing can sometimes be hard to follow, and his writing can be cramped or convoluted. To his credit, Prof. Dutton goes to considerable lengths to explain key concepts, including ethnocentrism, race, and ethnicity, and to reply to fashionable egalitarian arguments. He even devotes a chapter to defending the much-maligned concept of IQ, and cites average IQs for different groups. He finds an average IQ of South Asian/Middle Easterners of only 80.

More ethnocentric groups tend to out-compete less ethnocentric ones. Whites’ low ethnocentrism, then, is a disadvantage, and it is unwise to allow large numbers of people with higher ethnocentrism into their nations as migrants. Prof. Dutton expects whites to become more ethnocentric only after we are subject to the severe stress of a declining society in which foreign groups gain more power. Let us hope that the current resurgence in national identity among whites will come sooner than that and prove him wrong.

Mr. Jackson is a white American with an interest in race realism and a passion for writing.
< Ninth Circuit Hands Trump a Win on ‘Return to Mexico’
Row Over German Anthem Erupts amid Nationalism Debate >
Blog
Commentary
Videos
Podcasts
Follow us