The Emancipation Memorial in Washington, DC.

Disney Plus will soon host Hamilton on its streaming platform. Hamilton is a hip-hop musical in which the Founding Fathers are black. King George III — obviously a villain — is the only white character. “Our cast looks like America looks now, and that’s certainly intentional,” composer Lin-Manuel Miranda told the New York Times in 2015. He said in another 2015 interview: “We’re telling the story of old, dead white men but we’re using actors of color, and that makes the story more immediate and more accessible to a contemporary audience.”

Hamilton’s point isn’t that Alexander Hamilton, George Washington, Thomas Jefferson, and the other Founding Fathers were black, but it suggests that blacks were the true founders. Many school children will be introduced to the Founders via Hamilton, and they’ll imagine them as rapping non-whites instead of dignified WASPs. The Gilder Lehrman Institute’s Hamilton Education program has already brought 250,000 students to Broadway to see Hamilton.

Many scholars, journalists, and politicians claim that blacks built America. Last weekend, Rep. Ayanna Pressley (D-MA) said this in her House floor speech:  “Black Lives Matter is a mandate from the people. It’s time. Pay us what you owe us. Our Black skin is not a crime, it is the beautiful robe of nation builders.”

This sounds like The New York Times’s “1619 Project.” The Pulitzer Prize-winning essay series argues that blacks were the true founders of America. The lead essay, written by Nikole Hannah-Jones, attributes essentially all of America’s wealth to the toil of black slaves.

[Blacks] transformed the lands to which they’d been brought into some of the most successful colonies in the British Empire. Through backbreaking labor, they cleared the land across the Southeast. They taught the colonists to grow rice. They grew and picked the cotton that at the height of slavery was the nation’s most valuable commodity, accounting for half of all American exports and 66 percent of the world’s supply. They built the plantations of George Washington, Thomas Jefferson and James Madison, sprawling properties that today attract thousands of visitors from across the globe captivated by the history of the world’s greatest democracy. They laid the foundations of the White House and the Capitol, even placing with their unfree hands the Statue of Freedom atop the Capitol dome. They lugged the heavy wooden tracks of the railroads that crisscrossed the South and that helped take the cotton they picked to the Northern textile mills, fueling the Industrial Revolution. They built vast fortunes for white people North and South — at one time, the second-richest man in the nation was a Rhode Island “slave trader.” Profits from black people’s stolen labor helped the young nation pay off its war debts and financed some of our most prestigious universities. It was the relentless buying, selling, insuring and financing of their bodies and the products of their labor that made Wall Street a thriving banking, insurance and trading sector and New York City the financial capital of the world.

Blacks are also “foundational to the idea of American freedom:” “More than any other group in this country’s history, we have served, generation after generation, in an overlooked but vital role: It is we who have been the perfecters of this democracy.” She argues that the Revolution was fought to defend slavery and whites never did anything good for blacks. 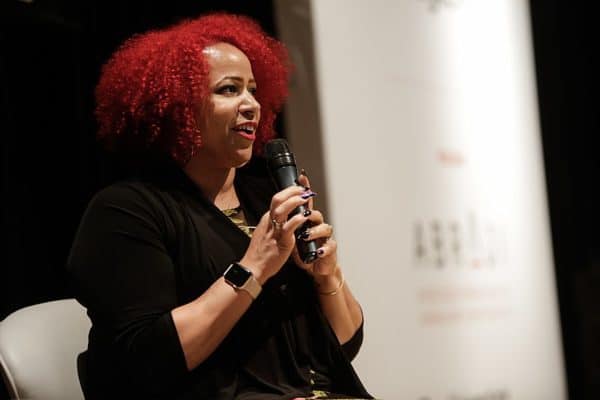 Writer Ta-Nehisi Coates, Vox, The Guardian and other writers and publications agree that black slaves created American prosperity. “The very foundation of this country, that the wealth we have built, the way we became the greatest country on the face of the planet, was literally on the backs of those who were kidnapped and brought here by force,” former presidential candidate Beto O’Rourke said in a Democratic primary debate last year. He says this justifies reparations.

The “1619 Project,” despite its many historical errors, is coming to classrooms. Schools in Buffalo, Chicago, Washington D.C., and Newark, New Jersey, have all announced plans to teach it in schools. Random House Publishing plans to release “1619 Project” books for young students, including two picture books. Miss Hannah-Jones’s influence will be felt for decades, and many young Americans will believe her fantastic nonsense.

One fashionable fantasy is that blacks freed themselves. The New York Times says so. “Neither Abraham Lincoln nor the Republican Party freed the slaves,” columnist Jamelle Bouie wrote in a June op-ed. “They helped set freedom in motion and eventually codified it into law with the 13th Amendment, but they were not themselves responsible for the end of slavery. They were not the ones who brought about its final destruction.” Who freed them? “The slaves freed the slaves,” Mr. Bouie said. He cites a University of Connecticut history professor Manisha Sinha, who wrote in The Slave’s Cause: A History of Abolition, that “slave resistance” led to abolition. Columbia University history professor Stephanie McCurry scoffs at this. “The brutal fact is that, notwithstanding years of principled abolitionist activism, it took war to make emancipation possible,” she wrote in her 2016 review of Miss Sinha’s book. Miss McCurry also said that not “one of the abolitionist societies had black members,” further undermining the “blacks freed themselves” argument.

The blacks-did-it-all school of thought is theory is thriving. Boston University history professor and bestselling author Ibram X. Kendi explains: “In the White savior story, Lincoln, Grant or some White man won the Civil War and saved Black people. In the actual history, Black soldiers, spies and runaways were as critical as anyone in winning the Civil War.”

In the White savior story, Lincoln, Grant or some White man won the Civil War and saved Black people. In the actual history, Black soldiers, spies and runaways were as critical as anyone in winning the Civil War.

Professor Kendi is one of our current darlings. His books on racism, including his Antiracist Baby picture book, top the bookseller charts. Cable news invites him to explain American history to us.

History is said to be written by the victors. If Black Lives Matter wins the current debate, it will write the history of our country.

Robert Hampton is a contributing editor at American Renaissance. He is a Middle American who chose to wake up.
< Citing Racial Bias, San Francisco Will End Mug Shots Release
A Tale of Two Students >
Blog
Commentary
Videos
Podcasts
Follow us