Hey Dan Rather: Want to Know What It Would be Like If Only Whites Voted?

At a recent Trump rally, the President mentioned his decision to create a new branch of the military. In response, the crowd repeatedly chanted, “Space Force!” Journalists reacted with indifference. Yet the call to conquer the stars appeals to something primal in the European-American imagination.

.@POTUS: “We have the Air Force, now we’re going to have the ‘space force.'” https://t.co/ecUNWx8Dyl pic.twitter.com/8pLckUCdP2

I’d argue the rally was a rebuttal to a June 6 tweet from Dan Rather:

There was a time in American history when really only white men could vote. Imagine where we’d be today if that was still the case.

Aside from unintentionally reaffirming the Founders’ racial vision of citizenship, Mr. Rather’s comment reminds me of a time not long after the Voting Rights Act of 1965, when Mr. Rather’s dream of universal suffrage was achieved. It was a time of transition between the old white America and the post-white, post-America that was to come.

On July 16, 1969, as white men prepared to launch the Apollo 11 mission to conquer the moon, civil rights leader Rev. Ralph Abernathy led what Instauration magazine called “one of the sorrier moments in the saga of mankind.” The reverend directed “a mule caravan to Cape Canaveral before the first manned moon landing” to demand that the money spent “should go to the poor and not be thrown away on space.” 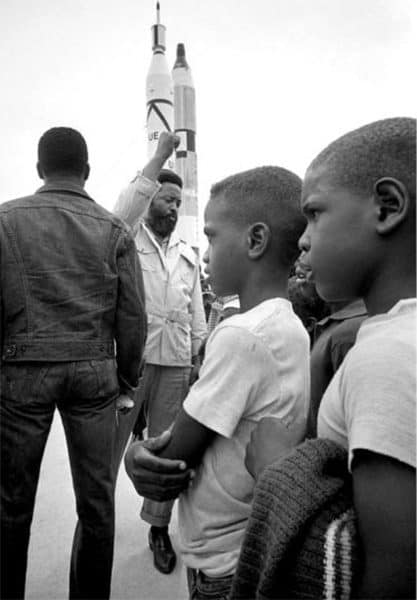 In another edition of the magazine, a contributor stated:

With whites upon the threshold of the most fabulous voyage of exploration of all time, Negro poverty and white selfishness were the liberal-minority coalition’s overriding consideration. . . . Like all fixation or emotional arrests of the personality, it is a form of insanity — in this instance a mouse-like insanity, deliberately depreciating Nordic heroism and achievement. Once the insanity is properly implanted, it follows logically that if Ralph Abernathy’s protest, which in reality was nothing more than a protest against the white man’s incomparable superiority, was ‘legitimate,’ the space flights themselves were and are ‘illegitimate.’

At the time, Rev. Abernathy, who had succeeded Martin Luther King as head of the Southern Christian Leadership Conference (SCLC), was called a “giant” in the black magazine Jet for organizing the protest. Columnist Simeon Booker noted that besides wasting money, NASA “disregarded equal opportunity programs” and had “one of the poorest minority hiring records among U.S. agencies.” Jet identified Rev. Abernathy and his followers as “the only major Negro participants in the launching.”

On this day of NASA’s greatest triumph, the administrator of NASA, Thomas Paine, was forced to listen to Rev. Abernathy decry “the tragic and inexcusable gulf that exists between America’s technological abilities and our social injustices.”

In Apollo in the Age of Aquarius, author Neil Maher describes an even more bizarre incident from this protest:

Before concluding the rally, Abernathy again faced Paine and reiterated his demand that the space agency use its technology to tackle poverty back on Earth. . . .  He then held up a noose and gestured toward Paine’s neck. When the director of America’s space program smiled uncomfortably and then slowly bent forward, Abernathy carefully slipped the rope, which carried a small tag reading ‘I Helped Hang Poverty,’ over Paine’s head in an effort to encourage NASA’s leader to support the campaign. According to David Nye’s Narratives and Spaces: Technology and the Construction of American Culture, there was a massive racial divide in how Americans felt about the space program.

The Apollo Program was most appreciated by those who were young, affluent, well-educated, Caucasian, and male. . . The stronger opposition lay within the black community, where less than one in four people supported the expenditure of $4 billion a year for the Apollo Program. A minority added, ‘God never intended us to go into space.’ Most black newspapers carried editorials and cartoons attacking the space program, including the Chicago Daily Defender and Muhammad Speaks. The New York Amsterdam News cartoon depicted President Richard Nixon smiling up at the moon while sitting on a huge spherical bomb with a lighted fuse, labeled, ‘minority frustrations.’

Maher states that in the aftermath, NASA was forced “to bend to the movement’s demands.” NASA duly “reoriented some of their space technology toward more pressing urban problems, especially those affecting African American neighborhoods, including air and water pollution, poor sewage and garbage disposal, and unhealthy living conditions.” In other words, as Mr. Maher puts it, the civil rights movement “had begun bringing the space race back down to Earth.” (p. 48-50) More broadly, since the triumph of the civil rights movement, every institution in American society must obey the imperative of egalitarianism. This is what I call “Black Run America” — it’s not that blacks literally run America, but that the perceived welfare of blacks and the supposed moral necessity of achieving “equality” is now the highest goal of American society.

Thus, instead of moon bases or trips to Mars, 2018 is now witnessing the return of the “Poor People’s Campaign” that Abernathy was championing back in the 1960s. After a half century of effort and untold billions, non-whites are still complaining that whites haven’t given them enough. There has been no progress. Americans are still stuck in the mud when we could have gone to the stars.

So let’s think about Dan Rather’s question. Where would we be if this country still had the political system created by the Founding Fathers? We would have gone much farther. To European-Americans, the purpose and ambition of America can be glimpsed in the launch of a rocket. To racial egalitarians, it can be seen in a mule cart carrying a sign demanding more handouts.

Paul Kersey lives in Denver, Colorado and is the author of Escape from Detroit.
< “I Couldn’t Help Being Born White”
Chile to Expel 2,000 Illegal Migrants in 2018 >
Blog
Commentary
Videos
Podcasts
Follow us