What’s Ahead for Whites

And what to do about it.

Mark Twain is supposed to have said, “Predictions are difficult, especially about the future,” but I’m going to try anyway. What’s ahead for white people in this country?

First, there will be fewer of us.

Please look at this graph. On the left are changes in the number of American whites by decade. From 1970 to 1980 – the left-most bar – we grew by more than 11 million. By the decade of 2010 to 2019, our numbers shrank by more than 16,000. But look at the annual breakdown for that decade in the graph on the right. We were still growing from 2010 to 2015, but started losing ground in 2016. In the last three years, the country lost more than half a million whites. That was because there were more white deaths than births. As you can see from this chart, the number of white deaths – the lower line – grew past births for the first time in 2016, and the gap continues to grow. And we’re getting more non-whites. The top line on this table shows that in the decade from 2000 to 2019, we got 10 million more Hispanics. Also, 4.3 million more Asians. 3.2 million more blacks, 1.7 million more mixed-race people, and a few more American Indians. As I just mentioned, our numbers shrank. In 1960, whites were nearly 90 percent of the population. By about 2040, we are projected to be a minority. Every white child age 16 or under is already a minority.

Under Joe Biden, illegals are pouring across the border at the highest rates in 20 years.

If you think this is a “great replacement,” Wikipedia says you believe in “a white nationalist conspiracy theory.” Our country treats whites like a problem that must be solved. Some months back, Coca-Cola told its employees to “try to be less white.” Government and almost all big companies give their employees this kind of training. Every big organization has an army of people promoting “diversity.” Diversity means fewer white people, especially white men. Do you know how many staff at the University of Michigan have “diversity” or “inclusion” in their job titles? One hundred and sixty-three.

You’ve heard of Critical Race Theory, which says all white people have unfair privileges and oppress everyone else whether we want to or not. That’s just our nature.

Maybe you heard about Sam Richards, professor at Penn State. He made a white student stand up in a lecture class and asked him whom he had oppressed that day. When the man said, “nobody,” Prof. Richards said, “You’re breathing and you left your house so you may have oppressed somebody.”

On Christmas Eve, 2016, Professor George Ciccariello-Maher tweeted, “All I Want For Christmas is White Genocide.” At Dickinson College in Pennsylvania, the school paper ran a piece by a black senior called “Should White Boys Still Be Allowed to Talk?” Her answer was “Hell, no.”

The Journal of the American Psychoanalytic Association just published an article called “On Having Whiteness.” It called whiteness “a malignant, parasitic-like condition,” adding, “There is not yet a permanent cure.” In an article called “Whiteness is a Pandemic,” a prominent black author wrote that “White supremacy is a virus that, like other viruses, will not die until there are no bodies left for it to infect.”

Being white is so awful that a group called Recovery from White Conditioning has a 12-step program – like Alcoholics Anonymous – to cure us.

Last month a North Carolina man was arrested for putting I {heart} being white stickers on cars. He was charged with ethnic intimidation.

In his inaugural address, Joe Biden worried more about racism and white supremacy than about Covid or the economy or anything else. After the January 6 Capitol riot, 26,000 national guardsmen joined thousands of local and federal police to guard the Capital against an imaginary white supremacist threat.

In May, Attorney General Merrick Garland and DHS Secretary Alejandro Mayorkas warned that white supremacy is now the top security threat to America. The FBI now says hate crimes are a “national threat priority.” There are 3,200 American police departments that reported no hate crimes last year, and that’s unacceptable. So in June, the FBI ordered its agents to “approach each and every law enforcement agency in your district that reports zero hate crimes or does not participate in hate crimes reporting to learn what’s going on and why that’s happening.” There just have to be more hate criminals out there. And, of course, they’re white.

Not one elected official talks about the interests of whites. I can’t remember when a politician even said anything good about white people. We are citizens of this country, but we might as well be stateless people who are just allowed to live here. Our government treats us like an embarrassment.

The George Floyd riots were an eruption of contempt for whites. Wikipedia lists 238 statues and monuments destroyed by BLM mobs or removed by terrified bureaucrats. Fifty-eight percent were Confederates, but the rest were such people as Washington, Jefferson, Lincoln, Teddy Roosevelt, Andrew Jackson, Kit Carson, Francis Drake, Louis the XVI, Mahatma Gandhi, and a total of seven statues of a canonized Catholic saint, Junipero Serra.

Thirty-seven statues of Columbus were torn down or carted off before the mob got to them. Here’s Columbus with Queen Isabella in the California State Capitol, before they were hauled away. Columbus used to be a hero because he brought European civilization to the Western hemisphere. Now, that is what makes him a villain. Whites should never have come, and the nation they built is a crime and a disgrace.

Tearing down the statue of the pioneer mother at the University of Oregon was the most chilling desecration of all. Motherhood is no longer sacred if it means bringing a white child into the world.

As these monuments come down, what’s going up? There are now at least three public sculptures of George Floyd, including this 700-pound statue in Newark, New Jersey. Rockefeller Center just put up this piece of African art. 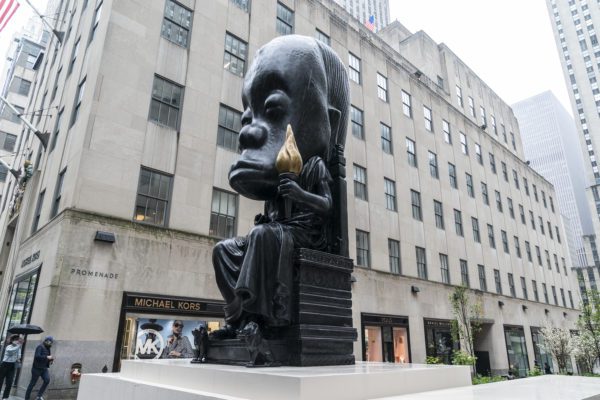 So, what’s ahead? More non-whites and their white “allies” will make policy. Blacks and Hispanics can’t succeed the way we do, so there will be ruthless preferences for them that will mean discrimination against us. Congress could pass new laws, but it won’t have to. Every non-white preference today is based on “civil rights” laws that were supposed to ban racial discrimination – so laws don’t matter.

There could be race quotas for directors and executives of all companies. Race quotas for juries and grand juries – and these would be floors, not ceilings.

Our rulers will pressure private companies to muzzle dissidents. They could tell banks not to give us mortgages. Cut off our electricity, water, telephone. If that doesn’t work, call what we say hate speech and make it a crime. If the Supreme Court tries to save the First Amendment, pack the court.

Impose a “reparations” tax. Every white person making more than a certain amount would pay an additional 10 percent of gross income. There could be an even bigger “white privilege” tax on inheritances. Whites got their wealth through oppression, so they shouldn’t be able to pass it on.

Make anyone buying a gun sign a diversity pledge. Impose a stiff anti-hate tax on any marriage license granted to two white people.

“Progressive stacking” will become routine. That means, in a group, white people – especially white men – speak last. And when whites speak in public, they will start by confessing their white privilege and apologize for standing on land they stole.

I don’t know if all these things will happen; some will, for sure. But oppression will intensify at different rates in different places, so whites will gather in the least oppressive ones. You can move to one of those places. Whites will eventually elect representatives who stand up for them. You should be a part of that.

The bitter truth is, we can’t save the whole country. We built it and we made it great, but it’s not ours anymore.

Our goal should be local autonomy and eventual independence, so encourage all secession movements. Liberals are vicious, but if we are determined to leave, I don’t think they will kill us just to keep our corpses in the Union. Our rulers hate our history and despise us. They should be happy to see us go.

So, it’s up to us to make this happen, and up to us alone. The decision is ours. If we want a place of our own on this continent, where we can be an outpost of Europe – without apologies and for ever – we have to make it happen.

Jared Taylor is the editor of American Renaissance and the author of Paved With Good Intentions, White Identity, and If We Do Nothing.
< ‘Emancipation Day:’ Another Day to Bash Whites
Teachers’ Union Sues Rhode Island Mom over Requests for CRT Curriculum Info >
Blog
Commentary
Videos
Podcasts
Follow us