Former Virginia Tech football player Isimemen Etute was found not guilty of all charges Friday in the beating death of a Blacksburg resident following an online catfishing scheme.

Etute, a Virginia Tech freshman linebacker at the time of the incident in May 2021, had been charged with second-degree murder, which carries a sentence of five to 40 years, and the jury could have convicted him on the lesser charge of voluntary manslaughter. Instead, the jury believed a self-defense argument that Etute feared for his life after seeing the victim “make a reach” toward his bed where a knife was later found.

Etute collapsed in tears as the verdict was read, with cheers erupting from a contingent of about 30 family members, supporters and former teammates.

After the verdict, Etute’s lawyer, James Turk, said his client deserved a second chance at a football career following the jury’s decision.

Etute was arrested June 2, 2021, and charged with the May 31 murder of Jerry Smith, a local Blacksburg man who had posed as a woman online to meet straight, college-aged men. 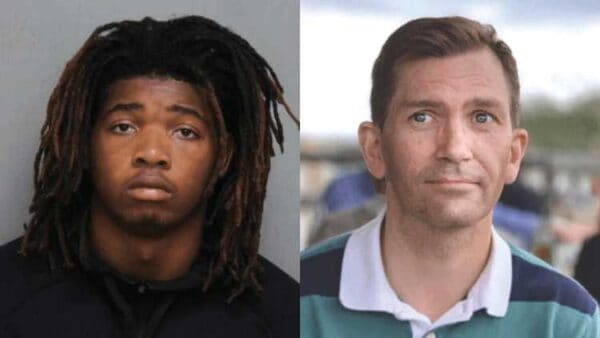 According to testimony, Etute first connected with Smith in April 2021 on the dating app Tinder, with Smith posing as a woman going by the name “Angie Renee.” Along with teammate Da’Shawn Elder, Etute went to Smith’s Blacksburg apartment on April 10 under the assumption that he was meeting a woman. {snip} Both players initially left, but Etute returned to the apartment, and testified that he received oral sex and a $50 gift from Smith.

On May 31, another Virginia Tech player, Jalen Hampton, also connected with “Angie Renee” on Tinder. He, too, went to the apartment expecting a sexual encounter with a woman, but decided to leave after feeling uncomfortable. {snip}

During testimony Thursday, Etute said he entered Smith’s apartment alone — both teammates waited outside and were not charged with a crime — and engaged with Smith on a bed. Etute said he “felt around” and used his cell phone’s flashlight to determine Smith was not a woman. Upon confronting Smith, Etute testified that Smith grabbed at Etute’s genitals, causing Etute to strike Smith in the face with the back of his hand. Etute testified that he then believed Smith reached for a weapon under his bed, causing Etute to strike Smith with a fist several more times.

Etute testified that he stomped on Smith’s face as he departed the apartment, leaving a bloody shoe print on Smith’s cheek in the process. {snip}

Topics: Black on White Crime, Crime, Murder, Race and Sports
< UK Let in a Million Foreign Nationals in a Year for the First Time in Recorded History
Woman With Pistol Killed Man Who Shot at Crowd of People in Charleston >
Blog
Commentary
Videos
Podcasts
Follow us