While technically old news, YouTube has been doing this for months with smaller content creators, but has now started going after bigger fish in the sea. When a content creator on YouTube or “YouTuber” is able to attract large audiences and get substantial viewers, then they are eligible to have advertisements on their videos and get some income. While smaller channels might get peanuts, some YouTubers create content as their full-time job.

Due to the Streisand effect, some of the content that YouTube has attempted to censor has actually become more popular as people start wondering why it was deemed inappropriate.

However a not-so-recent, controversial policy decision by the biggest video-sharing platform sees certain videos deemed too politically incorrect, or not advertiser-friendly, demonetized, meaning the uploader cannot make money off of it.

While he is not in it for the money, the latest victim of this “economic censorship,” as Julian Assange called it, is none other than former U.S. Congressman Ron Paul and his YouTube news analysis channel, the Ron Paul Liberty Report.

Paul’s channel is not the first, but is the biggest channel, to be hit so far. Other channels include that of Diamond and Silk – two black women who strongly support Trump.

However demonetization was apparently only the beginning for edgy content on YouTube. Now the company has started putting videos on a “limited state.”

While many videos and sometimes even entire channels get permanently banned from the platform, some channels have too big of a following to go quietly into the night, so instead of deleting their content, YouTube has decided to effectively shadow ban it.

YouTube videos that are placed in this limited state may not be found via recommended videos. Even searching for a video on a limited state can be tough even if it has hundreds of thousands of views and a very positive like-to-dislike ratio.

The first video to be placed in this digital gulag was one by Jared Taylor. It was certainly controversial, as it discusses subjects such as biological race and IQ. 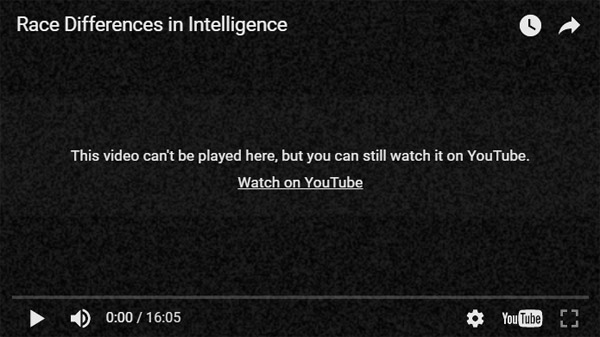 The view when a user tries to play an embedded version of Jared Taylor’s video.

While it might be an uncomfortable subject to some, the video is not a call to violence, it makes no threats of any nature, nor does it advocate anything illegal. It simply puts ideas into the marketplace.

Should one attempt to access the video now, they might only find mirrors of it, as one will need a direct link to access the original.

Topics: AR in the News, Censorship
< Video: Number of No-Go Zones in Sweden Has Dramatically Increased
In Los Angeles, Columbus Day is Toppled Like a Confederate Statue >
Blog
Commentary
Videos
Podcasts
Follow us