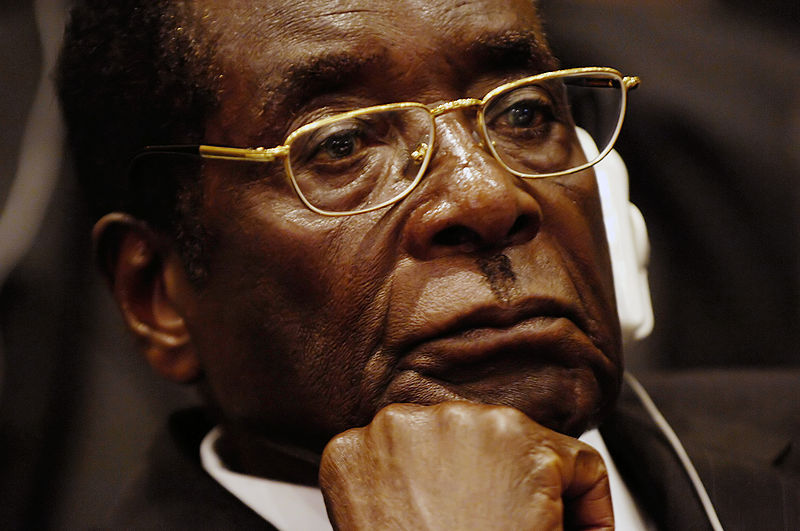 Robert Mugabe has dismissed claims he is a witch after speculation he poisoned the vice president of Zimbabwe with an evil spell.

Emmerson Mnangagwa, 74, had to be flown to South Africa two weeks ago after a severe bout out diarrhoea and vomiting at a rally where the Zimbabwean president was speaking.

Some top officials from Mugabe’s Zanu-PF party believe the man who was seen as favourite to succeed the controversial leader ate poisoned ice cream laid on by the first family.

Robert Mugabe, who has effectively been in power since 1980, has dismissed claims he is a witch after speculation he poisoned the vice president of Zimbabwe

Doctors in south South Africa said they, ‘detected traces of palladium poison which had partly damaged part of his liver’, according to News 24.

But Mugabe rubbished the claims and said: ‘During the armed struggle, we never had weak cadres like what we are seeing today… Now the talk of witchcraft is the order of the day.

Mugabe rubbished the claims and said: ‘During the armed struggle, we never had weak cadres like what we are seeing today… Now the talk of witchcraft is the order of the day

The premier, who has effectively been in power since 1980, said it was normal for people to fall sick.

He also hammered rival politicians in the province of Masvingo for claiming Mnangagwa was poisoned or bewitched, saying: ‘This is not the Masvingo tradition that we know… So if you have your witch doctors who are telling you about being bewitched, down with your witchcraft issues.’

Zimbabwe’s vice president has now returned home from neighbouring South Africa where he was flown for emergency medical care.

With Mugabe, 93, in increasingly frail health, speculation over his successor has focused on Mnangagwa, a veteran regime loyalist.

Mnangagwa’s main rivals within the ruling Zanu-PF come from the younger ‘G40′ group which is thought to back Mugabe’s wife Grace as a potential successor.

The president, who often travels abroad for medical treatment, has refused to name a successor and repeatedly denounced factionalism within the party.

Zimbabwe is to hold elections next year, with opposition parties in talks to try to unite in order to field a single candidate to oppose Mugabe.

Past elections have been tainted by violence and intimidation by ZANU-PF operatives.

It has not been a good month for the first family.

Zimbabwe’s first lady Grace Mugabe appeared in public for the first time Friday since she returned from South Africa where she was accused of assaulting a model and granted diplomatic immunity.

The wife of President Robert Mugabe allegedly attacked 20-year-old model Gabriella Engels with an electrical extension cord at an upmarket hotel in Johannesburg where the couple’s two sons were staying.

Grace Mugabe appeared at the Harare annual agricultural fair, smiling and stopping to chat with exhibitors as she toured stands alongside her husband, an AFP correspondent witnessed.

The Mugabes claim that the injuries were caused in a nightclub brawl, as the first lady of Zimbabwe denies assaulting the model

The first lady, who is also seen as possible successor to her 93-year-old husband, was granted diplomatic immunity by South Africa at the weekend and flew out of the country.

Engels suffered cuts to her forehead and the back of her head during the alleged August 13 assault.

She has opened a police case alleging assault with intent to do grievous bodily harm.

South Africa’s main opposition, the Democratic Alliance, has also approached the courts asking it to declare the immunity ‘wholly without legal merit’ and ‘unconstitutional’.

The party is arguing that Grace Mugabe is not a member of the Zimbabwean government and was visiting South Africa on personal business.

‘There is nothing in either South African or international law which renders her deserving of diplomatic immunity,’ the DA said in a statement.

In 2009, Grace Mugabe was granted immunity in Hong Kong after repeatedly punching a British photographer for taking pictures of her at a luxury hotel.