Éric Zemmour on the Cowardice of French Elites 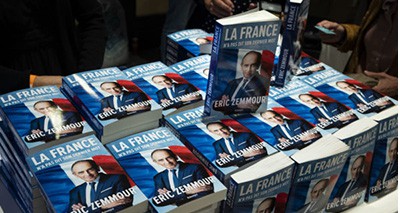 French-Jewish pundit and presidential candidate Éric Zemmour’s latest book, France Has Not Said Her Last Word, is part political diary, part campaign manifesto, and part sociology of the French elite. The book sheds light on Mr. Zemmour’s personality and his brand of French nationalism, but the most illuminating insights are about the social reality of top French political and media figures. We get a powerful sense of why French leaders, especially on the center-right, accept the dissolution of their nation.

When it was published in mid-September 2021, this book became the launch pad for Mr. Zemmour’s presidential crypto-campaign (he officially announced his candidacy by video [English subtitles] only at the end of November). YouTube has “age-restricted” the video, so unlike most YouTube videos, it cannot be embedded:

The case for Mr. Zemmour’s candidacy boils down to two issues:

One could claim that Mr. Zemmour’s successful career as a pundit shows that nationalist voices are not shut down in France, but this discounts how rare it is for right-wing/nationalist journalists to survive professionally and the many obstacles Mr. Zemmour has had to overcome. This book describes the tremendous social, economic, and media pressure nationalists face in France: media demonization, boycott campaigns by advertisers and entertainers, editorial colleagues who try to get one fired, ethnic activist and “anti-racist” NGOs that bring suits for “hate speech,” and the simple desire not to be shunned by one’s social circle.

Mr. Zemmour provides many examples, both in his own life — he has been fired by all media he has worked for, with the exception of Le Figaro newspaper and the TV station CNews — and among French conservatives. His personal success owes much to his ability to appeal to deep, untapped yearnings among the French.

The story of the book itself is interesting. Mr. Zemmour’s usual editor Albin Michel refused to publish it, even though many of his previous books were bestsellers. The editor explained that Mr. Zemmour “is engaged in a personal ideological battle which simply does not correspond with the editorial line of a generalist publishing house like Albin Michel.” Mr. Zemmour had to self-publish via Rubempré, his own imprint, named for one of Balzac’s characters. Unlike most self-published titles, the book is available in bookstores. A supporter of Eric Zemmour waits for a signature after a meeting at the Zenith venue in Rouen, north western France, on October 22, 2021. (Credit Image: © Maxppp via ZUMA Press)

The cover illustration almost conveys the idea that Mr. Zemmour is a “French patriot, already president.” Even so, in just a few weeks, the book had reportedly sold 165,000 copies. Albin Michel lost out, but Mr. Zemmour is doing very well, however a disadvantage of self-publishing is embarrassing typos.

The book’s introduction makes the most explicit arguments for Mr. Zemmour’s decision to run: “Not a day goes by without a provocation, without a deconstruction, without a mockery, without a destruction.” (p. 8) There follows a long list: attacks on the police, the spread of wokisme in academia (new PhD theses on “gender theory in 17th century Limousin”), cancellation of classic films and culture, removal of statues of Napoleon and other heroes, violent Muslim gangs (North-African, Chechen, Kosovar), no-go areas, and grisly terrorism. The most fundamental issue, however, is immigration. Mr. Zemmour says of The Great Replacement:

This vital identitarian question renders all other questions subsidiary, even the most essential such as education, industry, social protection, or the place of France in the world. I am sure that no candidate — not even Marine Le Pen — will dare to evoke this identitarian and civilizational quarrel in the campaign. (p. 24)

While Marine Le Pen is a staunch opponent of non-European immigration, she accepts the line on The Great Replacement. In 2014, she agreed that it is a “conspiracy theory,” and in 2019 she claimed she “didn’t know about” the concept. The Great Replacement is a standard idea in nationalist circles and Miss Le Pen has shared the stage with Renaud Camus, who coined the term. Sept. 24, 2015 – Renaud Camus at a demonstration in front of the German Embassy in Paris to protest the migratory hordes sweeping over Europe. (Credit Image: © Maxppp via ZUMA Press)

Mr. Zemmour thought that his success as a journalist would change French politics. His 2014 Le Suicide français — a chilling description of French decay since the 1960s — had sold over 200,000 copies but seemed to have little political effect. To Mr. Zemmour’s surprise, no conventional politician adopted his ideas. He amusingly calls his naïveté “Gramscism for dummies.” Many people — his son, opponents to gay marriage, French Trump supporters — urged him to run for office. He hesitated, fearing that politics would ruin his career but, at age 63, it is now or never.

The book’s introduction recounts Mr. Zemmour’s meetings with the two other then-plausible anti-immigration candidates: conservative party leader Xavier Bertrand (who since has failed to win his party’s nomination for the presidency, losing to the moderate “conservative” Valérie Pécresse) and Marine Le Pen. Mr. Bertrand listened attentively to Mr. Zemmour’s proposed policies on immigration, and did nothing.

To Miss Le Pen, Mr. Zemmour argued that “the System” — a dissident term he uses several times — wanted her to reach the second round in the presidential election in order for her to lose again to Emmanuel Macron. She seemed almost self-pitying: “Look at me. I am alone, I no longer have a personal life.” (p. 23) 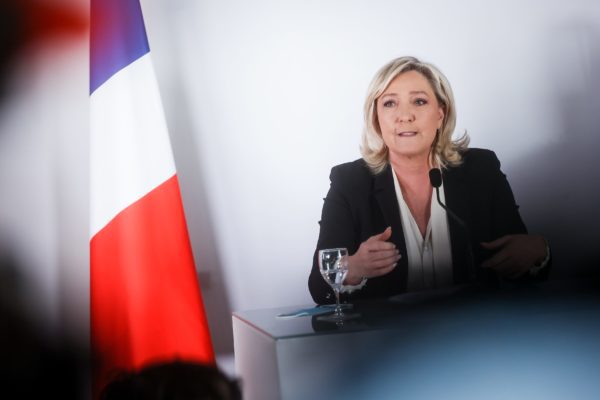 Readers have complained that Mr. Zemmour’s book is in large part a diary of his many dinners with various media-political personalities. There is a common pattern:

Mr. Zemmour also writes of a meeting with left-wing university professor Pascal Blanchard, who has profited as a communications consultant developing “de-colonial” and “anti-racist” advertising for large corporations. After losing a debate with Mr. Zemmour, Mr. Blanchard reportedly said, “You can say what you like. We don’t give a damn. We’ll win. We control the school programs.” (p. 120)

Whatever the limits of his anecdotal approach, Mr. Zemmour’s strength is as a journalist and pundit, and a general picture emerges: a real sense of the social world in which right-wing politicians and journalists operate, and how this limits them, especially on immigration. As individuals and as members of families or wider social circles, they fear stigma.

The most compelling example is that of Nicolas Sarkozy (president of France, 2007–2012). Mr. Zemmour faults Mr. Sarkozy for not campaigning on immigration. He could have promised a referendum on the issue, as his advisor Patrick Buisson suggested. Polls indicated, as they do today, that this was a winning issue. Mr. Zemmour believes that a major part of Sarkozy’s weakness on immigration was the influence of his wife Carla Bruni, a left-wing Italian singer. Mr. Sarkozy married her after his first wife Cécilia left him during the 2007 presidential campaign. Another important factor was Mr. Sarkozy’s relationships with rich Arabs. Mr. Zemmour writes:

[In not campaigning on immigration,] Sarkozy thinks no doubt of Carla, and of her bien-pensants [well-thinking] friends; of his trips to Morocco, in the lavish setting of La Mamounia, as a guest of the king; of his well-remunerated lectures which his friend, the prince of Qatar, has promised him. . . . Sarkozy already sees the newspaper headlines calling him a racist, a xenophobe, or, worse, a politician prepared to do anything to stay in power . . . . Sarkozy was not able to give up what he was, the image that he had of himself, in the eyes of his social circles, of those close to him, and of the media, to do what his interest and the national interest called for. (p. 157)

Mr. Zemmour believes the fear of stigma, financial loss, and hostile media coverage kept Mr. Sarkozy from doing what was both in his political interest and the national interest. It is impossible to listen to Mr. Zemmour’s speeches without learning something about history, and he peppers his talks with quotations from great Frenchmen. He is a romantic who reads widely and takes the inspiring stories of history and politics at face value. This makes his encounters with real politicians, bureaucrats, and “influencers” in their day-to-day shabbiness all the more shocking to him.

Mr. Zemmour once dined with Daniel Keller, the head of the Grand Orient Masonic lodge, an organization of legendary influence, and was flabbergasted by the man’s politically correct platitudes:

Our host’s conversation was as mediocre and insipid as the food we were served. . . . I thought I would be locking steel with Jules Ferry [an important 19th century politician] but I was sparring rubber with Daniel Keller. Once again, my historical imagination had played a trick on me. (pp. 181–82)

Mediocrity of this kind is no doubt the norm in the West.

Mr. Zemmour thinks France and the West are reaching the end of a long cycle, as individualism approaches a climax of selfishness. He rejects those who think “politics” means ever-greater emancipation from social constraints:

I have always thought on the contrary that politics means trying to preserve what our ancestors have built: this masterpiece called France, to pass it on to those who will follow us on this earth. (p. 183)

Mr. Zemmour argues that just as the printing press broke the spiritual monopoly of the Catholic Church and led to the Protestant Reformation, the internet has broken the monopoly of the media and heralds a new age of populist politics whose ultimate results remain uncertain.

Mr. Zemmour’s vision is a return to the French tradition of statecraft, respect for the nation-state, charismatic and plebiscitary executive power, and a cross-fertilization between literature and politics. This would be a synthesis of French monarchic, Napoleonic, and Republican traditions. Some may say that Mr. Zemmour’s outlook overlooks the vitality and diversity of France’s regions and neglects the pan-European heritage of our civilization. Nevertheless, I agree with de Gaulle, that Europe has shined brightest when each nation expressed its unique vitality to the fullest.

But what about Mr. Zemmour’s ability to get things done? He believes in firm control of the state and being able to move a nation with appeals to its most powerful myths, often unconscious. In practice, Mr. Zemmour hopes, through a presidency empowered by direct appeals to the people, to battle the special interests that are paralyzing and in some cases destroying France.

What are Mr. Zemmour’s prospects? There is an advantage in our rulers’ mediocrity: They are unprepared for anything that contradicts their shallow and intolerant ideology. Even an articulate bookworm may therefore become king.