If enough people say something often enough, it becomes “true.” Big media and people at the highest levels of government now accept that the Capitol takeover of January 6 was an “armed insurrection” by “white supremacists.” A few eccentrics wonder how you can have an “insurrection” with no plan and no weapons, but virtually everyone has swallowed the story about “white supremacists.”

As for “insurrection,” even the Republican lawyer Michael van der Veen, who defended Donald Trump in his second impeachment trial, said something MSNBC called “obvious”: “The question before us is not whether there was a violent insurrection of the Capitol. On that point, everyone agrees.” Senator Ron Johnson of Wisconsin is one of a very small number of politicians who doesn’t. He pointed out that the mob wasn’t armed, and that a three-hour occupation is not an “insurrection.” Media ridiculed him, with an MSNBC contributor writing, “Let’s take a minute to unpack this, because while I tend not to expect much from Ron Johnson, this is extraordinary, even for him.”

An indignant CNN articled listed the “arms” the “insurrectionists” used: “a baseball bat, a fire extinguisher, a wooden club, a spear, crutches, a flagpole, bear spray, mace, chemical irritants, stolen police shields, a wooden beam, a hockey stick, a stun gun, and knives.” Not even comic-opera coup-plotters in Upper Volta or Rio Muni would try to overthrow a government with bear spray and pocket knives.

One of the few journalists who scoffs at the “armed insurrection” tale is Glenn Greenwald. He writes: We know that “no Trump supporter fired any weapon inside the Capitol and that the FBI seized a grand total of zero firearms from those it arrested that day . . . .” He adds that there were “no known cases of the rioters deliberately killing anyone,” and “no evidence anyone intended to assassinate Mike Pence, Mitt Romney or anyone else.” Why the drumbeat about “armed insurrection”? Mr. Greenwald argues that “the more you can demonize your opponents as something monstrous, the more political power you can acquire,” and that Democrats warn about an attempted coup “because declaring an ‘armed insurrection’ empowers the state with virtually unlimited powers to act against the citizenry.” So far so good, but Mr. Greenwald is silent about who the rioters were and what they wanted.

Others had that figured out almost before the tear gas had cleared. Joe Biden pegged the rioters as “a bunch of thugs, white supremacists, domestic terrorists.” It would be tedious to list even just a few of the press articles that blamed the riot on white supremacy, but I will be tedious.

The FBI launched a massive manhunt for these white supremacists. There have been 275 arrests, and several outlets have written about who the rioters were, but no one has looked into them more carefully than staff at the Program on Extremism at George Washington University (GWU). Last week, it issued a report called “This is Our House!” which looks into 257 people who have been arrested and indicted. The smallest number — 33 — are said to have been members of “militant networks,” or what the report also calls DVE (Domestic Violent Extremist) organizations. They are “alleged to have planned in advance to breach the Capitol and, in many cases, conduct violence inside the walls of the building.” These so-called DVEs are the Proud Boys, the Oath Keepers, and the Three Percenters (aka “III%ers”). Five members of the Proud Boys have been charged with criminal conspiracy in connection with the riot, as have nine Oath Keepers.

What will eventually come of these cases is anyone’s guess, but an FBI spokesman explains that conspiracy charges are “an entry point to investigate white nationalist groups [emphasis added] long on law enforcement’s radar, allowing for a review of finances, communications and affiliations.” In other words, these are fishing expeditions that will poke into every detail of the organizations, reveal members and contributors, and probably put the groups out of business — even if the conspiracy cases later collapse in court.

None of these groups is “white nationalist” or has any racial orientation at all. The leader of the Proud Boys is Enrique Tarrio, a black Cuban who was in Latinos for Trump. As he says, “I’m pretty brown, I’m Cuban. There’s nothing white supremacist about me.” This does not stop the Wikipedia entry on the group from starting with: “The Proud Boys is a far-right, neo-fascist, and male-only white nationalist organization.” As for the Oath Keepers, all members have had a job — mostly as peace officers or soldiers — in which they swore to “defend the Constitution against all enemies, foreign and domestic.”  Not even the Southern Poverty Law Center can bring itself to call them “racists.” It’s leader, Elmer Rhodes, says he started the group when it occurred to him that if German soldiers and police had refused to follow orders, they could have stopped Hitler. The Three Percenters are similar to the Oath Keepers in opposing what they see as unconstitutional federal power, but with an even heavier emphasis on the Second Amendment. The group denounced the 2017 Unite the Right rally in Charlottesville, saying, “we will not align ourselves with any type of racist group.” April 27, 2019 – Indianapolis, Indiana – A member of the III% militia does security during the Pro-Freedom rally at the Indiana Statehouse during the during the third day of the National Rifle Association convention being held nearby. (Credit Image: © Jeremy Hogan / SOPA Images via ZUMA Wire)

The GWU report warns about “white supremacist” and “neo-Nazi” groups without specifically naming any. In an article on arrests at the Capitol, NPR idiotically called all three groups — Proud Boys, Oath Keepers, and Three Percenters — “self-described Nazis and white supremacists.” This is American journalism: Call any conservative white man a Nazi.

The second category of rioters in the GWU report is “organized clusters,” which are simply people who travelled together to Washington DC to take part in the Stop the Steal demonstration. If two friends or a husband and wife were arrested, they were an “organized cluster.” “Inspired believers” — the expression makes them sound vaguely unhinged — are just individuals.

Even if the 33 members of “militant networks” really did want to break into the Capitol building, they carried no firearms and had no plan. By the report’s own count, they were only 12.8 percent of the people arrested, and “many of the individuals responsible for storming the Capitol were brazen opportunists who took advantage of the unrest to enter the building and achieve personal or political objectives, despite lacking a well-devised plan to do so.” No well-devised plan? They had no plan at all. They walked in once the doors were open.

As if one needed any more evidence that this was not an “insurrection,” the report says 47 percent of the 257 arrested and charged were tracked down because they posted about the fun they had on social media. They will surely be the most bumbling, witless rabble ever to go down in history as an “insurrection.” What about white supremacy? Of the 257 people charged, the report can find circumstantial evidence of “hate” for only two. Kevin Seefried is the man who carried a Confederate flag, but the report says only that he is a Trump supporter who flew the flag on his Delaware property. I have been unable to find anything else about his politics. The other “hater” is Robert Packer of Newport News, Virginia, who wore a “Camp Auschwitz” T-shirt. What are his politics? No one seems to know.

With obvious regret, the report concludes that the main motive of the rioters was “a desire to prevent the certification of the electoral votes for the 2020 Presidential Election.” The report quotes defendant William Calhoun of Atlanta: “The crowd was of one mind. Everybody there had the same attitude. They felt they had been robbed of a fair election and the Congress wasn’t listening to them.” If the crowd had been howling for segregated schools or restrictive covenants, I suspect we would have heard about it.

So far as I know, not one media outlet that was in a panic about white supremacy has admitted it was wrong. And just last week, Sen. Judiciary Committee Chairman Richard Durbin explained that “the insurrectionists on January 6 are the latest incarnation of violent white supremacist movements that have terrorized fellow Americans on the basis of their race, religion and national origin for more than 150 years.” He also cited a department of Homeland Security finding that white supremacy is “the most persistent and lethal threat in the homeland.” On the other hand, media have been quick to correct a different theory about the riots. They quickly slapped down the idea that antifa in MAGA hats might have started the violence:

NPR’s crack reporting job was called “Antifa Didn’t Storm the Capitol. Just Ask the Rioters.” How about asking the rioters if they were “white supremacists”?

It’s touching that the media are so quick to defend the good name of the one group in America that might really be what the GWU report calls “violent domestic extremists,” but it’s just another example of applying the rules of good journalism — and the law — selectively.

Countless BLM rioters have had charges dropped, and the good fortune of rioters in Portland, Oregon is just the most recent case. Local authorities had been so unwilling to bring charges that the feds made arrests. However, with the change in administration, local media report that: “The Department of Justice has dismissed more than one-third of riot cases stemming from last summer’s violent protests in downtown Portland, including felony assault of federal officers. Many more dismissals are expected.” 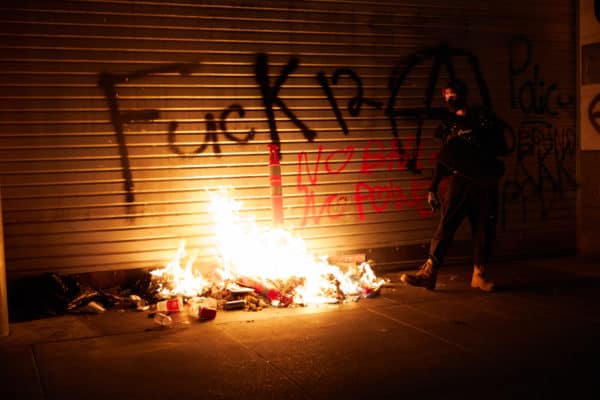 The DOJ is handling the Capitol riot a little differently. Michael Sherwin, U.S. Attorney for the District of Columbia, says, “‘The scope and scale of this investigation and these cases are really unprecedented not only in FBI history, but probably DOJ history.” The FBI posted electronic “wanted” photos on the sides of bus shelters in Washington, DC and other cities, and in just two weeks got more than 200,000 tips. The bureau has taken hundreds of specialized agents off their usual jobs, now considered less important than catching trespassers: securities fraud, public corruption, drugs, and gangs. The FBI arrested a New York City man after an investigation “that involved the FBI, two city agencies, surveillance footage, a Telegram account, and license plate readers on toll roads in New Jersey and Maryland.” Have the authorities put even half that effort into catching BLM rioters who set fire to stores or assaulted police officers?

And why, in spite of the evidence, are so many people determined to blame the Capital riot on white supremacy? I suspect it’s for the same reason Glenn Greenwald gave for insisting on calling the riot an “armed insurrection”: Blaming this highly publicized event on white supremacy makes it much easier to justify repression against anyone who has ever been accused of white supremacy. As I noted above, the GWU report’s “domestic violent organizations” have no racial orientation at all, but are still “white supremacist.” The two that face conspiracy charges will probably be destroyed.

Blaming the Capitol takeover on “white supremacy” will no doubt be a justification for surveillance and harassment of any racially dissident organization or person. It could even lead to laws that ban “white supremacist” speech. Private companies are already actively suppressing speech with which they disagree. A climate is building in which our government could join them.

Jared Taylor is the editor of American Renaissance and the author of Paved With Good Intentions, White Identity, and If We Do Nothing.
< Judas and the Black Messiah: Pitch Perfect Propaganda
Axe-Wielding Attacker in Sweden of Afghan Origin >
Blog
Commentary
Videos
Podcasts
Follow us