Coronavirus and the Greatest Conspiracy Theory of All 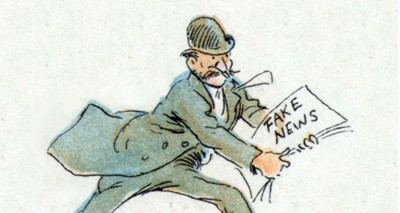 There are two contradictory media messages about the virus: First, we don’t know much about it. Second, we cannot let certain people talk about it. White advocates aren’t surprised by this approach, because it’s how the media cover race.

Basic questions about the virus remain unanswered. The New York Times ran a column by Charlie Warzel telling us we still don’t know where the virus came from, the way it spreads, or whether we can trust data from China. “We Still Don’t Know How the Coronavirus Is Killing Us,” reported New York magazine about two weeks later. Symptoms, mutations, treatments, and why some die and others don’t remain mysteries. The ferocious attack against President Trump for a supposed ventilator shortage, waged among others by the New York Times, CNN, Vox, and The Daily Beast, may have been pointless because ventilators are of “unclear benefit to COVID-19 patients.” You can wear “social distancing hats” to keep people at a distance, but if one MIT researcher is right, the virus can spread 27 feet. “[The disease] can attack almost anything in the body with devastating consequences,” said Yale’s Harlan Krumholz in Science, so doctors don’t know how to fight it.

These questions have answers. Finding them requires money, intelligence, and time. Dr. Krumholz is right to say the disease is “humbling” because of its ferocity and complexity. Does the virus or your body’s immune response kill you? We don’t know. Was it man-made? We don’t know. Are people who have recovered immune? We don’t know. Is a vaccine even possible considering that the virus is reportedly mutating? We don’t know. Nonetheless, some journalists do know who should and should not be allowed to debate these questions, and they know exactly what to do: censor.

“[W]hile Facebook, Google, LinkedIn, Microsoft, Reddit, Twitter and YouTube issued a joint statement and pledged to work together to combat misinformation,” said Forbes, “it continues to spread as fast as the actual coronavirus.” Author Peter Suciu said social media platforms are “under pressure to address the spread of false news and misinformation, but now the situation seems to be getting worse, not better.” Joan Donovan, “Director of the Technology and Social Change Research Project at Harvard University’s Shorenstein Center,” is frustrated that “conspiracy theorists” can defy censorship by exploiting a “loophole” and linking to archived pages. “Perhaps the most alarming element to a researcher like me is that these harmful conspiracies permeate private pages and groups on Facebook,” writes Dr. Donovan. Such groups allow people to discuss “misinformation” without “journalists, independent researchers, and public health advocates” supervising them. She calls for social media companies to combat misinformation and “create a protocol for strategic amplification that defines successful recommendations and healthy news feeds as those maximizing respect, dignity, and productive social values.” They will push certain ideas and suppress others.

“Internet Speech Will Never Go Back To Normal” warn professors Jack Smith (also of Harvard) and Andrew Keane Woods in The Atlantic. They argue America already is under “digital surveillance and speech control” like that found in China. It’s just done by huge tech companies rather than by the government.

This isn’t news to us. And Messrs. Smith and Woods think this is just fine. “Greater surveillance and speech control” is “undeniable and likely inexorable.” The pandemic is simply accelerating what was already happening. “China was largely right and the United States was mostly wrong,” they add. “Significant monitoring and speech control are inevitable components of a mature and flourishing internet, and governments must play a large role in these practices to ensure the internet is compatible with a society’s norms and values.”

“The First and Fourth Amendments as currently interpreted, and the American aversion to excessive government-private-sector collaboration, have stood as barriers to greater government involvement,” they continue. “Americans’ understandings of these laws, and the cultural norms they spawned, will be tested as the social costs of a relatively open internet multiply,” with COVID-19 a “window into these future struggles.” I give the authors credit for honesty. Prepare for even more censorship.

But what is objective reality? What’s the difference between “misinformation” and “science” or between “society’s norms and practices” and “harmful conspiracies?” When authors use the coronavirus as an excuse to boost “productive social values,” I suspect they want to police our ideology, not protect our health. And if ordinary people are too stupid to tell fact from fiction, why let them vote? Shouldn’t we scrap “our democracy”? “Freedom of Speech” by Norman Rockwell

Even if we did scrap democracy, why should the media be the new philosopher-kings? They drink too much, can’t control their emotions, and their brains don’t work very well. That’s not my judgment; it’s from a study, and I trust science.

Of course, one poll doesn’t establish truth or “science.” However, during this pandemic, we’ve seen breathless reporting based on skimpy data. For example, many journalists slammed President Donald Trump for mentioning that hydroxychloroquine could be a treatment. While President Trump’s freewheeling style isn’t helpful right now, he didn’t make this up. Doctors around the world said it was the most effective treatment available. One black Michigan Democratic state representative credited the drug (and the president) with saving her life.

When a man died and his wife was hospitalized after ingesting pool cleaner chemically related to hydroxychloroquine, the New York Times and NBC News linked this to President Trump. Later, the Washington Free Beacon discovered the wife was a Democrat donor to a “pro-science PAC,” not someone who would just take President Trump’s word.

Late last month, President Trump vaguely referred to testing whether UV light or disinfectants in the body could help. This led to a deeply stupid controversy with experts warning us not to drink bleach or blast ourselves with UV rays. Time magazine ran a story on April 24 called, “Trump’s Comment on Disinfectant Prompts Experts to Warn Against Inhaling Bleach to Kill Coronavirus.” Besides helpful advice about not inhaling toxic chemicals, Time told us that “The World Health Organization has warned against using UV lamps to sterilize any part of the body.” Thank goodness we were warned in time.

The very same day, Time came ups with this cheerful clickbait title, “Meet Violet, the Robot That Can Kill the Covid-19 Virus.” “UV-C light is a long-established disinfectant in health care settings,” Time said. We can be grateful President Trump hasn’t mused about Violet, the Robot.

Some news sounds like fake news but isn’t. Generally, smoking is bad for you. However, a French study found smoking may offer protection from the virus, though smokers who caught it had worse symptoms. The explanation is that nicotine may block the virus from entering cells. Thus, there is a study underway to see if nicotine patches may help. France has already banned online nicotine patch sales for fear that people will start hoarding. Most people don’t get past the headlines, so some could start smoking in the hope of avoiding coronavirus. I can imagine more people doing this than drinking bleach, so it might make more sense to suppress this news about nicotine to prevent people from smoking. However, there is no such campaign. In fact, countless outlets seem to have sensationalized it, probably because it can’t be used to smear President Trump.

Does the drug remdesivir fight the virus? The stock market soared Wednesday after preliminary results suggested it might. Dr. Anthony Fauci said that “what it [the study] has proven is that a drug can block this virus.” However, results from a different study were “inadvertently” posted on the World Health Organization’s webpage just last week, showing that the drug failed. What really works? We don’t know. The FDA approval process for new drugs is slow because it takes time to get answers. Anthony Fauci and Donald Trump during a coronavirus update briefing Sunday, March 29, 2020, in the Rose Garden at the White House.

In some respects, we don’t know that much more than our ancestors who prescribed leeches or bleeding. Many common drugs have an “unknown mechanism of action,” meaning no one knows why they work. When a publication like Salon insults Laura Ingraham by calling her a “hydroxychloroquine truther,” it turns a complicated medical question into a political litmus test. Journalists shouldn’t make such judgments. I would not trust a journalist to interpret a photograph, let alone results from clinical trials.

We do have decades of research and countless studies that confirm certain other scientific facts: In the United States, there is a persistent pattern of racial differences in IQ and test scores, income, and other measures.
These differences are facts. People can claim race is a social construct, that intelligence can’t be measured, or that IQ tests are biased. They can say we should ignore all differences in the name of the greater good. They can blame malnutrition, racism, poverty, the Constitution, or schools. But they can’t deny the data. Ban every “racist” book, website, conference, or organization, and the data will still exist. You can even mandate by law that the races must
be equal or face stiff penalties. (No Child Left Behind Act did just that.) It won’t make it so. These differences matter, and we should be able to talk about what causes them. In 2014, even Slate wrote this about IQ:  “Above all, the policies of public and private organizations should be based on evidence rather than ideology or wishful thinking.” Could Slate publish that today? Probably not.

“That a proposition for which there is no evidence can have become dogma is one of the mysteries of our time,” wrote Jared Taylor in 1992. Today’s dogma is that all these differences (oddly, including high Asian achievement) is somehow due to “white privilege.” According to this theory, whites are racist no matter what we do or say. Racism explains inequality. Racism must explain inequality because no other explanation is permitted. The more our society changes to foster equality, the more things we discover that are “racist.” There is no end to this process. I smell a conspiracy theory. “White privilege” is unfalsifiable. If you deny its existence, you are part of the conspiracy. I believe this white-privilege conspiracy theory is misinformation. It spreads hate between races and shames whites. I think it’s partially responsible for why whites commit suicide, and why they feel frustrated and alone. It’s why leftists are driven to violence, why some blacks feel justified in committing crimes, and why some political leaders celebrate our replacement. It’s why many whites are desperate to be some other race.

Despite this, I would still let those who spread this misinformation speak, if they extend the same right to me. Many would not. Unfortunately, they possess power and we don’t. The world isn’t the way we want it to be; it just is. We must have the courage to confront it.

This is cause for hope as well as grief. In a biased, media-saturated culture, we can still get to the truth. When it comes to race, I don’t have to keep up an illusion. I don’t have to fear reality, deceive myself, or silence my opponents. How many journalists can say the same?

Mr. Hood is a staff writer for American Renaissance. He has been active in conservative groups in the US. You can follow him on Gab.
< Michelle Obama Is Mad at ‘Our Folks,’ Not Trump Voters: ‘That’s My Trauma’
Coronavirus is Making the Case for Black Reparations Clearer Than Ever >
Blog
Commentary
Videos
Podcasts
Follow us