Throw the Bums Out!

The Supreme Court has ruled 5 – 4 that the Trump Administration can deny green cards to non-citizen “public charges,” that is to say, foreigners who are on welfare. The administration enacted the public charge rule last October, but a lower court had issued an injunction against it.

The Department of Homeland Security’s new rule applies to temporary non-citizen residents (such as guest workers and students) — people who are already here but have to adjust their status in order to stay. Thanks to this court decision, the DHS rule takes effect immediately.

The State Department will apply a similar rule to foreigners who want to come to the U.S., but due to bureaucratic delays, it won’t take effect until October. The upshot is that both State and DHS will be better able to keep out non-citizens who would become public charges and deport non-citizens who already are.

Since 1882, legislation has let the government exclude foreigners on the dole, but the Clinton Administration declared that this applied only to non-citizen residents who get “cash benefits” or foreign visa applicants who are likely to get them. They could get all the non-cash handouts they liked — Medicaid, SNAP, federal housing assistance — and still not be considered public charges. This policy was largely the work of then-Immigration and Naturalization Services director Doris Meissner, who is now a senior fellow at the George Soros-funded Migration Policy Institute. 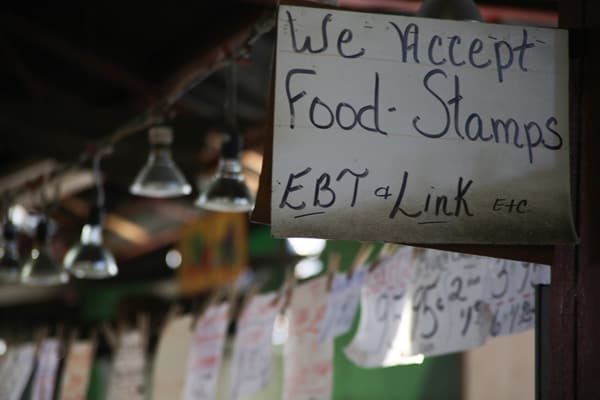 When DHS decides whether to give someone permanent residency, it can exclude anyone (except refugees) who was on assistance of any kind for more than 12 months in any three-year period.

The State Department’s new rule assesses a foreign applicant’s likelihood of being a public burden based on age (18 – 62 is preferred), income/assets, health, family status (whether he has family members in the U.S. who can support him), education, and skills. The department likes for an applicant’s gross annual household income to be at least 125 percent of the federal poverty level, though this is still bordering on poor. The new rules mean that indigent family members of legal US residents who try to come here through family reunification are more likely to be denied.

“If they don’t have future prospects of being legal permanent residents without welfare, that will be counted against them,” U.S. Citizenship and Immigration Services acting director Ken Cuccinelli has said.

This is shameful. America shouldn’t have a wealth test for admission. It’s a place where millions of people are descendants of immigrants who came w nothing & made a life.

The American Dream isn’t a private club with a cover charge – it’s the possibility of remaking your future. https://t.co/qKm7BuUhXI

Give me your tired, your poor,
Your huddled masses yearning to breathe free,
The wretched refuse of your teeming shore.
Send these, the homeless, tempest-tost to me,
I lift my lamp beside the golden door! https://t.co/su9MCpbejz

My father came to America at 17 without a nickel, speaking no English. He grew up to be the proudest American you ever saw. Trump’s policy is disgraceful. It is not what America is about. We will defeat him and end his demonization of immigrants and the poor. https://t.co/MibtwOTzEL

Liberals are right to worry. Millions of non-citizen residents are suddenly ineligible for green cards. In August, the Migration Policy Institute reported that 47 percent of noncitizens could feel the “chilling effects.” “Approximately 16.4 million people live in benefit-receiving families with at least one Latino noncitizen and 3 million live in such families with at least one [Asian American/Pacific Islanders] noncitizen,” the report said.

If anything, the MPI may be understating the impact. The Center for Immigration Studies estimated that “63 percent of households headed by a non-citizen used at least one welfare program.” President Trump could now deport these otherwise legal residents, but that would take a lot of political willpower.

An added benefit of this Supreme Court decision is that it could dissuade lower courts from issuing national injunctions on immigration policy. In his concurring opinion, Justice Neil Gorsuch wrote that injunctions of that kind make it “hard to see how the court could still be acting in the judicial role of resolving cases and controversies.” It goes beyond a court’s powers to tell the Executive how to run immigration policy.

The Trump administration has already sharply increased visa denials for fear that a non-citizen would become a public charge. For the ten months of October 2018 to July 2019, the State Department rejected 12,179 visa applicants for this reason. Barack Obama’s department rejected only 1,033 applicants for public charge reasons during all of fiscal 2016.

The White House also wants to deny visas to immigrants who can’t pay for medical insurance. The MPI estimates that 65 percent of people who want to come could be barred. A federal judge blocked the Trump Administration from enforcing this plan — for now.

Recently, the State Department announced it was also cracking down on “birth tourism,” or pregnant women traveling to America to deliver new “Americans” courtesy of “birthright citizenship.” Birthright citizenship should be banned entirely, but this is a step in the right direction.

President Trump is often disappointing, but he’s far better than the alternatives. If Congress won’t pass patriotic immigration reform, it’s encouraging that the White House is finding its own ways to do it.

Robert Hampton is a contributing editor at American Renaissance. He is a Middle American who chose to wake up.
< Mike Bloomberg Speaks the Truth About Race and Crime
You Have No Right to an Identity >
Blog
Commentary
Videos
Podcasts
Follow us