On Cynicism and Faith

The attack on the Covington Catholic schoolboys was a ritual. It featured ceremonial language, sacred songs, and a Manichean conflict between good and evil. For millions of Americans, a petty encounter between an American Indian activist and a nonplussed Catholic schoolboy represented powerful archetypes of Oppressed and Oppressor that have been drilled into the public consciousness. The campaign against the “MAGA teenagers” by leftists was not a protest against injustice, but an act of faith — and because it was fundamentally rooted in myth, the faithful will not be persuaded by facts.

Most media outlets refer to the man who sparked the confrontation, American Indian activist Nathan Phillips, by the quasi-sacred title of “Native American elder.” More accurately, Mr. Phillips is a liar. He was not surrounded by a hostile mob chanting “build that wall.” Instead, he approached students already besieged by racist taunting from the Black Israelite cult and began chanting and banging a drum inches from a boy’s face.

If it a white person did something like that, it would be called racist intimidation. However, normally cynical reporters have fallen into sentimental foolishness. Online publication Heavy told its readers that Mr. Phillips is keeper of a “sacred pipe.” In a piece called “The Power of Nathan Phillips’s Song,” Vogue’s Rebecca Bengal claims he sang a “song of strength and courage — a gift.” One viral tweet echoed by other accounts praised Mr. Phillips for his “healing song.” It’s unclear whether the song is a tribute to the “great Spirit,” as American Indian Movement member Leonard Peltier claims, or whether it has no words at all, as Mr. Phillips has reportedly said. He may have just been muttering. 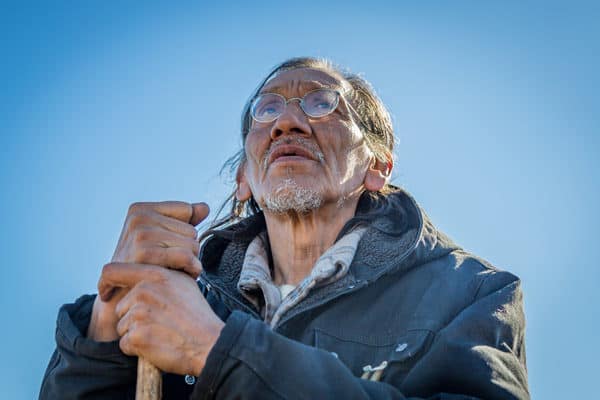 Mr. Phillips’s supporters made much of the alleged lèse majeste by the students against a “Vietnam Veteran,” a status Mr. Phillips has falsely claimed.

“I’m a Vietnam Vet. I served in Marine Corps 72 to 76. I got discharged May 5, 1976. I got honorable discharge and one of the boxes shows peacetime or, what my box says is that I was **in theater**.  I don’t talk much about my Vietnam times.” pic.twitter.com/nIoYxGoPqM

He has also claimed to be a “recon ranger;” there is no such thing. However, media are still running cover for Mr. Phillips, with Savannah Guthrie of NBC suggesting Mr. Phillips had never claimed he was a Vietnam Vet.

The truth is that Mr. Phillips is a charlatan with a criminal record and a career of exploiting ethnicity to gain media sympathy. In 2015, Mr. Phillips made utterly unsubstantiated accusations of racism against white college students. Now, Mr. Phillips claims the media attention is “unwanted,” but he spent days after the incident looking for confrontation. He and his fellow protesters even tried to disrupt a Catholic Vigil Mass, which makes us choke on media complaints about the insufficient respect the Covington boys showed towards his “healing song” and “sacred pipe.” Initially, Mr. Phillips wanted the students expelled and refused to meet with them. Now, he says he “forgives” them, an act of fabricated magnanimity he credits to having attended a “traditional prayer ceremony.”

Mr. Phillips thinks he is in a position of moral authority even though his lies were exposed. Journalists agree. Even if the story was all wrong, the larger Myth about noble people of color confronting white racism remains unshaken, and the white students have a perpetual duty to apologize. Thus, after student Nick Sandmann refrained from groveling in an interview, the lack of an apology from the “MAGA teen” was itself newsworthy:

As Jared Taylor noted in a video about the incident, “contrition” is the only acceptable sentiment for a white facing a non-white.

Mr. Phillips may end up lecturing the students about their moral faults. Journalists appear to be urging such a solution. Father James Martin of America magazine wants the students to make a “service trip” to a “Native American reservation.”

Covington Catholic was closed for a day because of threats against the students, and both school and Church have been on the defensive since the beginning. First, they condemned their own students, and the Bishop of Covington reportedly wanted the students to stop defending themselves in the media. There is not the faintest outrage against Mr. Phillips for his lies and his attempt to insult the Mass. The supposed affront to the swindler Mr. Phillips angers these priests far more than blasphemy.

Anti-racism is a fully developed faith that holds whites are irrevocably damned because of “privilege,” regardless of their beliefs or actions. Smiling, wearing a MAGA hat, or failing to shuffle out of the way of a person of color is sin, a failure by whites to atone for their blood guilt. Thus, even Trump supporters who sincerely believe they are not racist are regularly accused of racism. “[MAGA enthusiasts] see the history of the world as a competition for dominance, with white people as the rightful, if unrecognized, winners,” writes Douglas Rushkoff in CNN in a piece supposedly intended to explain entrenched opinions. “They see young men righteously, if a little indignantly, defending their race and civilization against leftist social warriors and the forces of political correctness.”

Though this is pure projection, the eagerness to read mythic significance into racial confrontations explains a great deal of contemporary American culture. The murder of a black youngster Jazmine Barnes was a media sensation when a white man was the suspect; after a black man was arrested, it became insignificant. The deaths of illegal immigrants trying to break into Europe or America are exploited to promote open borders; the deaths of Westerners at the hands of illegals have no larger meaning. Even petty incidents, like posting a politically incorrect flyer, can spark hysteria at colleges or in entire communities.

The late Lawrence Auster noted that crimes against whites by non-whites, even those of incredible savagery, are called “random.” In contrast, if a non-white is harmed or even takes offense because of something a white person does, it becomes an event of enormous moral importance. One unguarded word in a private conversation can become national news, the subject of viral tweets, and fodder for opinion pieces.

For this reason, people like Mr. Phillips are eager to invent “racist” incidents so they too can participate in the cosmic drama between Good and Evil. This is also why there are so many hate crime hoaxes. Journalists are desperate to find white evildoers so they can write something besides wearying accounts of black and brown crime. Tom Wolfe satirized the search for the “Great White Defendant” in The Bonfire Of The Vanities, and nothing has changed since.

Hoaxes and false accusations are undoubtedly driven by the desire to feel important or be a hero. Some people may just want to be petted and fussed over. Others may truly believe that lies in the service of a greater good are justified. They may have even deluded themselves into thinking they are telling the truth. Actions driven by faith sometimes walk a fine line between cynicism and idealism.

Hapless whites who concede the moral high ground will always be victimized. Whites alone practice “pathological altruism” and many whites, especially “elders,” don’t seem to understand that moral claims are psychological weapons. Every action of Mr. Phillips suggests that he deliberately sought to become a “victim” of racism. The media also deliberately promoted his claims. Whether they acted for materialistic reasons or twisted “idealistic” reasons, or both, is irrelevant. The truth doesn’t matter.

To be a white advocate today is to be an iconoclast. In the past, reporters have often affected a bold, questioning attitude towards authority and fawned over others who did so. Today, they act like priests, shaming the heretics who smile in the face of orthodox faith. In this case, that happened literally. Though white advocates must also be driven by idealism, our greatest weapon is irreverence. Like Saul Alinsky said in Rules for Radicals, “[T]he most potent weapons known to mankind are satire and ridicule.” Rather than bowing before totems, white advocates must do what reporters no longer will, and seek the truth.

White advocacy, especially among the young, must begin with cynicism, with distrust of the egalitarian faith. The supernatural, numinous aura given to non-whites should be stripped away. Though journalists pretend they are speaking truth to power, they are speaking power to truth. The church of the modern era is not based in Rome, but in Hollywood, New York, and Washington. Its creed is more inflexible and absurd than the most extreme caricature of Dark Ages Catholicism. Its precepts, superstitions, and commands motivate hundreds of millions throughout the West. Unfortunately, before whites can secure a future, this irrational, superstitious creed of White Original Sin must be overcome. Our mission is clear: “Ecrasez l’infame!”

Mr. Hood is a staff writer for American Renaissance. He has been active in conservative groups in the US. You can follow him on Gab.
< Right-Wing Comedian and Political Commentator Gavin McInnes Announces Defamation Lawsuit Against the SPLC
The Crime of Blackface >
Blog
Commentary
Videos
Podcasts
Follow us