Both Parties Defend Israel. What About Defending America?

The Republicans and Democrats can’t agree on much, but both President Donald Trump and the Democratic leadership agree that Rep. Ilhan Omar needs to watch her mouth. In response to Rep. Omar’s suggestion that Republican Rep. Kevin McCarthy supports Israel because of “the Benjamins” [money] and AIPAC [the pro-Israel lobbying group], the entire House Democratic leadership condemned Rep. Omar and declared, “we are and will always be strong supporters of Israel.” Senator Chuck Schumer said, “this kind of intolerance has no place in Congress — or in American society.” President Trump called on her to resign. Rep. Omar dutifully bent the knee and apologized, though not without retweeting complaints from her colleagues suggesting she faces unfair treatment because she’s a “woman of color.”

Rep. Ilhan Omar arguably crossed the line separating criticism of Israel from criticism of Jews generally. Yet the leadership of both parties demands support for Israel’s policies and AIPAC’s lobbying efforts. It may not be that way much longer. Recent polls suggest support for Israel among Democrats is collapsing, especially among non-whites and younger voters. In the future, Israel will be one of the most divisive issues within an unstable and ethnically diverse Democratic coalition. 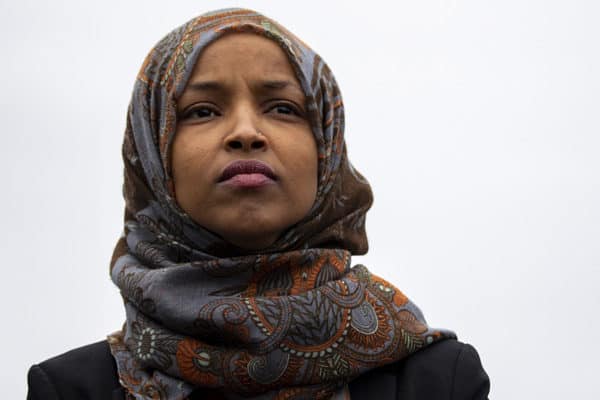 Americans and American interests seem utterly irrelevant in the entire debate. Republicans have “pounced” (to use the media term) on supposed anti-Semitism in the Democrat ranks, especially among the more diverse showpieces of the affirmative-action Congress. Yet conservatives are indifferent to anti-Americanism or racial hatred expressed against whites.

The Daily Caller recently exposed that Congresswoman Rashida Tlaib wrote for the Nation of Islam’s newspaper The Final Call in 2006. The Caller repeatedly called the NOI’s founder Louis Farrakhan’s “anti-Semitic,” but the term “anti-white” does not appear. The Nation of Islam’s widespread support among blacks was also not mentioned. The purpose of Rep. Tlaib’s article was to argue against the deportation of immigrants who commit “minor offenses,” which shows her focus was not opposing Jews, but furthering demographic change.

Keith Ellison, former deputy chair of the Democratic National Committee, was repeatedly accused of anti-Semitism because of his past affiliation with the Nation of Islam. Like Rep. Omar, Rep. Ellison also criticized the influence of the Israel lobby over American foreign policy, albeit at a private fundraiser. Jewish groups also urged Rep. Ellison to resign when it emerged that he had met with Louis Farrakhan even after Rep. Ellison was elected to Congress. Possibly because of these criticisms, Rep. Ellison recently retreated from national politics and became attorney general of Minnesota, rebuilding his political base at the state level. In contrast to the pushback against his “anti-Semitism,” Keith Ellison received comparatively little criticism for his anti-white, black nationalist past, especially his black nationalist articles and call for a black ethnostate. His 2018 endorsement of Antifa: The Anti-Fascist Handbook, a work that openly advocates making it “physically costly” for Donald Trump supporters, was met with relative indifference, at least from Democrats.

In 2018, Senator Cory Booker, now a presidential candidate, held a sign that read “FROM PALESTINE TO MEXICO, ALL THE WALLS HAVE GOT TO GO.” The Simon Wiesenthal Center was outraged. “Like so many other Americans, we were shocked to see Senator Booker in a photo holding a sign that equated the wall between the U.S. and Mexico to the barrier Israel constructed, which has successfully halted suicide bombers from wreaking more havoc on Israeli citizens,” it declared. Sen. Booker’s spokesperson defended him by saying that the senator was in a rush and didn’t see the part about Israel on the sign. “[H]e didn’t have time to read the sign, and from his cursory glance he thought it was talking about Mexico and didn’t realize it had anything to do with Israel,” said spokesperson Jeff Giertz. Apparently, this makes it better.

However, this led to Chelsea Clinton being “called out” herself by Anoa Changa, a black female progressive YouTuber. She accused Chelsea Clinton of having said something “hella racist” that “bordered on xenophobia” because of the use of the term “American.” After all, it might imply that Congresswoman Omar is not really an American. Miss Changa further instructed the former first daughter to read Robin DiAngelo’s White Fragility, which tells whites that even protesting about being called racist is a manifestation of white privilege. Chelsea Clinton promptly apologized for suggesting “anyone is more or less American” and declared humbly that she had read Professor DiAngelo’s book. In other words, anti-Semitism must be “called out,” but everyone has a claim to America. Also, whites are uniquely guilty of racism.

Rather than defending white gentiles, conservative activists have argued that Democrats haven’t done enough against Ilhan Omar for her anti-Semitism. Rep. Omar has retained her committee seats, in contrast to Congressman Steve King, who was punished by his own party for supposedly saying something “racist.”

Republicans stripped King of committee seats, meanwhile Democrats ignore Omar, who still sits on the Foreign Affairs Committee, and the growing anti-Semitism within their party. https://t.co/zY3fXVbRtA

Of course, Rep. King did not say anything racist but was misquoted by the New York Times. The Republicans simply went along with this smear. Nonetheless, they have received no credit. Like Virginia governor Ralph Northam, Democrats are turning the Ilhan Omar scandal to their own advantage.

Chelsea Clinton, apparently satisfied that Congresswoman Omar has been humbled, is now accusing the Trump Administration of advocating “white nationalism.” Journalists are also demanding that Republicans denounce figures among their ranks for “white nationalism” — even though the House condemned the ideology by a 424-1 vote just weeks ago. What’s more, no elected Republican officials — including Steve King — would ever call themselves white nationalists. “White nationalism,” in media parlance, appears to mean nothing more than mild opposition to political correctness, support for immigration law enforcement, and traditional American patriotism. While Israeli patriotism has bipartisan approval, American patriotism unfortunately does not.

America is no longer an independent nation with a real identity. Instead, it is a battleground where different tribes feud over resources. Whites do not participate in this competition. Many whites instead seek advantage individually by accusing each other of racism or anti-Semitism. Yet such strategies will no longer work when America is almost majority non-white and all whites are increasingly considered “racist.” Whites must stand up for their own group interests and those of America. Nobody else will.

Mr. Hood is a staff writer for American Renaissance. He has been active in conservative groups in the US. You can follow him on: Gab.
< Foreign-Educated Immigrants Are Less Skilled Than U.S. Degree Holders
Tommy Robinson Banned from Facebook and Instagram >
Blog
Commentary
Videos
Podcasts
Follow us