In the early 1990s, black Democrat Harvey Gantt ran against North Carolina Senator Jesse Helms. Mr. Gantt asked favorite son and University of North Carolina alumnus Michael Jordan for an endorsement — one black man to another. Mr. Jordan declined with the words, “Republicans buy sneakers, too.” Michael Jordan’s deals with Nike, McDonald’s, and other companies, and his ability to popularize the NBA to corporate and middle America were, in the words of sports sociologist David L. Andrews, a case of “racial avoidance” rather than “racial transcendence.” 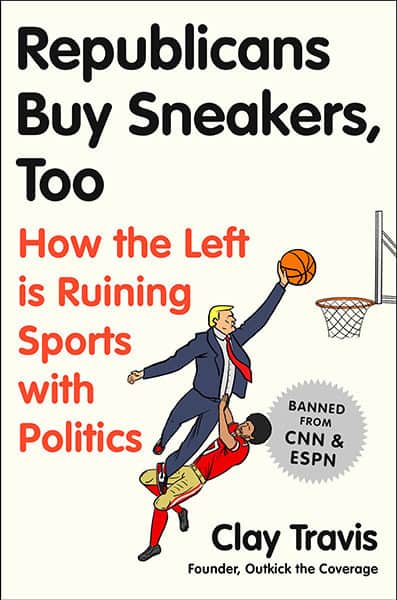 Times have changed. Today corporations cultivate a “woke” image, deliberately taking stances in favor of Black Lives Matter and “social justice.” Former NFL quarterback Colin Kaepernick is now the face of Nike’s 30th anniversary campaign precisely because of his protests during the US national anthem. His influence stretches beyond football. Interim USA Gymnastics president Mary Bono recently resigned, in part because of tweets criticizing Mr. Kaepernick and the Nike campaign. Black gymnast Simone Biles had blasted her for these tweets — and Miss Biles is also a Nike-sponsored athlete.

The deliberately divisive Mr. Kaepernick is a kind of anti-Jordan. At the Amnesty International Awards on April 21, 2018, he said: “American police officers continue to terrorize black and brown communities, abusing their power, and then hide behind their blue wall of silence. Laws allow for them to kill us with virtual impunity.” Others have followed his example. Black Carolina Panthers cornerback Eric Reid has said he is committed to “speaking for my people [blacks]” and that his protest is driven by racial grievances:

I’ll put it this way: Next year will be 2019. It will mark 400 years since the first slave touched the soil in this country. That’s 400 years of systemic [oppression], that’s slavery, Jim Crow, new Jim Crow, mass incarceration, you name it.

To his credit, President Donald Trump has made a huge issue out of the protest campaign and offers “Stand Up For America” football jerseys on his re-election campaign website. However, corporate America openly opposes the President. ESPN offered airtime to black sportscasters such as Jemele Hill to call President Trump a “white supremacist” and to praise the University of Missouri football team for threatening to go on a players’ strike because of a swastika drawn in excrement on a dorm wall.

It was the Mizzou players’ strike that prompted sports writer and radio personality Clay Travis to examine how the media promote this new “woke” agenda in sports — how it promotes mediocre non-whites and is constantly on the hunt for “racism.” In his new book, Republicans Buy Sneakers, Too: How the Left Is Ruining Sports with Politics, the long-time Democrat writes:

In over ten years of writing and talking about sports, I’d never given much thought to how politics impacted sports stories before the Missouri protests, but this story gave me pause. Why were so many in the sports media unwilling to call out the absurdity of the Missouri football team’s actions? Hell, why was their legendary coach not able to stop the protest from spreading? What was going on here?

That’s when it hit me. The sports media covering Missouri — and the head coach of the football team as well — were afraid of calling out the stupidity of the protest because they were afraid they’d be called racist if they didn’t support a black protest on campus.

This wasn’t about right or wrong; it was about white men being afraid of being publicly branded as racists. (p. 9)

Of course, once someone tumbles to this central fact of American life, there’s no going back. And this was the impetus for Mr. Travis to write this eye-opening account of the cowardice and racial truckling that now pervades sports journalism.

Clay Travis has been called a “well-paid darling of the alt-right” by Politico and “a racist conspiracy theorist” by Media Matters, but he is no white advocate. He would be uncomfortable reading American Renaissance. His entertaining website has the stated goal simply to “make sports great again” and “stop the left-wing politicization of sports. . . where ESPN spends more time acting like MSNBC than actually covering sports.” But he seems to be drifting our way:

Clay Travis is active on Twitter, where he consistently points out how sports coverage has been transformed into a leftist echo chamber rather than entertainment. Many sports fans share his annoyance with what’s happened:

When I went to the wedding of a law school classmate in the fall of 2017, I asked several friends there whether sports had gone insane politically or I had. Every single guy and girl attending the wedding whom I’d gone to law school with — you get to know everyone’s politics pretty well in law school — said what I wrote and said in 2018 sounded the exact same as what I wrote and said back in law school in 2004. Only back then I was a Democrat and now I call myself a radical moderate. I haven’t changed at all; social media has just caused everyone else to go insane. And here I am, the most reasonable person in sports. (p. 73)

All Mr. Travis wants is to convince ESPN to abandon politics and go back to showcasing highlights of games and spotlighting the stars. He wants athletes to put on their uniforms and go play the game. He wants journalists to cover sports as sports, instead of turning it into politics. However, the examples he piles up in this book suggest it’s too late.

Republicans Buy Sneakers, Too should have great appeal for white men alienated by the tone of sports coverage. The cover of the book shows Donald Trump dunking a basketball over Colin Kaepernick — a powerful metaphor. As more and more white men start to take the red-pill Clay Travis says he took, they will begin to see professional and collegiate sports in the same light he does, but instead of trying to reform it, they could simply walk away from it.

This is an excellent book for reaching white men who would never read about explicit race realism. Many of them base their identities on either their professional sports allegiance or their alma mater. Their self-image depends how their favorite team performs. If they begin to share Mr. Travis’s disgust with the political slant of sports coverage, it could shake them right out of fandom.

As Mr. Travis’s career shows, the radical drift of sports journalists and corporate America is driving whites towards race realism. The book is a gateway drug to more subversive, radical, and substantive ideas, and it’s all but certain it will give some future white advocates their start.

Contrary to what the media say, Mr. Travis is not part of the “alt-right.” He’s just another regular white guy who is waking up from the American dream. And he will wake up many more.

Paul Kersey lives in Denver, Colorado and is the author of Escape from Detroit.
< Guatemala Deploys Troops and Barbed Wire at Its Border
In France, a Push to Teach Arabic in Public Schools, Not Mosques >
Blog
Commentary
Videos
Podcasts
Follow us