What Do We Mean by “Biased Media?”

The article notes that the police believe the killing was a result of a road-rage argument, but that they have not ruled out the possibility of a hate crime. They haven’t ruled it out because during investigations, very little is ruled out. But there is no evidence to suggest it was a hate crime.

Why was there a vigil and not just a funeral? Vigils are usually for victims of terrorist attacks, natural disasters, or freak accidents. Have you ever heard of a vigil for someone who was killed in a road rage incident?

Maybe there was a vigil because people thought the girl, Nabra Hassanen, was killed because she was Muslim, not because she cut someone off. Titles of news stories certainly suggested that:

“Thousands Mourn Nabra Hassanen, the Virginia Teen Who Was Beaten to Death” — Time 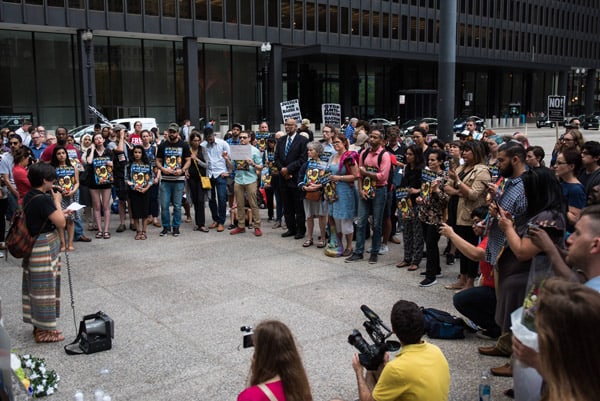 Demonstrators gather for a candlelight vigil for Nabra Hassanen and other victims of hate crimes and state violence held at Federal Plaza in Chicago. (Credit Image: © Max Herman/NurPhoto via ZUMA Press)

Needless to say, if this murder was a product of road-rage, the facts that the victim was Muslim and near a Mosque are superfluous. It’s as though the media were trying to insinuate something they know to be false. The Washington Post piece titled “Killing of Muslim teen stirs questions about hate crime prosecutions,” even notes in the second paragraph that police believe it was not a hate crime. The article then adds that the girl’s family want a hate-crime investigation. That is the “questions about hate crime prosecutions” of the title: The family believes it was a hate crime, but has no evidence that it was.

The man who killed this girl was an illegal immigrant from El Salvador. None of the stories listed above mentions this — not one. I searched each article for politically correct euphemisms such as “undocumented,” or even just “immigrant.” Most don’t even mention his distinctly Hispanic name, “Darwin Martinez Torres.”

Why would media outlets fail to mention this?

The difference between what happened and what is insinuated is stark. From the headlines, any reader would assume that a white bigot beat a Muslim teenager to death because of her religion. An accurate headline would have been: “Illegal Immigrant Kills Teenage Girl in Road-Rage Incident.”

The mainstream and leftist media don’t actually “lie,” or publish blatant falsehoods so much as distort the truth and skip over details or even entire stories that don’t fit their narrative.

Earlier this week, when a police officer at the Flint, Michigan, airport was stabbed in the neck by a man who screamed “Allahu akbar,” The Guardian ran a story about it titled, “Michigan police officer stabbed in the neck at Flint city airport.” The story never mentioned the words “Allahu akbar,” even though plenty of earlier stories had reported it. For some reason, the reporter thought that detail wasn’t important.

Perhaps it is a surprise The Guardian covered the knife attack at all. The further left a publication is, the less it covers terrorism or crime of any kind. For example, Jacobin and The Baffler never ran a single story about the terrorist bombing of the Ariana Grande concert in Manchester. And if an outlet isn’t reporting on a terrorist attack on that scale, you can be sure it is not reporting on black-on-white crime, the MS-13 gang, or violence against Trump supporters.

Media silence about rape is particularly shocking. The country is saturated with feminist media: Cosmopolitan, Bitch Media, Feministing, Jezebel, and Ms. to name some examples. Furthermore, every substantial leftist outlet has a “feminist beat,” and virtually every one of their female employees would call herself a feminist. However, I cannot find a single feminist or even leftist outlet that wrote about the case of Luis Baez.

Luis Baez went to trial in late April for raping a woman while driving for Uber under a fake name. He was in the country illegally, had been deported previously, and had two other rape charges in the past. The prosecution recommended bail be set to at least $100,000, and that he wear a GPS tracking device if he managed to post bail. The judge set bail at $2,500, with no GPS tracker. Mr. Baez scraped the money together, and has since disappeared. The judge was a woman.

This story was reported by local sources, tabloids, and conservative media. Nowhere can I find a story about this on anything remotely left-wing. Those outlets are too busy complaining about President Trump’s chauvinism, “rape culture,” and the lack of female authors in college curricula.

I am genuinely curious how a woman could decide to let a rapist go. What could this judge have been thinking? If there was ever a case of what feminist theorists call “internalized misogyny,” surely this is it. If ever there was an example of “rape culture” in our judiciary, it is when a judge lets a thrice-charged rapist get away. But no feminist would write about this because reporting on the crimes committed by illegals is racist.

Although the Left is certainly more guilty of this kind of biased reporting than the right, there is culpability all around. Ann Coulter’s most recent column contained a link to the American Renaissance map of hate crimes committed against Trump supporters. However, two websites that syndicate Miss Coulter’s column, Breitbart and Townhall, felt the need to delete the passage that linked to us. Although those outlets defend Trump supporters, if the documentation of attacks on supporters comes from “racists” like us, they eliminate the documentation.

This is what we call “biased media.”

Chris Roberts is the Director of Special Projects at American Renaissance.
< Dallas Schools, Long Segregated, Charge Forward on Diversity
The Truth About “All Men Are Created Equal” >
Blog
Commentary
Videos
Podcasts
Follow us