Respectable political opinion in the West is mostly nonsense. Sometimes, even race realists become so used to the stupidity that we are like the fish who never notice water. Sometimes it takes China, a self-respecting civilization-state, to expose our elites’ silly beliefs and shameless hypocrisy.

American journalists and politicians are in a moral panic over last week’s events. The supposed “failed insurrection” will be used to take away American liberties. However, the demonstrations on Capitol Hill were far tamer than the riots in Independence Square in Ukraine in 2013-2014 or in Hong Kong and Belarus a few months ago. Most American media outlets, left and right, treat those events sympathetically.

Here’s how The New York Times covered Hong Kong in July 2019, when protesters stormed the legislature.

For weeks, the Hong Kong protest movement had stayed on the high road. But protesters feel that nonviolence had failed and that a more confrontational approach was necessary to protect Hong Kong’s freedoms. https://t.co/Szh8MCg99s

Nancy Pelosi called pro-democracy demonstrations in Hong Kong “a beautiful sight to behold.” She may not have been endorsing violence, but you can’t blame the Chinese authorities for reminding her of it.

Nancy Pelosi referred to the violent Hong Kong mobs who threw petrol bombs and smashed stores “beautiful sight”, I wonder what she would call this guy who just paid a visit to her office, not looking that violent at all? pic.twitter.com/6ztPKfn7q1

.@SpeakerPelosi once referred to the Hong Kong riots as “a beautiful sight to behold” — it remains yet to be seen whether she will say the same about the recent developments in Capitol Hill. pic.twitter.com/91iXDzYpcO

China also exploits what Mao would have called our system’s inherent contradictions. This is how China’s Ambassador to Grenada, Zhao Youngchen, described his government’s actions in the Xinjiang region, home of the Uyghur Muslims.

For a long time, the Islamic extremists in Xinjiang forced the non-believers to believe in Islam, enforced the integration of administration and religion, banned Uyghurs from holding traditional Uyghur weddings, listening to modern music, dancing and other cultural activities, discriminated against women, and forced women to veil and wear black robes . . . . All kind and rational women in western world, don’t you think the protection of basic human rights of Uyghur women by the Chinese government is commendable?

China isn’t oppressing the Uyghur minority or crushing its culture; it fighting for women’s liberation against religious fanatics. By their own standards, shouldn’t liberals be cheering?

Just a few days ago, China’s American embassy tweeted that its campaign in Xinjiang had “emancipated” Muslim Uyghur women. What’s wrong with that tweet? When abortion was legalized in Argentina recently, there were huge celebrations and favorable coverage in The New York Times, The Washington Post, and the Associated Press. The latter called it a “feminist triumph that overcame a last-minute appeal by Pope Francis . . . .” A woman cries after the approval of the legalization and decriminalization of abortion in Argentina, in Buenos Aires, Argentina, on December 30, 2020. (Credit Image: © Matias Chiofalo/Contacto via ZUMA Press)

For years, American feminists have been dressing in costumes from The Handmaid’s Tale to defend abortion rights. The novel and television series are crude attacks on Christian conservatives who support big families. As The New Yorker reported, “WE LIVE IN THE REPRODUCTIVE DYSTOPIA OF ‘THE HANDMAID’S TALE.’” 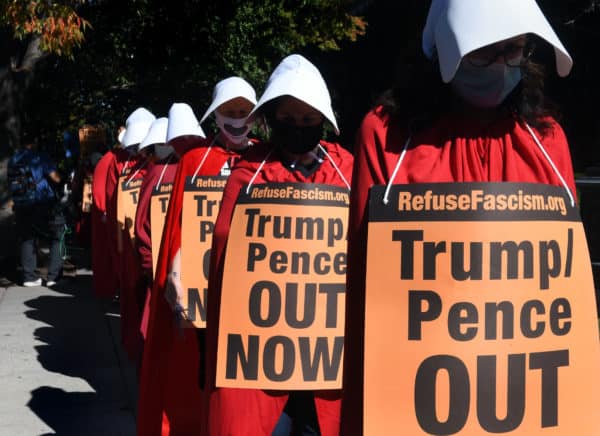 October 15, 2020, Washington, District of Columbia: Protestors dressed as characters in ‘The Handmaid’s Tale’ protesting the ongoing confirmation hearings for Associate Justice of the Supreme Court of the United States to fill in the vacancy left by the passing of Justice Ginsburg. (Credit Image: © Carol Guzy/ZUMA Wire)

Hungary’s government encourages large families. In February 2018, liberated woman and former Swedish Minister for Social Security Annika Strandhäll compared the policy to Nazism. She said it destroyed the “independence women have been fighting for.” Didn’t China give Uyghur women independence?

Apparently not. The New York Times published a column arguing what is being done to the Uyghurs is “genocide.” “Since 1949, the Chinese Communist Party has been gradually rolling out policies that threaten Uighur culture and identity,” writes Amelia Pang in “It Took a Genocide for Me to Remember My Uighur Roots. “There are financial incentives for interethnic marriages between Uighur and Han Chinese couples.”

But aren’t we supposed to think mixed marriage is a wonderful thing? In 2018, the New York Times rejoiced with this headline: “A Sign of ‘Modern Society’: More Multiracial Families in Commercials.” Why are the Times and The Guardian now complaining about efforts to encourage them in China? Besides, what do Uyghur culture and identity really mean? Perhaps there are “problematic” aspects to them. Since CNN tells us “There is no ‘White Culture’,” maybe there’s no Uyghur culture either.

You might argue that the Chinese government wants to eliminate the Uyghurs. You might even say that the Chinese Communist Party is trying to replace them. However, that’s dangerous talk, a paranoid conspiracy theory. How could political and cultural policies possibly have demographic consequences? It’s a ridiculous claim. I can’t put it better than Ambassador Yongchen.

（1/2）For more than 30 years, the birth rate of whites in the US and Britain has continued to decline, and the problem has became more and more serious.Could it be that these countries are also pursuing a policy of genocide of white people? Absolutely not！

Obviously, we know the game being played. We can say with confidence that Chinese leaders see the Uyghurs as a problem. The CCP is trying to keep Uyghurs from reproducing by destroying their culture and identity.  Western journalists understand this. They know the CCP’s policies weaken the Uyghurs and may ultimately destroy them.

However, China can claim innocence. China’s campaign against the Uyghurs is similar to the one Western elites are waging against whites. Many Western journalists are part of that campaign. Thus, China can continue mocking Western hypocrisy about “values” or “democracy.” What can Western politicians or journalists say back?

If I were Chinese, I might be angry that I can’t criticize Chairman Xi Jinping without suffering massive consequences. However, I’m American, and I’m far angrier that I can’t criticize Martin Luther King or, for that matter, the late George Floyd. I have no illusions that China is a free country, but neither is the United States. If anything, China’s system is better. I don’t want to live under the CCP, but I don’t want to live under Kamala Harris either. So I’ll laugh along with China’s diplomat-trolls, who are speaking the truths that we no longer can.

Only now can rioters in #HongKong see what their God is truly made of. pic.twitter.com/hxiACv0Y6b

Mr. Hood is a staff writer for American Renaissance. He has been active in conservative groups in the US. You can follow him on Gab.
< Exploiting the Capitol Riot to Kill Trump
University College London Apologises for Role in Promoting Eugenics >
Blog
Commentary
Videos
Podcasts
Follow us