The real political news was Laura Loomer’s crushing victory in the Republican primary for Florida’s 21st congressional district. Miss Loomer will almost certainly lose the general election, because the district strongly favors Democrats. However, she is the GOP’s official nominee in President Trump’s own voting district. President Trump couldn’t have ignored this even if he had wanted to. 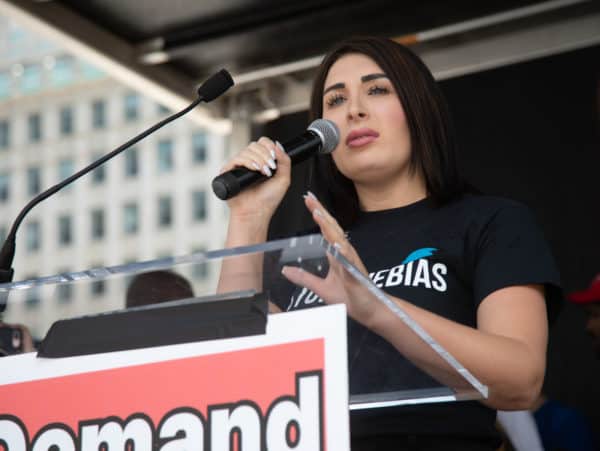 He congratulated her late last night and retweeted several stories celebrating her victory.

Great going Laura. You have a great chance against a Pelosi puppet! https://t.co/pKZp35dUYr

Congratulations to Laura Loomer on her primary win!

Is Laura Loomer a white advocate? No. Her main concern is opposing Islam, not standing up for whites. Nonetheless, Miss Loomer’s victory is a good thing. The most important issue is platform access. With it, we can build a mass movement. Without it, we must operate on the fringes and are cut off from any popular base, at least in the short-term. Even the most gifted activists can’t do much if their message isn’t heard.

Tech companies have cut off Miss Loomer from almost every platform. This includes Facebook, Venmo, Twitter, Instagram, Uber, Lyft, Uber Eats, PayPal, GoFundMe, Medium, TeeSpring, and, most ominously, Chase Bank. This isn’t just political discrimination. It’s an attempt to make ordinary life impossible. It should not be allowed in a free country. Whatever you feel about Miss Loomer’s politics, she’s right about this:

The Left understands deplatforming. Journalists — free speech’s greatest enemies — argued last night and this morning that the real problem was Big Tech hadn’t censored Miss Loomer enough, or had done it too late. Several “straight” newspaper stories implied that Miss Loomer’s candidacy was fringe because social media banned her. Perhaps they want an Electoral College of Journalists to pick candidates and election winners for us. They certainly don’t want voters learning about candidates journalists don’t like.

Social media from 2014-2018 was basically built for the Laura Loomers of the world, and we will be feeling the consequences of those years for a very long time.

Loomer was banned by Uber and Lyft after tweeting stuff such as, “Someone needs to create a non Islamic form of Uber or Lyft because I never want to support another Islamic immigrant driver.”

That’s who the President of the United States is openly supporting. https://t.co/PBNOHFq1V3

I’ve argued that Conservatism Inc.’s survival depends on control over what the grassroots sees and hears. It works in partnership with the Left against their common enemy: populists. If independent voices with a populist message can break through, the Beltway Right loses control, as it did during the 2015–2016 presidential campaign. Therefore, we shouldn’t be surprised that National Review called Miss Loomer an “infamous conspiracy theorist” and a “lunatic.”

It was a common theme.

Trump’s praise for Laura Loomer shows again, you can’t have Trump without Q. Welcome to the GQP, where people like Loomer and Taylor are held in higher regard by the party leader than folks like Mitt Romney. https://t.co/lNQRGoCTVU

I am disgusted and you should be too. https://t.co/uuSGicfttB pic.twitter.com/I3trYXOfxb

We shouldn’t be surprised or angry. Without censorship, grassroots Republicans would listen to others, including some white advocates. To survive as the System’s phony opposition, Beltway Right careerists need people like Miss Loomer silenced. If corporate oligarchs were purging someone like Miss Loomer in Belarus or Russia, these same people would call her a hero. Indeed, the reason there even is an opposition in “authoritarian” Belarus is because President Alexander Lukashenko did not have control over YouTube. Opponents therefore had a way to communicate to the people without going through approved channels. We don’t have that here. Media control means elites impose their values, morality, and beliefs on the population. That’s more important than guns or legal authority over police or soldiers. Media govern.

That’s why what happened last night was so important. Twitter, Facebook and other social media companies are now openly interfering in an election, refusing to give a major party nominee a platform. Since President Trump has endorsed Miss Loomer, this problem will not be ignored. These companies must respond. If they do not, and the GOP lets them get away with it, we should have no illusions about America being a free country. I suspect most of us already know this, but it’s about time grassroots Republicans started waking up too.

Mr. Hood is a staff writer for American Renaissance. He has been active in conservative groups in the US. You can follow him on: Gab.
< Analysis You Can Trust
Officer Makes Shocking Comment About 5-Year-Old White Boy Executed by Black Man >
Blog
Commentary
Videos
Podcasts
Follow us