[The] hostility of non-whites to symbols and icons of white heritage lays bare the fallacy of the ‘multiracialism’ our political and cultural elites promote. Its premise is that different races and ethnic groups can all ‘get along’ with each other, that they can live together in egalitarian harmony . . . . the reality is that the egalitarianism and universalism of the ‘civil rights’ era have led to the rediscovery of race and the rebirth of racial consciousness among non-whites and hence to the animosity that non-whites feel toward whites and their heritage. — From “The War on White Heritage,” by Samuel T. Francis, July 2000

Sam Francis was writing about the United States. Even he would probably not have imagined that 20 years later, the same animosity would be erupting in other countries as well. June 10, 2020, Brussels, Belgium: A few days after the Black Lives Matter demonstration and against pooling violence in the capital, the statue of the Belgian king Leopold II was vandalized, relaunching the national debate on the colonial question. (Credit Image: © Nicolas Landemard / Le Pictorium Agency via ZUMA Press) June 10, 2020, Leeds, Yorkshire, UK: A statue of Queen Victoria at Hyde Park in Leeds has been sprayed with graffiti including the words ”murderer” and ”slave owner”. The bronze sculpture on Woodhouse Moor in the Hyde Park area of the city also had the words ”coloniser” and ”racist” daubed on it. (Credit Image: © Andrew Mccaren / London News Pictures via ZUMA Wire) 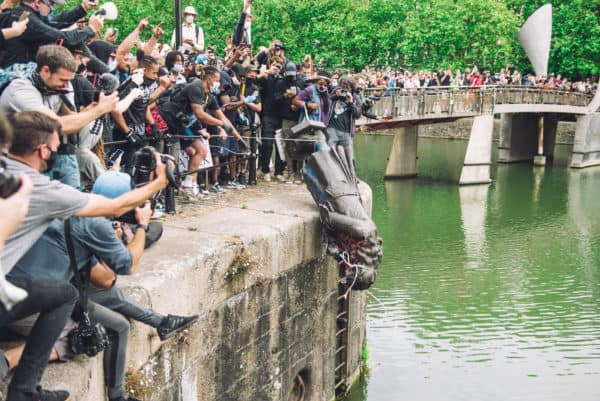 June 7, 2020, Bristol, England, United Kingdom: Protester speaks to a crowd from the pedestal that once hosted the statue of Edward Colston, a slave trader who lived in the 17th century and played a major role in the development of the city of Bristol. (Credit Image: © Giulia Spadafora / NurPhoto via ZUMA Press)