Who Kills Whom: The Truth About Black Crime

It’s not what the media would have you believe.

You may have heard about Cannon Hinnant. He was a five-year-old white boy, shot to death at point blank range earlier this month while he rode his bicycle. Right in front of his two sisters. The killer was the next-door neighbor, a 25-year-old black man, Darius Sessoms. This was just a local story until there was social-media outrage, and Breitbart News published an article called #SayHisName Trends After Media Do Not Report on Alleged Murder of 5-Year-Old Cannon Hinnant.

Big media then stepped in gingerly, sometimes not even mentioning race. The New York Times ran a short AP article about “the North Carolina boy being remembered for his big smile” — but no photo of the boy who smiled, and certainly no photo of the killer. That was an interesting contrast to a Times article called “White Man Accused of Brandishing Gun at Black Teenagers in a McDonald’s is Arrested.” The Times assigned a reporter to that story and ran a mug-shot, and put race right in the headline. Just for getting into an argument and waving a gun.

Cannon Hinnant’s father says race had nothing to do with the killing — maybe he’s right — but the police are mum so far on motive. Again, it’s an interesting contrast with all the famous killings when race goes the other way. George Floyd, Michal Brown, Trayvon Martin, Freddie Gray, Ahmaud Arbery, Philando Castile, Sandra Bland — all victims of racism, right? In fact, there is no evidence of a racial motive in any of those cases, but the media tell us over and over that it was pure racism.

Let’s look at a few recent interracial crimes. At the beginning of April, the first of two black teenagers, Arthur Fisher and Akime Truesdale was arrested for killing a white teenager. They were all driving together in the white teenager’s car. They stopped, got out of the car, and Arthur Fisher shot Logan Stacks to death (pictured below), and the two blacks stole the car. That’s about all we know. Was race a motive? No one’s even asking. 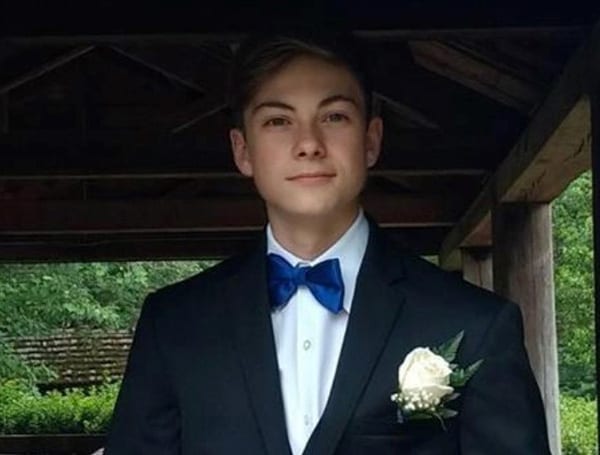 You may recall that on May 15, this young black fellow Jaden Hayden used 75-year-old Norman Bledsoe as a punching bag. The attack went on for several minutes; you get the idea. Mr. Bledsoe had a broken jaw, broken ribs and later died from the beating. Did race have anything to do with it? Don’t ask, don’t tell.

In May last year, in the Bronx, 23-year-old Temar Bishop beat a white woman bloody. Then he raped her, punched and kicked her some more, and left her unconscious, with a broken nose and broken teeth, vomiting blood. He brought over a friend to show her the wreckage, and explained: “She was a white girl. She deserved it because us minorities have been through slavery. They used to beat us and whip us.” There was clearly a racial motive — and that’s probably why you never heard about this. Temar Bishop may not know who George Washington was, but he’s had an earful about slavery. Why shouldn’t he take revenge?

Paul and Lidia Marino, in their 80s, visited the grave of their son in Delaware nearly every day. On May 8th this year, a black man, a stranger to them named Sheldon Francis, walked up to them right in the cemetery and shot them to death. Racial motive? Don’t ask; don’t tell.

On June 13th this year, 31-year-old Rashid Brimmage shoved a 92-year-old white woman off her feet in New York City. She hit her head on a fire hydrant and went to the hospital. Did race have anything to do with it? Don’t ask, don’t tell.

On July 6, 24-year-old Jessica Doty Whitaker and her fiancé got into an argument with some blacks when she said “All lives matter.” The two sides separated, but as she walked away, one of the blacks shot and killed her. She left behind a three-year-old. No big deal. No arrests.

Victor King was a professional bridge player living in Hartford, Connecticut, who decided to take in a roommate to help with rent. On July 25, he got into an argument about the rent with his black roommate Jerry Thompson. The next day Thompson killed him with a samurai sword and carved off his head. A racial incident? Don’t ask; don’t tell.

On July 30, black thief, 34-year-old Ezekiel Hopkins tried to steal a white couple’s car from their driveway in Windemere, Florida. When they came out to stop him, he beat John Savey to death with a baseball bat, chased the wife into the house and beat her unconscious. Then he beat to death John Savey’s 30-year-old son Jay. Here they are with a grandson. Racial motive? Don’t ask; don’t tell.

And, finally, just this month, Charles Morgan stopped off at a hotel in Florida. He phoned his wife to say he had made a new friend whom he met at the hotel. That night, his new friend, Alphonso Washington, killed him by stomping on his throat and stabbing him many times. Racial motive? No one’s asking.

Every one of these was an unprovoked, deliberate act of viciousness, whether it had a racial motive or not. The notorious killings of black people the whole country is worried about were different. There is no evidence that even one was unprovoked and deliberate.

Black deaths matter. White deaths don’t. And if you think that white people commit similarly vicious crimes against black people, then tell me about them. BLM makes a huge stink about ambiguous cases of white-on-black violence because they can’t find unprovoked, white-on-black viciousness.

Let’s look at the bigger picture for murder. Every year, the FBI publishes racial statistics on victims and perpetrators and puts them into this table. 2018 is the most recent year. It’s simple to calculate that the rate at which blacks committed murder was 7.5 times the white rate. And a black person was 15-1/2 times more likely to kill a white person than a white person was to kill a black person. There are data like this only for crimes with a single killer and a single victim. For mass killings, the black/white differences would probably be even greater.

The Department of Justice used to report on all interracial violent crimes in the country but stopped in 2014. Here are the most recent data: 2012 to 2013. Most violent crime is within the races, but if you do the calculations, you will find that blacks committed 560,600 violent crimes against whites and whites committed 99,400 against blacks. Because there are nearly five times as many whites as there are blacks, it means any given black person was *27 times* more likely to attack a white person than the other way around.

Here are statistics for 2019, this time from New York City’s annual police report. 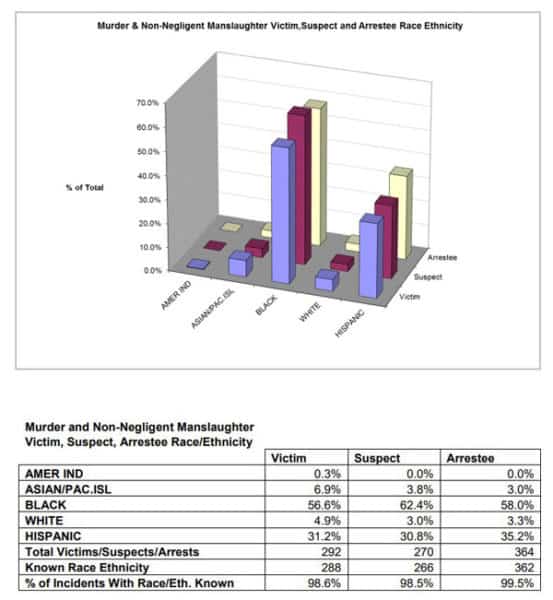 The labels that run along the bottom are racial groups, starting with American Indian and ending with Hispanic. The labels that run up the right side, are victims, suspects, and arrestees for the same racial groups. The vertical axis shows the percentages of each race in each category, and you can see that blacks are way ahead of everyone else. For murder, they were 56.6 percent of victims, 62.4 percent of suspects, and 58 percent of arrestees. The detailed numbers are in the table below the graph. Hispanics come next as victims, suspects, and perps, and whites and Asians are way behind.

The NYPD report includes race and population statistics for the city so we can easily calculate that a black was 26.7 times more likely than a white to be arrested for murder, and a Hispanic was 12 times more likely Those are startling figures.

Unfortunately, unlike the federal numbers we looked at earlier, the NYPD does not tell you how many whites were killed by blacks or the other way around. But if we go back up to the murder figures we just saw, take a look at the row for whites. If the percentage of white suspects or arrestees is lower than the percentage of white victims, it means that people of other races are killing some of them. In this case, if you compare white victims and white suspects, 39 percent of whites were killed by people of some other race, probably by blacks.

Here are similar figures for rape. Blacks are six times more likely than whites to be arrested for rape, and Hispanic five times more likely. But look at the suspects figure. Forty percent of white rape victims are raped by someone who wasn’t white.

Here are figures for robbery. A black person is 17 times more likely than a white to be arrested for robbery, and a Hispanic is 7 times more likely. And look at the percentage of white victims compared to white suspects. *Seventy percent* of whites are mugged by someone who is not white — most likely, black.

You can look at these numbers in a different way. If New York City were all white, and the additional whites committed crime at the same rate as the whites who live there now, robberies would drop by 85 percent and murders would drop by 90 percent. They’d practically disappear.

Chicago used to keep statistics like these, and they showed exactly the same pattern. In 2010, the city stopped publishing them. I wonder why.

The New York numbers are still right there on the internet. Anybody can find them. New York City is the media capital of America — crawling with journalists. How come not one of them has ever reported those numbers?

The media clearly want you to think America is a violently racist country, where black lives don’t matter. It’s a violent country alright, but white people — police or civilians — aren’t the problem. And to repeat, there is no evidence that Derek Chauvin or George Zimmerman or the men who killed Ahmaud Arbery had a racial motive at all. They may not have done everything right, but there is no evidence they had a racial motive — but the media are doing their best to convince you it was pure racism. When blacks kill or attack whites — and that happens a whole lot more often than the other way around, we’re not even supposed to hear about race. Much less think about it.

Who knows? If whites knew the facts about race and crime, they wouldn’t be marching in the streets against imaginary white “racism.” Maybe — just maybe — they’d even take their own side.

Jared Taylor is the editor of American Renaissance and the author of Paved With Good Intentions, White Identity, and If We Do Nothing.
< Harris’s Nomination Is a Dream Fulfilled
The Great Replacement: Baltimore >
Blog
Commentary
Videos
Podcasts
Follow us