Smart people are more capable than dullards. People with high intelligence excel across the whole range of non-rudimentary tasks, including organized violence — which is why the United States armed services have used intelligence testing for over a century to screen recruits and select candidates for special training.

Hamilton Gregory, a former Army officer, experienced first-hand a misguided Pentagon effort to relax mental standards for draftees. As he ably recounts in McNamara’s Folly, this Vietnam-era experiment, called “Project 100,000,” only confirmed that low native intelligence cannot be overcome by false hopes and good intentions.1 In today’s racially-charged environment, IQ denial leads to endless deception and conflict; in Vietnam, it got people killed. 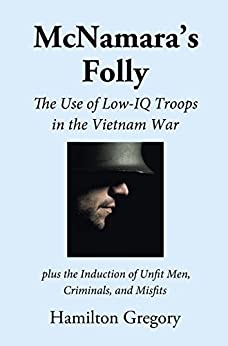 Project 100,000 was imposed on a skeptical military by Secretary of Defense Robert McNamara. By 1966, the war’s manpower demands were outstripping the supply of draftees and volunteers. McNamara thought he had found a way to solve the problem while giving “disadvantaged” young men discipline and training that would improve their prospects in civilian life.  All that was needed was to accept men for service whose scores on the Armed Forces Qualification Test (AFQT) ordinarily would mean rejection; then apply sophisticated training to equip them with the necessary skills.2

The AFQT separated recruits into five levels that corresponded with IQ scores:

Before Project 100,000, only recruits scoring in the top three categories were believed to be capable of military service. McNamara ordered the armed forces to accept inductees in Category IV and even some men in Category V. Mr. Gregory describes the thinking behind this decision:

With much fanfare at the 1966 national convention of the Veterans of Foreign Wars, McNamara unveiled a plan to “salvage” and “rehabilitate” 100,000 substandard men each year — hence the official title, Project 100,000. Called New Standards men, these disadvantaged youths — many from urban slums and rural poverty areas — would be molded into productive soldiers by being assigned to special training companies, which would be set up at each basic-training center to teach reading and arithmetic. Though the men may have failed these subjects in school, they wouldn’t fail now because the military was “the world’s greatest educator of skilled manpower.” It knew how to motivate men and possessed an impressive array of pedagogical gadgetry. McNamara, once considered one of the most brilliant men in America (he had made a name for himself as one of the Whiz Kids who revitalized Ford Motor Company), believed that he could raise the intelligence of low-ability men through the use of videotapes and closed-circuit TV lessons. “A low-aptitude student,” he said, “can use videotapes as an aid to his formal instruction and end up by becoming as proficient as a high-aptitude student.”3

Military professionals knew this was nonsense, but dutifully took in thousands of low-IQ recruits and put them through the same training they gave the more able inductees, adding remedial instruction when possible. The intractable problem was that even simple tasks were too demanding for low-IQ trainees. Mr. Gregory cites many examples from his personal experience with Project 100,000 trainees, such as this observation from a remedial “Special Training” course:

The third event was the run-dodge-and-jump. Running a zig-zag course, you had to dodge wooden obstacles as if you were a nimble football player sidestepping would-be tacklers, then jump a shallow ditch . . . Some of the Special Training men were befuddled by one aspect of the course: the wooden obstacles had directional arrows, and if you failed to go in the right direction, you were disqualified. A person of normal intelligence would observe the arrows ahead of time and run in the right direction without pausing or breaking stride. But these men would hesitate in order to study the arrows and think about which way to go. For each second they paused, they lost ten points.4

Even the simple concept of adjusting the pace of a run to its distance eluded some of the New Standards men:

To succeed in the mile run, you obviously needed endurance, but you also needed problem-solving ability. At the beginning, some of the men would sprint as if they were running a 100-yard dash. This caused them to become out-of-breath and tired, and they would slow down and struggle for the rest of the mile. They couldn’t grasp or apply what the sergeants told them about the need to maintain a steady pace (not too slow, not too fast) throughout the entire mile.5

Most of the 354,000 Project 100,000 inductees served in Vietnam and 5,478 died in the service — a fatality rate three times that of normally-qualified personnel.6 Project 100,000 troops — sometimes known as McNamara’s morons — were dangerous to themselves and others, often because their mental slowness turned to paralysis under stress. Instructions these men might have followed adequately when given enough time were too much for them when the pressure was on:

G.J. Lau, an Army veteran who served with the 1st Infantry Division in 1969, remembered Jerry (not his real name), who was a member of  “McNamara’s 100,000 — guys who were not exactly your best or your brightest.” One night “Jerry was out on the Quan Loi Green Line [perimeter] standing night guard. A very popular officer was out setting his men in position and was returning to inside the wire. There is a challenge procedure, just like you see in the movies . . . . You order the person to halt and then do whatever it takes to identify them as friend or foe, normally not a difficult task given the obvious differences between the NVA or VC and us.” But for some reason, “Jerry saw the officer approaching, shouted out ‘Halt,’ and then immediately opened fire, killing him on the spot.”7

“Jerry” disappeared from his unit the next day — shipped out, apparently, to protect him from his furious comrades. On another occasion, a slow-witted Marine failed to grasp the concept of a secure perimeter and paid with his life:

While serving as a battalion commander in Vietnam, Brigadier General William Weise watched a squad leader give an order for an ambush patrol. The squad leader gave a simple, clear order, but one Marine couldn’t remember any of the crucial details, including the password. That night, this Marine left the ambush to relieve himself without telling anyone. When returning, he wandered into the kill zone. The squad leader sprang the ambush and his squad killed him.8

Some compassionate (and prudent) officers and NCOs recognized the New Standards men’s limitations and looked out for them. One officer recalled keeping three Project 100,000 men out of combat: “I just kept them with me [in platoon headquarters] to watch them to make sure they didn’t hurt themselves, hurt anybody else, or have somebody else shoot them just to get rid of them.”9 An officer in the 101st Airborne Division remembered a New Standards man who “had a good personality” but was a “loose cannon” who could not be trusted with guard duty. “The first sergeant adopted him and made him a sort of company mascot,” assigned primarily to drive a truck and deliver people and packages. Even those assignments sometimes baffled the man, but he served his time in Vietnam without harming himself or his comrades.10 If they couldn’t be kept on base, covering for the deficiencies of Project 100,000 troops could be dangerous:

[Army veteran] George Buford . . . tells of an intelligent infantryman who survived Vietnam by actually volunteering to walk point whenever his platoon was on patrol — not because he was heroic, but because he feared that some of his low-IQ platoon mates might lead the unit into an ambush. “Dangerous as walking point was — and it was very dangerous — he felt that he was still safer doing it himself rather than trusting anyone else to do it.”11

Project 100,000’s human cost extended beyond these soldiers’ terms of service. New Standards men were disproportionately released with less-than-honorable discharges and behavioral problems that left them worse off than if they had never been in the military.12 Officers knew from the start that Project 100,000 was a bad idea, and many of them said so. Why, then, was it attempted? Was it merely a ploy to fill the ranks without regard to human cost, or a genuine case of misguided idealism?

McNamara’s Folly gives the program’s founders some credit for sincerity. The blank-slate view of human nature was in vogue then, as it is now; Lyndon Johnson’s Great Society programs assumed that the right kinds of government intervention would unlock the hidden potential in all citizens. As the author explains, McNamara was not “a heartless warlord bent upon using ‘marginal men’ as worthless throwaways;” but “in his optimism and naiveté, he failed to recognize that many low-aptitude men were indeed ‘brain-poor,’ incapable of ever becoming competent and efficient soldiers.”13 McNamara persisted in these illusions long after the tragic consequences of his experiment became clear to others.14

But blank-slate illusions were also a handy screen for cold calculation. The demands of the escalating conflict in Southeast Asia could have been met by drafting more sons of the American middle and upper classes. Congress could have cut student deferments and other entitlements that the privileged and their parents manipulated so successfully. But that might have eroded support for the war among the rich and influential. It was easier to put the screws to the powerless chumps of Appalachia and the urban ghettos. Mr. Gregory is undeceived about the capacity of our rulers for cynicism, and he gives some poignant accounts of the confusion and pain of families who could not understand why their hapless sons, who needed protection from even the hard knocks of civilian life, died uncomprehendingly in a distant war. (McNamara’s Folly is a measured and factual book, but also an angry and sorrowful one.)

Although Mr. Gregory says little about it, there was a racial angle to McNamara’s experiment.  If we look to sources other than McNamara’s Folly, we can find ample evidence of this.

In a dissertation published in 2013, Amy Rutenberg points out that “[s]upporters of Project 100,000, most notably former Assistant Secretary of Labor Daniel Patrick Moynihan, saw the program as a savior for black men.”15 In his famous report on the “Negro Family,” Moynihan wrote that 67.5 percent of black men failed armed forces screening tests, depriving them of the opportunity to acquire marketable skills and the veterans’ benefits they could have enjoyed when they returned to civilian life.16 Later, in an article published in New Republic, “Moynihan argued that if African Americans served in the military in proportion to their numbers in the population and if the unemployment rate for young black men was correspondingly reduced, then ‘the unemployment rate for non-white males in the relevant age group [in 1964] would have been lower than that for whites.’”17 McNamara expressed similar views, stating in a 1967 speech that military service would give black men pride and release them from “the inner ghetto of the poverty-scarred personality.” Accordingly, “during the five years [Project100,000] lasted, an average of 40% of NSM [New Standards Men] were black. This figure contrasted sharply with the black 8% of the Service population. DOD [Department of Defense] certainly heeded Moynihan’s call to overrepresent black men in the Armed Forces.”18

Black leaders of the time were appropriately skeptical of the Pentagon’s efforts at racial improvement. “To many, the idea that black men ‘deserved’ larger military participation seemed a transparent excuse for sending even more black men to die in Vietnam.”19 The tragic outcome for many black Project 100,000 recruits confirmed this skepticism.20

The program was mercifully terminated in 1972, but IQ-denialism lives on in government, the workplace, and the Academy. As in Vietnam, much of the impetus for ignoring the reality of native intelligence is racial, and the results are depressingly predictable. Mr. Gregory’s book is a cautionary story of one such effort that was quietly shelved, and from which no larger lessons were drawn.

View all posts by Hugh Kennedy

Hugh Kennedy is an attorney who served as an officer in the U.S. Air Force between 1968 and 1973.
< I Am a Race Realist
Dissenting Voices >
Blog
Commentary
Videos
Podcasts
Follow us