David Horowitz first made a name for himself as the radical — indeed, communist — co-editor, with Peter Collier, of Ramparts, the New Left’s leading magazine in the 1960s, and later as a born-again conservative. He is the founder and editor of Heterodoxy, a monthly magazine devoted to exposing and dissecting “Political Correctness,” and chronicler of his own misadventures as a red-diaper baby in his autobiographical Radical Son. In the latter part of his career as a neoconservative, Mr. Horowitz has become well known also as one who does not spare the literary rod in chastising “black racism” and the transparent double standard by which liberals, white or black, typically evaluate racial injustice when committed by blacks rather than whites. This is the theme of the essays that make up his most recent book, Hating Whitey. 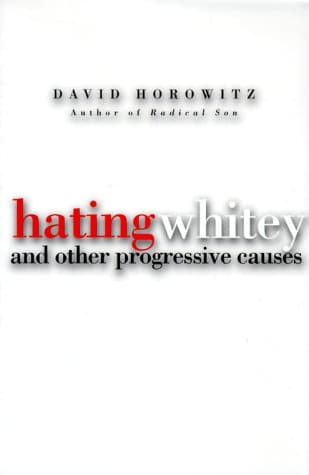 Hating Whitey is composed of rather brief columns from Salon, the online magazine for which Mr. Horowitz regularly writes, and one of the few non-conservative magazines of any kind that will allow him to write for it at all. As a kind of literary treasure trove of reflections on such subjects as black racism and double standards, the fraudulence of the Establishment Left, and the sheer viciousness of black criminals, especially when hidden under radical garb as “Black Panthers,” Mr. Horowitz’s collection can’t be beat. He offers chilling accounts of Huey Newton and the Panthers, for whom in his leftish days Mr. Horowitz served as an adviser, and of the black murderer Geronimo Pratt, also a Panther until Newton and his pals kicked him out and who was released from prison in 1999 due to the efforts of his lawyer, Johnnie Cochran. But neither the brutality of black racial hatred these essays recount nor the silence of the establishment press about it is isolated. As Mr. Horowitz explains:

In the wake of the Million Man March, blacks burned a white man alive in a Chicago neighborhood, with no accompanying press comment. In Illinois, three blacks murdered a pregnant white welfare mother and her two white children, while ‘rescuing’ her black fetus by cutting it out of her womb. No one called the attack racial even though a second black child of the woman was spared. A black city worker in Fort Lauderdale gunned down five white co-workers, again without the press intimating a racial element might be involved, even though several survivors testified the killer had used anti-white epithets in the workplace before. In Harlem, seven white customers were burned alive in a store torched by a black racist after Al Sharpton and other racial demagogues had led protests against its presence in the neighborhood because the owner was white. This did elicit some editorial commentary, but without a single acknowledgment by any public figure of any color that the black community might have its own racial problem.

One wonders which is more chilling — black racial hatred itself or the outright mendacity and deliberate indifference with which the press and the fashionable left cover it up.

Yet there is a major problem with Mr. Horowitz’s account, which is that for all his candor in discussing such matters and for all his rethinking of the leftism in which he was bred, to this day he still just doesn’t get it about race per se. Thus, as he tells us in his introduction, “The tolerance of Salon’s editors for the views in this book should not be surprising, since they are the same views once advanced by the civil rights movement [Martin Luther] King led.” Mr. Horowitz still seems to thinks that “race” is largely a fiction, and nowhere in the book does he mention, much less discuss, The Bell Curve or the work of Philippe Rushton, Arthur Jensen, Michael Levin, Richard Lynn, and others on racial differences in mentality and behavior. Nor, for all his exposure of the lefties whom he knew and worked with in his red days, does he have anything to tell us about the “civil rights movement” itself — although we know very well that it was no less a collection of crooks and frauds than the New Left. Mr. Horowitz is exclusively concerned with what he believes is the “betrayal” of the civil rights movement by black leaders today and their indulgence of black racism or their outright endorsement of it. Hence, his columns center only around black-white antagonisms and ignore the impact of immigration and the emergence of anti-white Hispanic racism.

What Mr. Horowitz does not appear to grasp is that his beloved “civil rights movement” was merely the opening stage of a continuing and ever-intensifying revolution — Lothrop Stoddard’s Rising Tide of Color, or what the late sociologist Robert Nisbet called the “racial revolution” in which “color has come close to replacing nationality and economic class as the major setting for revolutionary thrust, strategy, tactics, and also philosophy . . .” Like all opening stages of revolutionary movements, that of the racial revolution was fairly moderate, demanding only “equal rights” and “color blindness” in law and policy. King was the leader and hero of this stage of the revolution, and in this respect it was little different from analogous stages of the French, Russian, and other revolutions.

But, again like all revolutions, it quickly moved on. Once legal racial barriers had been dismantled and equality before the law granted, the revolution began to unmask itself as a demand for racial power pure and simple. Equality of result and outcome as well as “tolerance,” “diversity,” and “racial reconciliation” have now come to serve as rationalizing slogans that are useful for discrediting “white supremacy” and “institutional racism” but are conveniently muted or abandoned entirely when non-white racial power and interests are at stake.

The movement from King’s “color blindness” to present-day Afro-racism is no more bizarre than similar transitions in other revolutionary processes; Orwell’s “All animals are equal — but some are more equal than others” is the classic satire of this pattern. Nevertheless, non-revolutionary power structures are constantly befuddled by it, as is the white establishment today. Having granted the legitimacy of the early stage of the revolution and swallowed the sugar-coated rhetorical and ideological premises of egalitarianism and environmentalism, the old regime finds it all but impossible to resist the demands of the later stages of the revolution that exploit those premises for anti-white racial purposes — even if it wanted to resist those demands in the first place.

Of course, it is to Mr. Horowitz’s credit that he has resisted and refused to embrace the more extreme anti-white implications of the “color blindness” he espouses, and it is because of his resistance that he exposes the racial revolutionaries at all. But because he does not really seem to understand that it is a revolution continuous with the civil rights movement, he misses much of what needs to be said about it and in the end has very little to tell us about how to resist the revolution effectively.

In fact, pretty much all that Mr. Horowitz can do, given his continuing commitment to King’s “color blindness” and his satisfaction with present-day American society, is bemoan and expostulate about the trends that have made “color blindness” a bad joke, and exhort us all to get back to good old Dr. King’s wisdom. Of course, the reason color blindness has become a bad joke and the reason that what King preached was wrong (whether he knew it or not) is that race is real. It is precisely because it is real, rooted in nature and evident in behavior, that normal human beings cannot be “blind” to it and cannot pretend indefinitely that it doesn’t exist or isn’t important.

That is also why just about every other race has now rediscovered it and is in the process of using it to build a mass base mobilized around racial consciousness for the revolt against the civilization that whites have created and ruled. Since Mr. Horowitz’s commitment to “color blindness” and his denial of race mean that he cannot and will not invoke white racial identity and consciousness as a counter-weight to non-white racial forces, about all he can offer with which to resist the anti-white racial hatred and quest for non-white racial power he accurately perceives are expostulation, exhortation, and bemoaning. The damage his insistence on color blindness does is that it prevents whites who become aware of the racial revolution from understanding that the construction of their own racial consciousness — not the denial of it — is the only realistic means of resisting a revolution directed against them that will certainly lead to their political and cultural dispossession and may eventually result (if contemporary anti-white racial hatred and viciousness is any indication) in their physical destruction.

Mr. Horowitz has written a compelling and often powerful account of the rising tide of color that, as it becomes a majority in the United States and threatens to engulf other white societies, will paint a dark future for white people everywhere in the world. It is unfortunate that as well informed about it and as experienced as he is in its inner circles, he does not more fully understand the force that really drives the racial revolution he at first assisted and later deserted.