The Opioid Crisis Has Affected More Than 2 Million Children 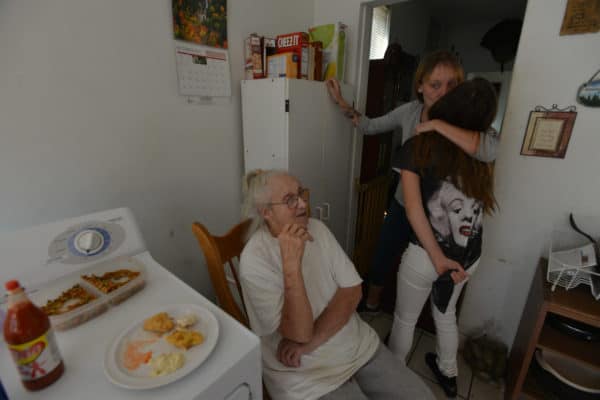 Saleha Young, a heroin addict, kisses her daughter Samantha, 12, after they have lunch with Saleha’s mother Margaret, 84, at her house in the East Side of Hamilton, Ohio, where heroin addiction is rampant. Margaret, who understands her daughter’s fierce addiction without judgement and accepts she can do little about it, has legal custody of her granddaughter because of her daughter’s addiction and run-ins with the police. They share the house with Saleha’s father and Margaret’s brother. (Credit Image: © Miguel Juarez Lugo / ZUMA Wire)

At least 2.2 million children had been affected by the U.S. opioid crisis by 2017, with that total poised to grow and the consequences likely to be felt for years to come, a new analysis shows.

Parents’ opioid use is the primary reason children are affected by the crisis – whether they’re living with an addicted parent or have been removed from their home, or their parent is incarcerated or has died of an overdose – according to the report from the United Hospital Fund, a health policy nonprofit based in New York. Still, an estimated 170,000 kids had opioid use disorder themselves or had accidentally taken the drugs in recent years, the analysis says.

The children of the opioid crisis are likely to incur higher expenses than others during childhood – an estimated $117.5 billion in health care, special education and child welfare spending – along with another $62.1 billion in societal costs during adulthood, the study says.

“Even if we could stop the epidemic cold in its tracks today, the ripples will last long into the future,” says Suzanne Brundage, the study’s lead author and director of UHF’s Children’s Health Initiative.

Last year, President Donald Trump signed the Family First Prevention Services Act, which seeks to keep children with their parents and relatives rather than placing them in foster homes. The law enables states to use federal foster care and adoption assistance funding for mental health, substance abuse and parenting skills programs for parents at risk of losing their children. It’s still unclear how the law will be implemented, though, as many states have delayed doing so.