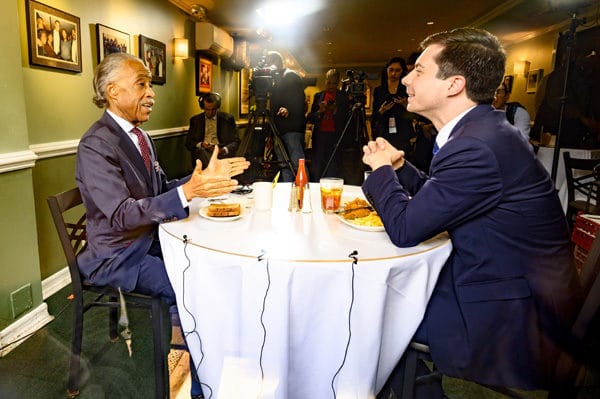 On a recent Sunday morning, Pete Buttigieg stood before rows of black churchgoers, a group he and the other Democratic 2020 candidates must win over for a reasonable chance of capturing their party’s presidential nomination.

“I know what it is to look on the news and see your rights up for debate,” he told the crowd gathered in the sanctuary of an African Methodist Episcopal events center in Rock Hill. “I also know what it is to find acceptance where you least expect it and to find compassion when you most need it.”

As Buttigieg, the mayor of South Bend, Indiana, highlighted his personal knowledge of the marginalized American experience, and as he quoted verses from the books of Proverbs and Matthew, he did not overtly describe himself as gay or mention the husband he adores. He was trying to connect with a group of potential voters who, on the whole, have been skeptical of his candidacy.

Buttigieg, 37, may have won over many members of the mostly white political commentariat in New York and Washington, and recent polls of Iowa’s overwhelmingly white electorate put him at or near the front of the crowded Democratic field there. But, at the start of October, a poll referenced in The Charleston Post and Courier found Buttigieg had no black voter support in the state and just 4 percent support overall.

That has left two questions generating a stream of television commentary, social media memes and heated disputes. How much of Buttigieg’s difficulty with black voters, and in many cases religious voters, is because of his sexuality? And, given that black voters make up about 20 percent of the Democratic Party’s base nationwide, why is he still considered a serious contender for the nomination when he doesn’t have black voters’ support?

Rep. Jim Clyburn, the veteran African American congressman from South Carolina who serves as House majority whip, told CNN recently that there was no question that support for an openly gay candidate was a “generational” issue for older African American voters and would affect Buttigieg’s popularity in the state.

There are so many factors for black voters to weigh in 2020 that a candidate’s sexuality is unlikely to be the deciding one, according to political and public opinion experts, as well as more than a dozen black voters in South Carolina who recently spoke to NBC News.

But that doesn’t necessarily translate to support for Buttigieg, whose biography includes more than just his sexuality. Buttigieg is arguably 2020’s most overtly religious Democratic contender, a combat-tested veteran and the mayor of a 100,000-person city who has never been responsible for national policy. He’s a moderate, a let’s-improve-the-system-not-explode-it candidate.

Black voters have historically made the pragmatic choice in both primaries and presidential elections. In the primaries, they’ve often selected the least bad option, the white Democrat who can win and has said the fewest or the most tolerable of the offensive or dismissive things often said about black experiences and political priorities. In general elections, that means they’ve supported candidates promising the greatest push for equality, experts say.

Buttigieg arrived in South Carolina about a week after the leak of results from three focus groups commissioned for his campaign. The McClatchy News Service reported that interviews with 24 uncommitted black voters in Columbia, ages 25 to 65, revealed a pattern of tolerance for Buttigieg rather than full acceptance of him.

A flurry of stories about black voters, sexuality and values followed, raising questions like: Was it correct to label black Democratic voters in the South social conservatives? Could 24 voters really speak for millions? Who had leaked the information, and to what end? And why were black voters allegedly weighing down the otherwise rocket-like Buttigieg campaign?

“As Pete connects with black voters across the country, we find that they identify with his message and his vision to tackle the urgent challenges they face,” Marisol Samayoa, a spokeswoman for the Buttigieg campaign, said in a statement.

In the 2000s, the majority of black voters moved politically from activist and far-left positions to the center of the Democratic Party, said Gillespie, the political scientist. But their sense of what is most important has consistently been informed by a struggle for equality.

Religious black voters — the people some political commentators have dubbed the party’s conservatives — are also committed to the same issues. A full 79 percent of black Protestants identified health care as their chief political priority in the Public Religion Research Institute poll in October. White evangelicals put terrorism as their top concern, an issue that didn’t make the top five for black Protestants.

Buttigieg’s brand of centrism with change that can be measured by inches may fall short of what some progressive black voters hope to see in a 2020 candidate, Gillespie said. These are weaknesses “that black voters may see particularly well,” she said.

When trying to woo more moderate voters, Buttigieg also has to compete against the other moderates in the race, chiefly Biden, the popular former vice president elected alongside the first African American president. In October, a series of polls of South Carolina Democratic voters — a group that’s mostly black — put Biden 21 to 39 points ahead of Buttigieg. Then there are the two black moderate candidates: Sens. Cory Booker of New Jersey and Kamala Harris of California.

Buttigieg must contend with questions about his record on race, police accountability and crime reduction in South Bend, which came to the forefront after police there shot and killed a black man in June. The city’s violent crime rate is double the average of comparably sized cities. And the number of shooting victims in the city has nearly doubled since 2018. Buttigieg was also criticized for firing the city’s first black police chief, who viewed himself as working to expose and remove racist white officers, in 2012, the year Buttigieg took office. Buttigieg is widely perceived as not having handled the situation well.

Asked about what will prompt them to pick a candidate, many black and religious South Carolina voters pointed to the desire to defeat President Donald Trump, as well as to specific issues, including eliminating gender and racial pay gaps.

Topics: Black Culture, Elections, Race and Politics
< Our Racism Killed Tamir Rice
Acts of Random Violence Are All Too Real in Many Communities >
Blog
Commentary
Videos
Podcasts
Follow us