The Story of One Black Slave Owner

What was life like for a black slave owner? In Andrew Durnford, David O. Whitten has drawn on the correspondence between a free, mulatto master and his lifelong white friend to give us a glimpse into a forgotten corner of the American past.

Andrew Durnford was said to be the child of a free black woman and her wealthy English lover, Thomas Durnford. Thomas gave his son an aristocratic education that included French, mathematics, and medicine. Although the most that illegitimate mulatto children could usually hope for was freedom upon the death of their fathers, Andrew inherited both Thomas Durnford’s name and a portion of his estate. He subscribed to periodicals in both French and English, and valued education enough to send his own son to Lafayette College in Pennsylvania. 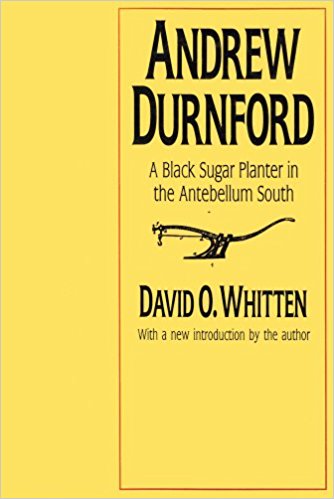 John McDonogh had been a close friend and business partner of Durnford’s father, Thomas. When Thomas Durnford died, owing almost $10,000 to McDonogh, McDonogh was granted curatorship over the estate. His association with Durnford’s son was a crucial advantage to the young mulatto. In 1831, McDonogh set up Andrew Durnford as a planter, selling to him — on credit — 14 slaves and 672 acres of land along the Mississippi. McDonogh clearly had an abiding affection for Durnford and appears to have treated him as a social equal. He helped Durnford acquire yet more property, and by 1835, Durnford owned 77 slaves and more than 1600 acres of land.

Durnford was not a successful businessman. He was able to cover the costs of running his plantation for only two out of 26 years. He owned more slaves than he needed and, according to Mr. Whitten, “would have enjoyed greater financial returns had he put his capital out at interest and employed himself at salary.” He lived comfortably, but depended on the kindness of his creditor. When he died he still owed $13,000 to John McDonogh’s survivors.

Mr. Whitten writes that Durnford was a kindly master, but he appears to have had no illusions about his property. On one occasion he wrote of his “rascally Negroes,” saying “I have to threaten them severely to get them to do their dutys . . .” When slaves were incapable of a job, he often hired Dutch or German free hands. When slaves escaped, Durnford sent his overseer to track them down. Of one disobedient slave he wrote, “I ordered five round [lashes] to be given him yesterday . . . He is a wicked fellow.”

Though John McDonogh freed 85 of his blacks and set them up with jobs in Liberia, Durnford thought it was foolish to free slaves, since he thought they could not care for themselves: “There is not one in a hundred that could save money. They have not the moral courage to deprive themselves of luxuries.” During his life he freed only four slaves — a laborer in his 50s and three mulatto children. McDonogh freed all but a few slaves in his will, but Andrew Durnford freed only one at his death — an illegitimate child.

Durnford’s legitimate son was not a kind master to the slaves he inherited. “The race relationship between this mulatto and the slaves may have been more severe than that found between slaves and white owners and overseers,” writes Mr. Whitten. Slavery was, indeed, a vexing question, scarcely illuminated by the clichés with which it is invariably addressed.

View all posts by W. Wilson